Forestry dashboard presented at COP26 shows that 9 million trees were cut down since the beginning of the summit. The forest’s destruction interferes with the rainfall regime and increases greenhouse gas emissions.

Between October 31 and November 5, in the first six days of the 26th United Nations Conference on Climate Change (COP26), in Glasgow (Scotland), over 9 million trees were cut down in the Brazilian Amazon.

According to INPE alerts, deforestation in the Legal Amazon approaches 800 thousand hectares (8 thousand km²) so far in 2021. This area is equivalent to that of the city of São Paulo including its Metropolitan Region, which comprises 39 municipalities.

These figures come from the forestry dashboard run by PlenaMata, an initiative by MapBiomas, InfoAmazonia, Natura&Co, and Hacklab in the struggle for forest conservation and to end to logging in the Amazon. The tool uses the daily alerts on deforested area from the DETER system, operated by the National Institute for Spatial Research (INPE), as its basis. It then multiplies deforested areas by the number of trees estimated by science for each hectare and includes a real-time estimate of how many trees are being cut. 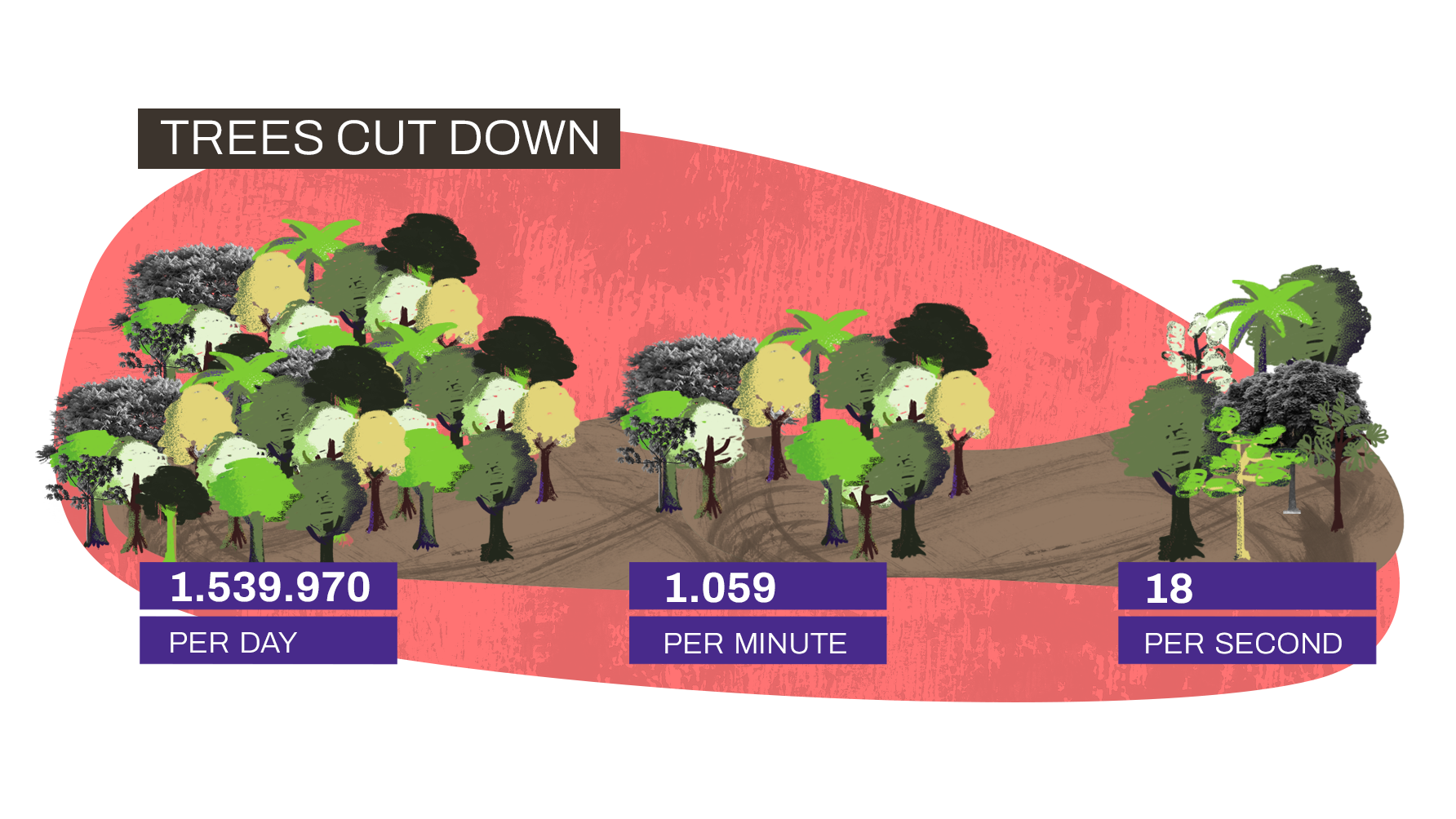 Illustration: PlenaMata/Julia Lima
The counter numbers change according to the date of detected alerts. In this illustration, estimates of trees cut down on November 5th, 2021.

“The reference is that there are, on average, 565 trees in each hectare in the Amazon Basin. The data comes from one of the most extensive studies carried out on trees in the South American rainforest”, detailed Tasso Azevedo, general coordinator of MapBiomas.

The study cited by the expert was carried out by more than a hundred Brazilian and foreign scientists and published in the journal Science in October 2013. It estimated the number of trees per hectare and mapped 16 thousand different species in the Amazon. Of this total, 227 types of plants account for half of all trees in the South American forest.

Standing trees are vital to halting climate change and ensuring rain and water supply for the population. “Each tree releases an average of 500 liters of water into the atmosphere per day. Almost 500 million trees cut in the Amazon this year means 250 billion liters that do not go through evapotranspiration, and this will make it rain less in other regions of Brazil”, recalled Tasso Azevedo in an interview with ClimaInfo at the Brazil Climate Hub at COP26. Brazil faced an intense drought this year, according to data from Cemaden. 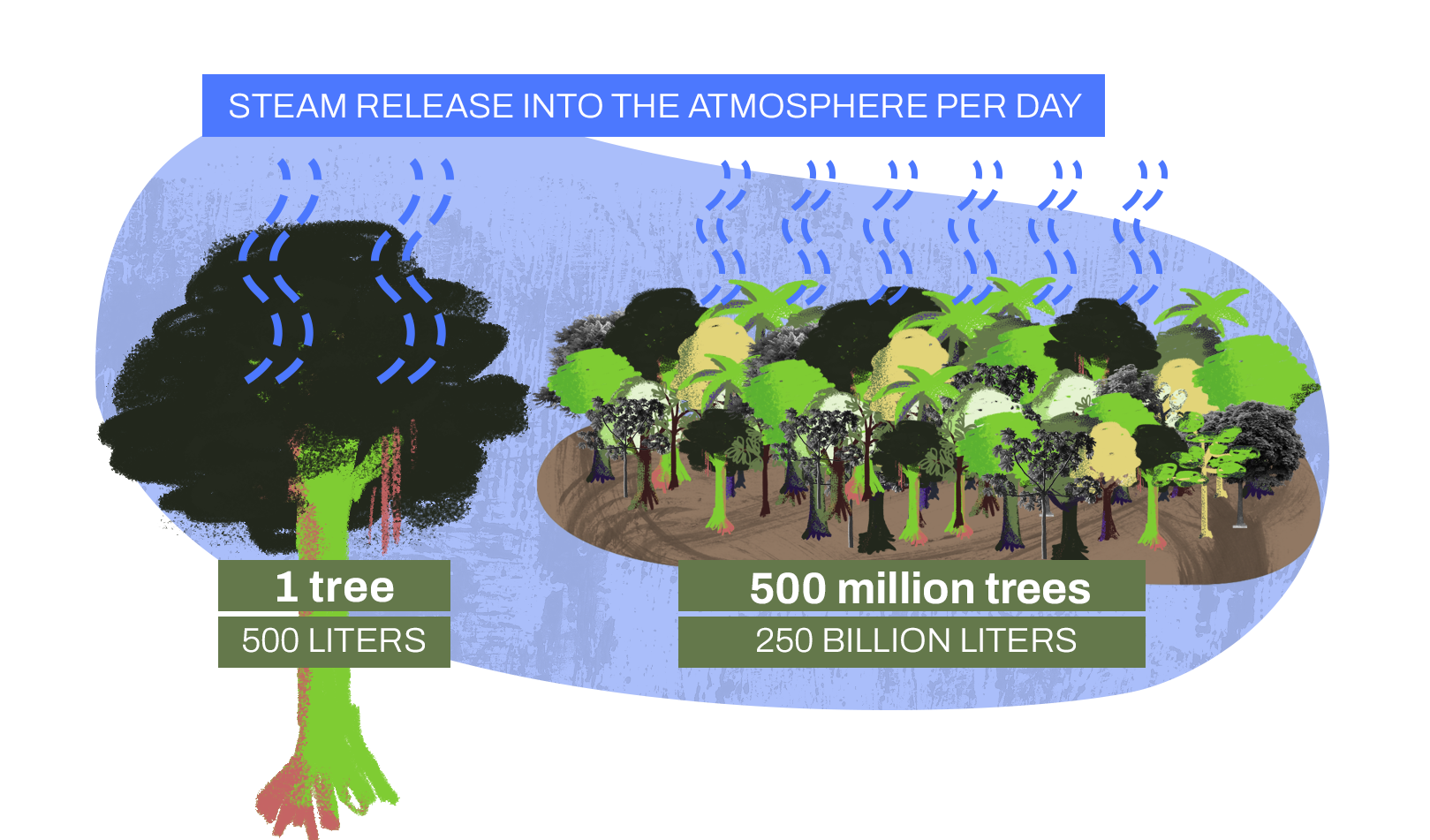 Illustration: PlenaMata/Julia Lima
250 billion liters of water stopped being released into the atmosphere by the 500 million trees cut down in the Amazon in 2021, which makes it rain less in Brazil.

A study published in Nature Climate Change in September 2019 estimated that deforestation and climate change could eliminate up to 58% of the arboreal species in the Amazon by 2050. Of the total, 49% are at risk of extinction. The study also estimated that half of the original Amazon forest could survive in the period, while the rest could be highly fragmented, where only 30% of the native vegetation would remain.

The millions of cut down trees accounted for in PlenaMata’s dashboard bloat Brazilian greenhouse gas emissions. Brazil is the fourth country that contributes the most to the increase in the global average temperature since 1850, according to an analysis by Carbon Brief. Deforestation and agriculture now account for almost 70% of its current emissions.

“We need zero deforestation now, no matter if it’s illegal or legal. Not just in 2028. All of Brazil is suffering from the lack of rain and other impacts caused by deforestation in the Amazon. It is necessary to preserve it for the good of the country and the planet”, emphasized Luciana Gatti, coordinator of the Greenhouse Gas Laboratory at INPE.

A study led by the researcher found that logging and burning made the Amazon rainforest stop absorbing carbon and become a source of greenhouse gases. The most deforested regions of the forest emitted 10 times more carbon than areas with deforestation below 20%. These areas also had a reduction in rainfall proportional to forest loss and a significant increase in temperature.

But it is possible to reverse the upward trend in deforestation in the Amazon and prevent it from jeopardizing global efforts to maintain climate balance. “Zeroing all deforestation and allowing forest regeneration would offset emissions from the agricultural sector. The main use of land in Brazil today is pasture. If better managed, these areas can absorb carbon. Measures like these would help the country to neutralize its emissions in the short term”, assesses the general coordinator of MapBiomas.