Recalled less often than the towering rain forest, the Amazon’s mangroves cover 11,200 square kilometers in Amapá, Pará, and Maranhão. The area is equivalent to eight times the territory of the city of São Paulo and accounts for 80% of the country’s mangroves, the range of which extends to the municipality of Laguna, in the southern state of Santa Catarina. From there to Rio Grande do Sul, similar formations have different natural characteristics and are called marismas (marshes).

Spreading from the coast kilometers inland through brackish rivers, mangroves are a natural bridge between terrestrial and marine environments, where life flows in the rise and fall of the tides. The tangle of trunks and roots dominated by six types of trees is home to countless animals, including some threatened with extinction, such as giant grouper spawn and the uçá crab.

Mangroves also function as “filters”, retaining chemical pollutants, plastics, bottles, and other waste brought by rivers and streams from the sea. Furthermore, they reduce coastal erosion by containing the impact of waves during storms and “surges”.

“Some of the world’s largest preserved mangrove areas is in Brazil. Over 80% of the Amazon’s mangroves are in conservation units. But legal protection is not enough, it needs to be enforced, which depends on many sectors,” highlighted Marcus Fernandes, coordinator of the Mangrove Ecology Laboratory at the Federal University of Pará (UFPA). to the Vozes Amazônicas project.

Even with a large area sheltered in conservation units, studies by the Luiz de Queiroz School of Agriculture (ESALQ), at the University of São Paulo (USP), indicate that mangroves suffer impacts from deforestation, urban and industrial growth, sewage and chemical pollution carried by rivers, shrimp farming, and uncontrolled fishing. Highways and other infrastructure projects, such as Highway PA-458, connecting the cities of Bragança and Ajuruteua in Pará, also impact them. These losses even affect populations involved with extractive activities.

“In socioeconomic terms, mangroves are a source of income for fishermen and crab collectors and are therefore responsible for sustaining commerce of some small towns. Furthermore, they are associated with the tradition and cultures of many villages, with legends and stories involving mangroves”, highlighted Danilo Romero, from the Department of Soil Sciences at ESALQ/USP. 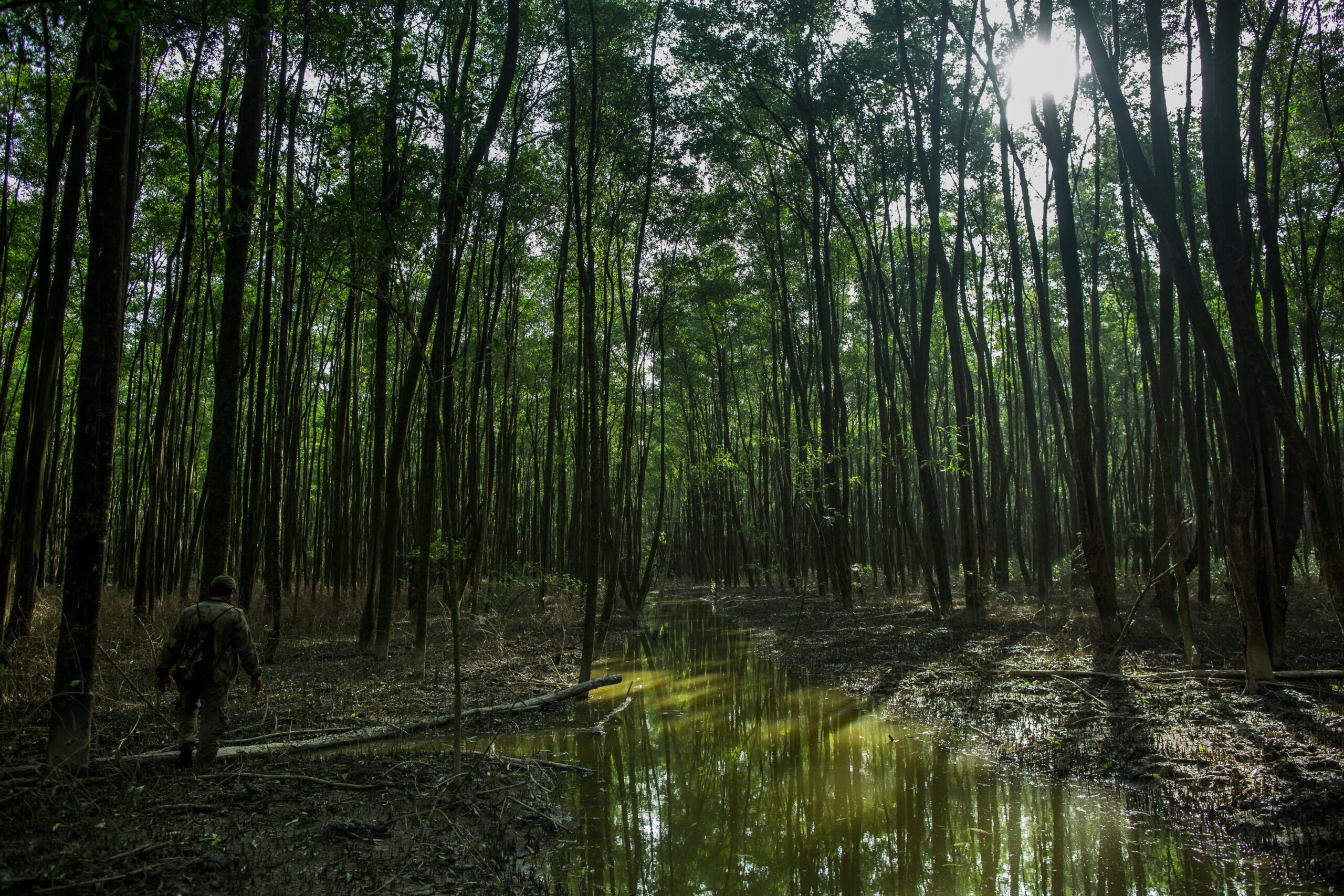 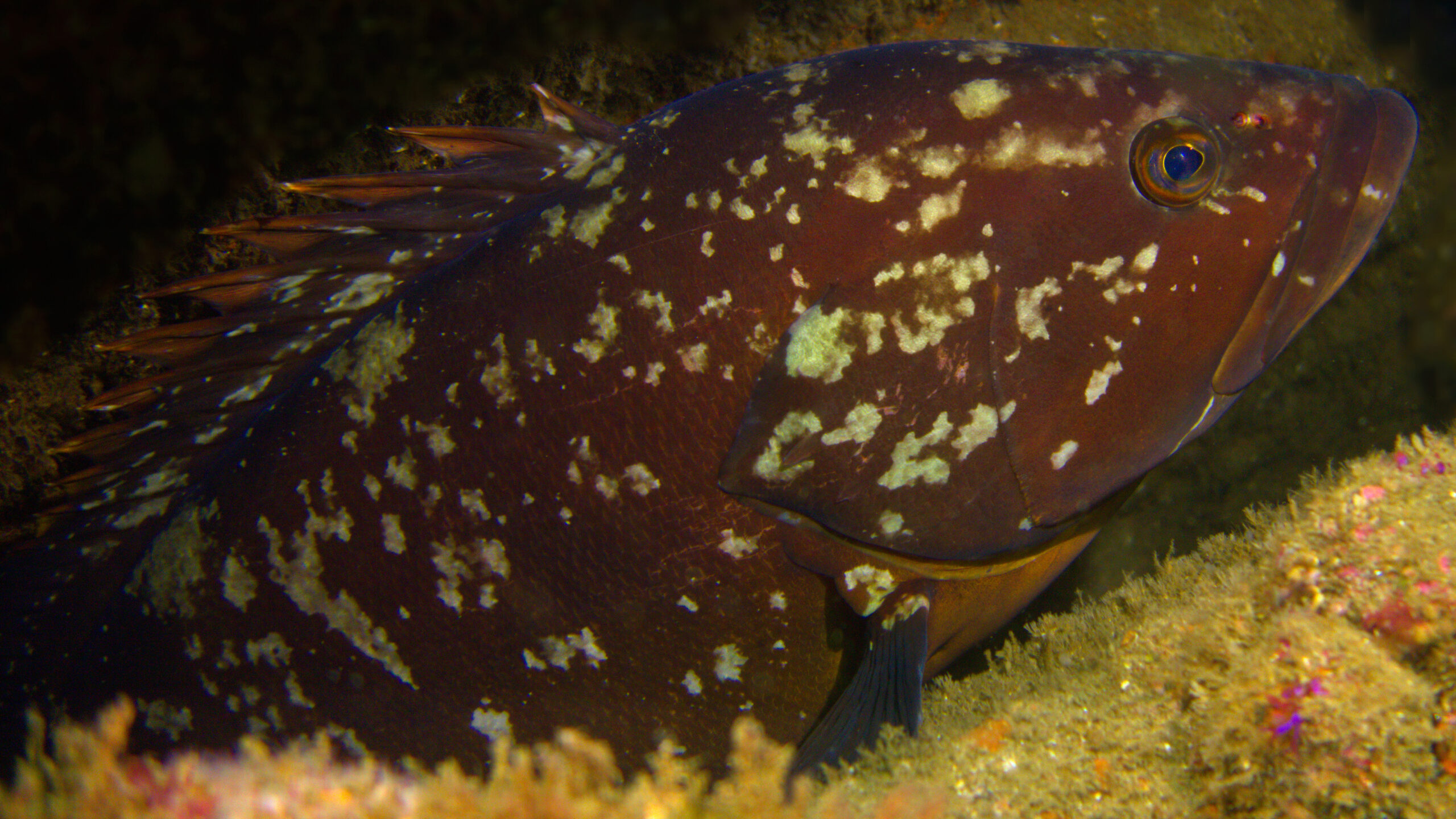 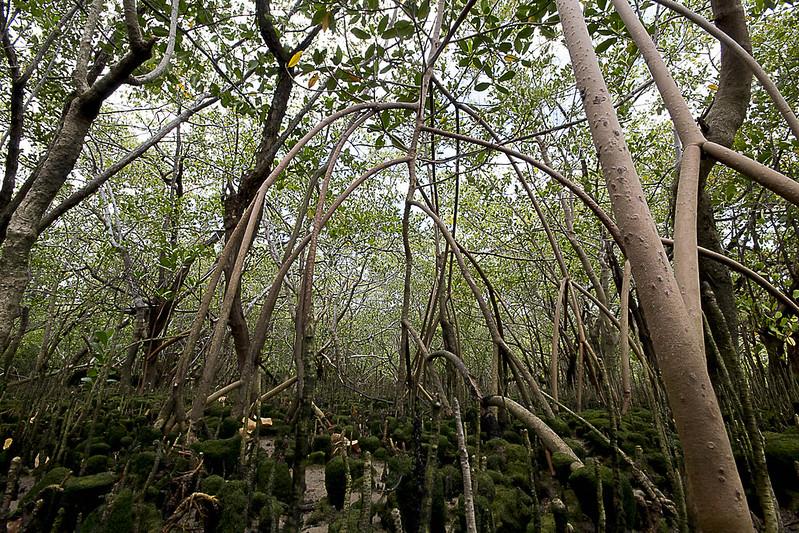 According to scientist Marcus Fernandes, the construction of “fishing corrals” is one of the activities that has already compromised the recovery of mangroves in some regions of the Amazon. This artisanal technique captures fish in labyrinths built with straw and wood from the mangroves. The demand for “seafood” has grown alongside the increase in population and economies in the coastal zone.

“The construction of corrals is not allowing the mangrove to recover. The process is transforming from artisanal to industrial scale. People already migrate between states and municipalities looking for resources that have already been depleted in their regions. We need to plan and guarantee the sustainable use of mangroves,” said Fernandes, a Biology Ph.D. at the University of York (England).

The climatic function of mangroves

A study published in the journal Biology Letters by Romero (ESALQ/USP) and other Brazilian and US researchers revealed that mangroves store twice as much carbon (CO2) per hectare as forested areas. The conclusion came after measurements in 12 mangroves and sandbanks in the Amazon. The secret lies in the soil, constantly flooded by saline or brackish water.

“When it dies or is cut down, vegetation in dry areas releases the carbon it absorbed as it grew into the atmosphere. In the mangrove, the plants that die are incorporated into the soil and there is less oxygen for their decomposition due to the constant flooding. Thus, the gas that would be released in a few years is retained for decades,” described Romero in a conversation with InfoAmazonia and PlenaMata.

Mangroves are part of the wetlands and floodplains of the Amazon, natural formations that store and emit methane (CH4), a gas that is four times as harmful to the climate as carbon. Research published on Philosophical Transactions of the Royal Society found that Amazonian trees emit methane in both floods and regional droughts.

“Methane emissions occur naturally during the decomposition of organic material. We saw that most of the methane released in the Amazon comes from flooded areas, which account for 16% of the forest,” said Viviane Figueiredo, a researcher at the Environmental Analysis Unit at the Federal University of Rio de Janeiro (UFRJ) and one of the authors of the study.

Methane emissions are associated with the presence of livestock, the use of fertilizers, the burning of vegetation, and industrial pollution. The natural release of the gas in the Amazon calls for tougher measures against deforestation and may increase Brazilian emissions, as it is not yet accounted for. InfoAmazonia has shown that forest degradation is also not included in national greenhouse gas estimates.

“This does not mean that trees harm the climate and should be cut down. In practice, they store more carbon than they emit methane,” highlighted Viviane Figueiredo, a postdoctoral fellow in Geosciences and Biotechnology at the UFRJ. “The discovery of new natural sources of greenhouse gases allows decision-makers to adjust national emission targets and actions to control deforestation and fires,” added the scientist.

Mangroves account for only 0.6% of the world’s tropical forests, but their deforestation accounts for up to 12% of greenhouse gas emissions from deforestation in these regions. Therefore, clearing or damaging mangroves is bad business in Brazil and other Amazonian countries.

In Ecuador, the largest global area of mangroves has been losing space to shrimp farming. Colombia has seen half of its mangroves disappear over the last three decades. Smaller areas in Peru receive tourists and are relatively conserved within protected areas.

“Climate change and changes in land use for agriculture, shrimp farming ponds, or infrastructure projects threaten the future of mangroves and significantly increase greenhouse gas emissions into the atmosphere,” added Marcus Fernandes, coordinator of the Mangrove Ecology Laboratory at the UFPA. 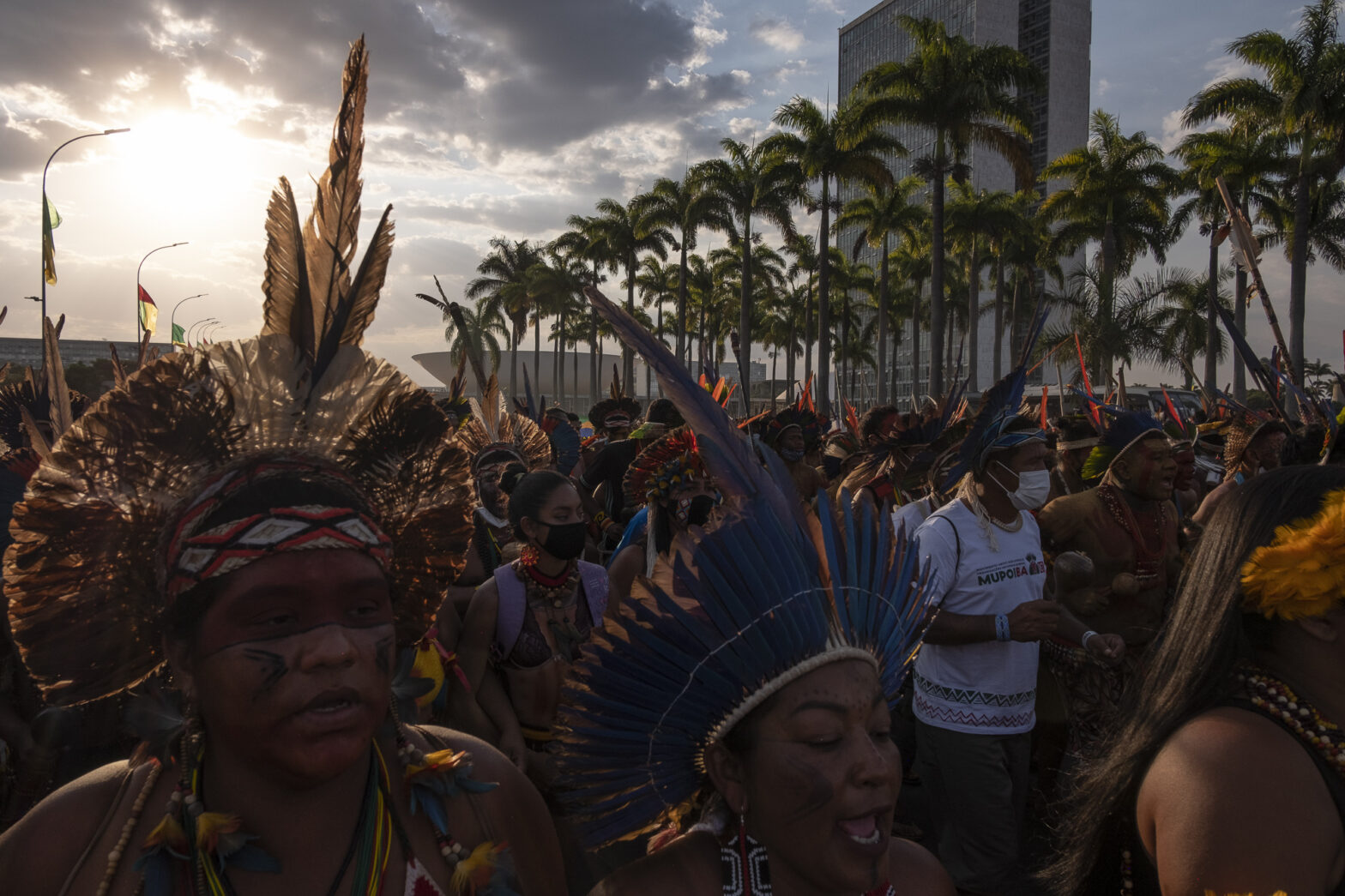 The anti-Amazon bills on the agenda for Congress