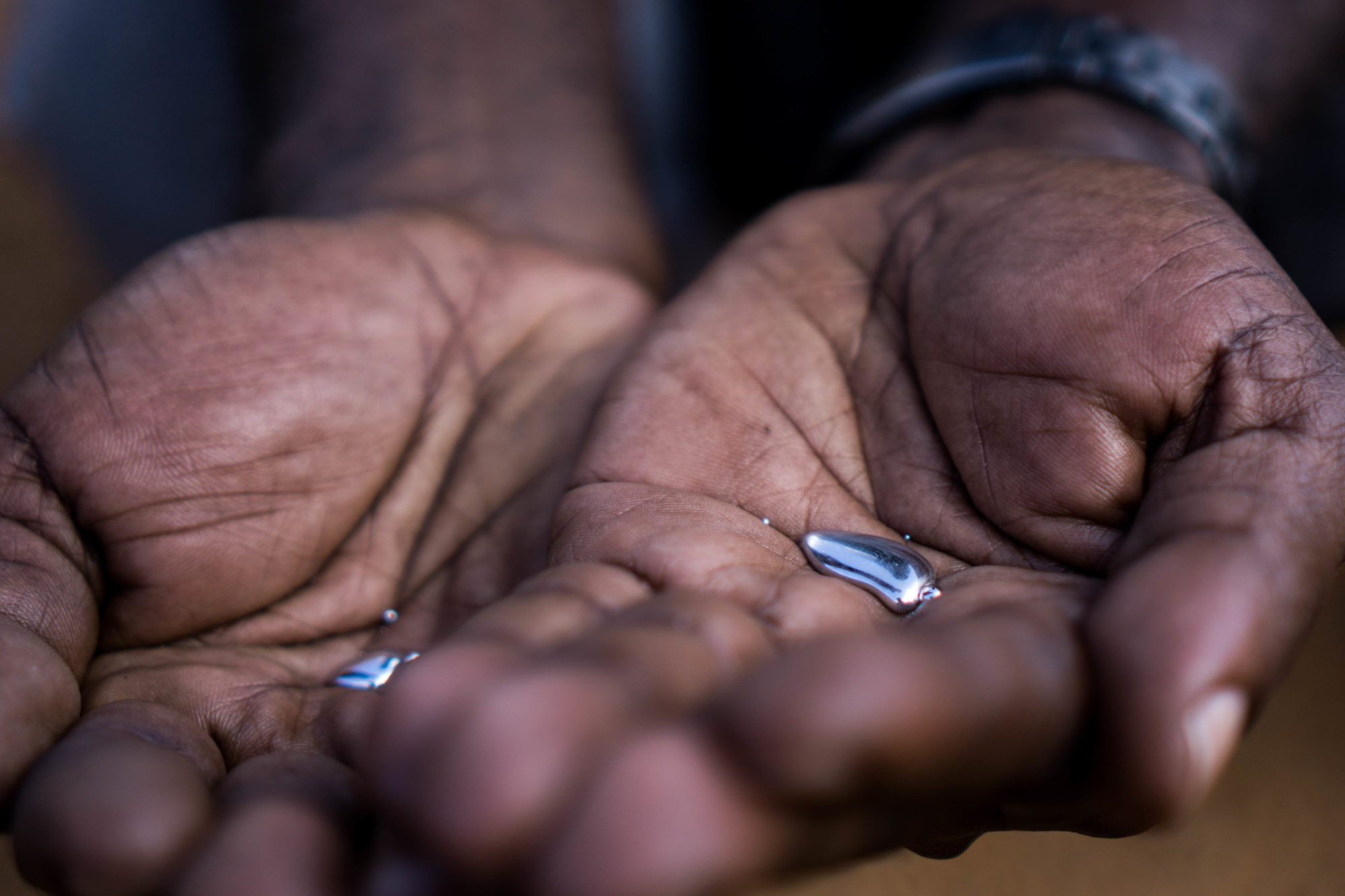 This story is part of InfoAmazonia´s project “Mercury Alert”, a year-long investigation into the impacts of the use of this toxic substance in the Amazon; with the support of International Union for Conservation of Nature (IUCN), the Rainforest Journalism Fund via the Pulitzer Center on Crisis Reporting

Text and Photographs by Bram Ebus

Last week, the IUCN National Committee of the Netherlands (IUCN NL) published a report looking into the world of the informal and formal mercury trade – a highly toxic substance that is used to bind with gold in the extraction process of the precious metal. The study was undertaken in three different continents. In the Amazon region, Bolivia, Guyana and Suriname were examined.

Mercury is one of the driving forces of artisanal and small-scale gold mining in the Amazon. For the public eye, the trade of mercury remains in the shadows of the gold trade, known for its excessive profits and the jet-set image of the precious metal. Fewer people know that mercury in itself represents a multi-million dollar business. 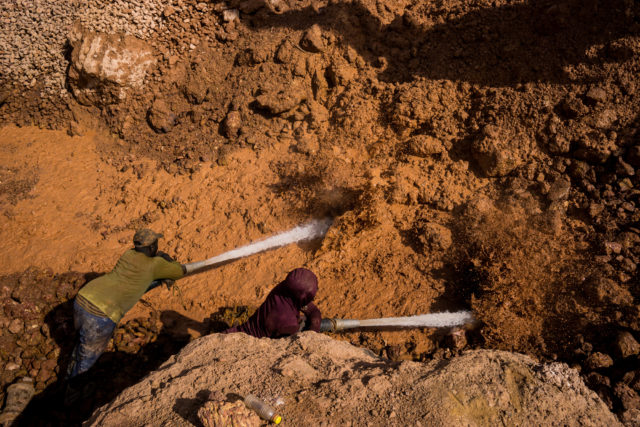 Gold mining in Suriname, a key country on the chain of mercury distribution in South America

The metal is mostly mined in Indonesia, Mexico and China, with the latter two as the biggest global suppliers. In many countries where artisanal and small-scale gold mining is dominant, up to 95 percent of the miners use the contaminating metal. Just to give an idea, one-fifth of the global gold supply and at least 10-20 million miners work in this economic activity.

Issues related to the irreparable damage done to human health and our natural environment, caused by mercury contamination, have caught the attention of lawmakers and multilateral agencies. Estimates of mercury released into the environment, from the UN Environment, add up to 1220 tonnes in 2015. In August 2017, the Minamata Convention on Mercury entered into force, which is an agreement that aims to forbid the use of mercury in artisanal and small-scale gold mining and to regulate international trade.

Phasing out mercury in gold mining is hard to envision. Prohibitions often have an adverse effect on crime. The US nationwide alcohol ban in 1920, for example, was an enormous incentive for criminal enterprises and a boost for notorious criminals such as Al Capone. In the world of mercury, things are not much different. Earlier bans and restrictions of the use of mercury have pushed the trade onto a black market and therewith increased the profits for criminal actors and criminalized subsistence miners that already found themselves in extremely vulnerable situations.

The European Union (2011) and the US (2013) banned the exportation of mercury, which caused prices to rise and shifted trade flows that became more opaque.

The new study by IUCN found that data provided by national governments and the UN trade statistics database, called COMTRADE, hardly seem representative of the market, which moves through an underground world of irregular actors.

“The informal mercury supply chains are cartel-like structures, similar to other illegal networks. They work in secrecy and are based on trust. Mercury trade is a lucrative business, especially high up in the supply chain,” says Barbara Hendus, who compiled IUCN NL’s study.

Another finding of the study is that small-scale gold miners disproportionately receive blame for their mercury usage. Small-scale gold miners often live a life of informality and struggle to make ends meet. In comparison with the gold price, mercury is fairly cheap and widely available in mining regions. To produce gold, the use of mercury significantly increases the return and incentivizes subsistence miners to work with the contaminating substance, exposing themselves to high health risks while finding themselves at the lowest shackle of the gold supply chain.

Mercury use in Bolivia on the rise

In Bolivia, about 89% of the gold comes from the artisanal and small-scale gold mining sector that depends on the use of mercury. When neighboring Peru banned mercury imports in 2015, imports in Bolivia rose at least twelve times and made Bolivia the global second largest mercury importer. Over 90% of the mercury that enters Bolivia comes from Mexico.

Bolivia proves to be an excellent case to get an insight into who is reaping the benefits of the mercury trade. There are 37 legally listed importers in the country, that mainly get their mercury through the Arica seaport in Chile (Bolivia has no access to the ocean) and then is commercialized in the capital La Paz and neighboring urban hub El Alto.

Import mercury costs about 10 to 31 USD a kilo, but prices already increase to between 166 and 217 USD when managed by intermediaries. To reach the mining areas in the interior of the country, flasks are taken with cars and public transport without any restrictions of the law enforcement authorities.

In small hubs near the mining areas, the quicksilver costs 200 to 240 USD. This means that importers can make profits ranging in between 5 to 20 times the purchase value. According to the IUCN NL study, Bolivia imported between 647 and 1,366 tonnes of mercury a year in between 2014-2018. 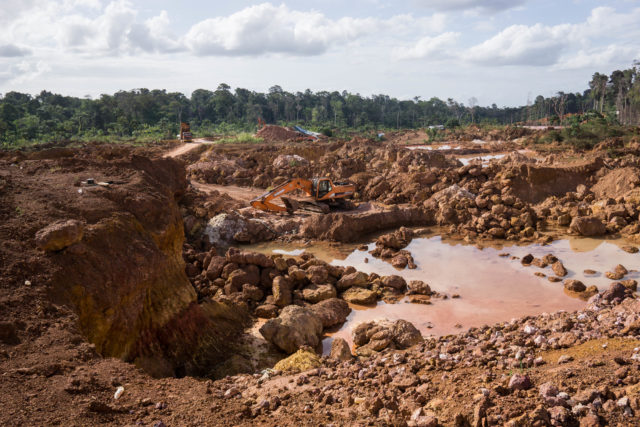 The mercury trade in neighboring countries Suriname and Guyana are very much connected. Ecosystems and communities living in these two Amazon countries bear the brunt of mercury widely being spilled into the environment. But in both countries, gold mining is the driver of the economy and many residents have no other options than to dig into the dirt in the mining fields.

Permits to legally import mercury into Suriname have not been given since 2003, meaning that all of the mercury must have entered illegally. Quite conveniently, Guyana’s legal doors have been wide open for the entrance of mercury and the country has been the region’s main mercury importer. Guyanese mercury evidently ends up in Suriname, which is just a river crossing away.

“The border is porous and largely unpatrolled and it would not be difficult for anyone to take contraband including mercury in either direction,” says Ian Sutherland, responsible for IUCN NL’s investigation in Guyana.

In Guyana and in Suriname, charter planes, cars, busses and go-fast boats distribute the mercury to all the gold mines scattered around the Amazon, with no interference of the respective police forces. “Bribery is a major problem in Guyana,” says Sutherland. “In mining areas, you often see policemen with thick gold chains and jewelry and you can guess where they get it from. Sometimes even a bottle of foreign liquor will be enough for the police to look the other way.”

Knowledge about mercury-free gold mining methods is often unknown to small-scale gold miners or requires investments that they are unable to make. Traders, investors and project owners often obligate them to work with mercury as they expect maximum returns.

Many of the miners are not completely aware of the health risks that often present themselves after years of mercury contamination, they downplay the impact and take zero or few safety measures. Meanwhile, mercury continues to flow around through underground markets and crosses porous borders while law enforcement officials turn a blind eye to the trade.

In order to start tackling the problem, according to IUCN NL, trade data should be more transparent, but it is paramount that mercury-free mining methods must be promoted while drastically improving labor conditions for artisanal and small-scale gold miners.

“Within the mercury trade, miners are not the driving force, but often forced into using mercury due to economic and market factors,” explains Hendus. “They should not be further criminalized, but instead the focus of law enforcement should be on importers and wholesalers high up in the supply chain.” Markets for mercury-free gold must be prioritized. Prohibition through the Minamata Convention is just not enough.