Almost a month since an oil spill, the new autonomous Wampis peoples’ government is asking the Peruvian government to take definitive and drastic measures.

Two back-to-back oil spills have left indigenous communities in Peru’s northern Amazon, along the Chirico and Marañón rivers, in a really bad shape.

The crude oil has traveled thousands of miles since the first spill took place on January 25, covering the river banks and contaminating the water the local communities drink, while generating a public health emergency and threatening their food security.

Many of the nearby communities have tried to clean up 2,000 barrels of oil amongst themselves, while the company responsible for the spill, PetroPeru, took too long to respond and send help.

Then, on February 3, 1,000 more barrels of oil ended up on the Cashacaño River, affecting 4,000 square feet of the Wampis peoples’ territory. Around 100 families live in this community; they had to wait almost 20 days to receive outside help. Meanwhile, the families had to eat nothing more than plantain and yucca to avoid contamination.

Now almost a month since the disaster, the territorial and autonomous Wampis government –formed just last November– is asking the Peruvian government to take definitive and drastic measures.

On February 18, the Wampis peoples presented a formal complaint with Peru’s Agency of Assessment and Environmental Control (Organismo de Evaluación y Fiscalización Ambiental or OEFA), accusing Petroperu of grave negligence for not having avoided and for failing to contain the oil spill in the Wampis community of Mayuriaga. As a preventive measure, Wampis leaders are demanding that oil drilling cease in their area. Their complaint states that a stop in their activities would be “the only effective measure that could prevent irreparable damage to the environment and to the health of the neighboring communities living along the pipeline.”

The formal complaint to the OEFA was presented through the human rights organization Legal Defense Institute (Instituto de Defensa Legal or IDL) and it demands that the state agency sanction Petroperu, that it monitor the situation closely, while creating a plan for control and remediation for the oil spill. The complaint also ask that PetroPeru be made accountable for many of the impacts of the spill, by at least providing food and water to the affected communities.

Meanwhile, the OEFA presented a resolution through which they’ve ordered Petroperu to act according to its environmental management program. The resolution makes the state oil company responsible for the “efficient and immediate maintenance of sections of the oil pipeline that haven’t yet suffered significant of severe deterioration”, as well as the “replacement of parts of the already impaired oil pipeline.”

In conclusion, OEFA documents show that the most recent oil spills were not isolated cases. In the past, the agency says it “handled similar emergencies that were caused by failures in sections of the pipeline.” Since April 2011, when OEFA started monitoring Peru’s oil infrastructure, the agency has documented 20 similar problems.

“For more than 40 years [PetroPeru] had not run maintenance nor done any repairs on its pipeline, knowing full well that [the Oleoducto Nor Peruano] needed constant maintenance every 10 to 15 years,” said Wrays Pérez Ramírez, the recently elected Pamuk or president of the Wampis government.

“We, the Wampis people, never authorized nor gave our consent to this oil pipeline’s construction. And yet despite this, we suffered the consequences,” added Wrays Pérez Ramírez. “This is exactly the type of problem that our new territorial government hopes to address.” 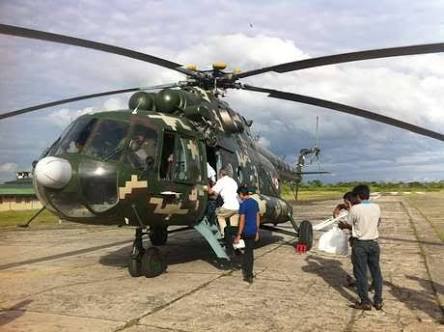