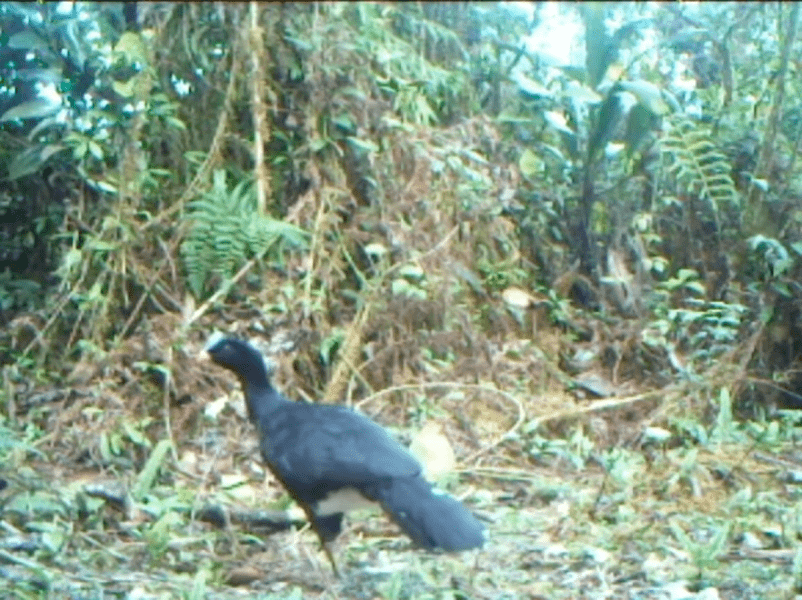 The Sira Currasow is a critically endangered bird that lives only in the high altitude tropical forests of the Cerros del Sira mountain range in central Peru.

It’s proven nearly as elusive as it is rare: Scientists first described the species in the 1970s, but wouldn’t observe the bird again for another three decades.

But now an expedition to the Cerros del Sira has captured the first ever camera trap footage of the Sira Currasow (Pauxi koepckeae) to be made publicly available.

“We were shocked by the incredible results we found,” Andrew Whitworth, a researcher from The University of Glasgow who was part of the expedition, told mongabay. “One of the coolest things is that crowdfunding supported a third of the expedition funding, along with the Royal Geographical Society Neville Shulman Challenge award.”

Whitworth and team cite previous research that found there could be as few as 250 mature adult Sira Currasows alive right now, and their population is in decline due to habitat destruction and being hunted for meat. Prior to this footage, there has only ever been one photograph of the bird available to the public.

The expedition, led by biologists from the University of Glasgow as well as the University of Exeter, used 22 camera traps to capture the footage, and the Sira Currasow wasn’t their only big find. The team also captured the first hard evidence that Andean spectacled bears live in the Sira Communal Reserve, established in 2001 to protect the unique biodiversity of the isolated Cerros del Sira range.

The Andean spectacled bear (Tremarctos ornatus) is listed as a vulnerable threatened species on the IUCN Red List, and the closest it’s previously been known to inhabit is some 100 kilometers (62 miles) away. The biologists say that represents an increase in the bear’s range of up to 540,000 hectares (1.33 million acres), enough habitat for around 325 adults.

The hidden cameras also captured 30 species of mammals including jaguars, giant anteaters, Brazilian tapirs and pumas, plus 145 species of birds, 41 species of amphibians, 10 species of lizards and 7 species of snakes. Two of the lizards and three of the frogs are believed to be new species unknown to science.

“The results of our expedition and these incredible videos highlight the importance of the Sira Communal Reserve in maintaining biodiversity in the region,” Dr. Chris Beirne of the University of Exeter said in a statement.