In addition to the Proposed Amendment to the Constitution 215, four other subjects can return to be processed this year and, if approved, bring negative impacts to the Amazon. 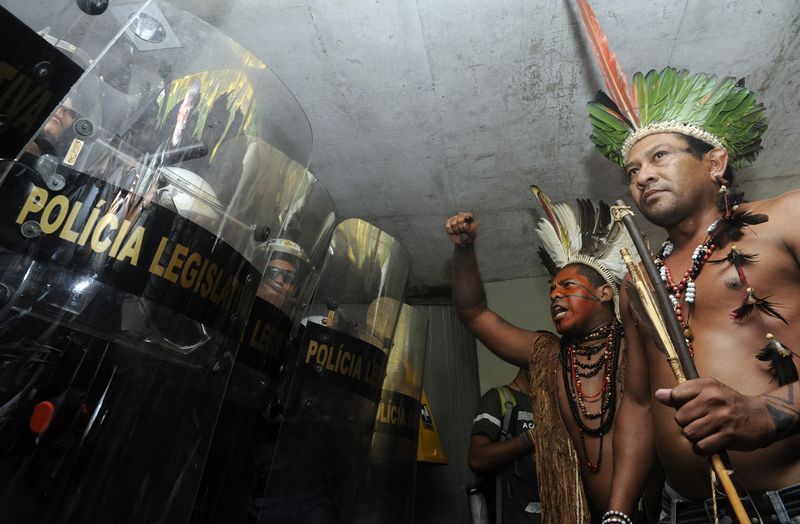 The bills listed below were mentioned by experts from different environmental NGOs interviewed by Infoamazonia as five matters that could brought up again in both houses of Congress in Brazil. If approved, they might have a negative impact on the Amazon.

The PEC (Proposal of Constitutional Amendment) 215 bill, presented in 2000 by former federal deputy Almir Sá, wants to alter the Brazilian Federal Constitution, giving the National Congress the authority to approve the demarcation of indigenous lands. Currently, the final word rests with the Ministry of Justice after a long process that includes anthropological studies lead by the National Indigenous Foundation (Funai) and deadlines for objections by any interested party in the ruling.

If approved, the bill will also require the creation of another law defining the criteria and procedure of all indigenous land demarcation. Experts believe that revisions of the bill’s text might also transfer to Congress the authority to recognize and demarcate quilombo lands (hinterland settlements founded by African slaves during colonial times) and environmental conservation units, the system through which Brazil classifies protected areas.

Take a look at the map below showing indigenous lands and the Amazon’s protected areas to see how much deforestation has taken place over the last decades.

In 2014, discussions on the PEC 215 in the Chamber of Deputies were brought to a halt by numerous protests from social movements and the invasion of the Congress by indigenous leaders.

“It’s an extremely worrying bill,” says Aldem Bourscheit, public policy expert for WWF Brasil. “The arguments [in favor of PEC 215] are ridiculous, akin to ‘Brazil already has too many indigenous lands.’” He says that in practice the bill’s passage would make it more difficult to demarcate those territories.

For Márcio Astrini, campaign coordinator of Greenpeace Brazil, indigenous lands are the “the most efficient way to fight logging.”

Filed in 2014, the PEC215 could be discussed by a special commission in 2015. For that to happen, discussion on the bill needs to be reopened by one the 26 deputies who signed in favor of the proposal in 2000 and were also reelected in 2014. They have until July 31 to do so. When it was first written by Almir Sá, the bill had the support of 232 deputies (see the list here). Because it’s a proposal that will change the constitution, at least 171 signatures are necessary (a third of the Chamber of Deputies) for discussion to be reopened.

For Adriana Ramos, coordinator for the Amazon at the Socio-Environmental Institute, another bill that could come up again in 2015 is the PL (Project of Law) 7.735 of 2014. This bill intends to take the place of the Provisional Measure 2.186-16/2001, which currently regulates the commercial use of genetic resources, such as plants, animals and microbes.

Traditional communities, like indigenous and quilombola communities, have first-hand knowledge of how to use these resources, which interests the pharmaceutical, food, cosmetic and other industries. Home to one of every five species on the planet, Brazil has one the vastest biodiversities in the world, with many of its traditional communities knowing how to make use of it.

The bill, if approved, would establish that small companies don’t need to share their profits anymore with the local communities. “But big corporations often use those small companies to make use of genetic resources,” Adriana says. The Socio-Environmental Institute also claims that the communities have not been consulted on the bill’s drafting, which contradicts the 169 Convention of the International Labour Organization, to which Brazil is a signatory. “The bill simplifies the legislation concerning the use of biological diversity. Currently, our government needs to oversee the whole procedure, so the executive power drafted this law to ease its own burden.”

Update: On February 9, the Chamber of Deputies passed the bill. It now goes to the Senate to be examined under a special urgency scheme — whereby the House has up to 45 days to vote on it. The Socio-Environmental Institute’s website reports that the bill’s approved text states that traditional communities will only have right to compensation if the traditional knowledge is “the main element of aggregated value” of the developed product, and if this product is included in a list that will be drafted by a couple of ministries. Products based on the access of traditional knowledge that were developed before June 2000 are also exempt from sharing profits.

The new Mining Code, currently in discussion in the Chamber of Deputies, wants to take the place of Law Decree 227 of 1967, which regulates the activity. The new billdetermines the areas that the government will open up to bidding, which should increase state revenue.

The proposal faces a lot of pressure from companies with activities in the sector, because, as reveled by Agência Pública in December 2013, it influences fundraising for the election campaigns of politicians involved with the special commission currently analyzing the draft.

The bill doesn’t advance mining regulations in environmental terms, but the whole discussion worries Adriana Ramos from the Socio-Environmental Institute. “It seems that attempts will be made to approve proposals for mining in indigenous lands separately,” she said. Aldem Bourscheit, from WWF Brazil, believes the country does need a new legislation on mining. “But, unfortunately, up until this moment, the current proposed laws don’t take the protection approach that we are seeking,” he said.

Drafted by deputy Weliton Prado, who was reelected in 2014, the bill is being processed on a “priority basis”, which means it should enter the voting agenda right after any urgent bills. He has until July 31 to request that discussion be reopened on the bill.

4. Sugar cane in the Amazon

Drafted by senator Flexa Ribeiro, the Senate Bill (Projeto de Lei do Senado – PLS) 626 of 2011 wants to legalize the planting of sugar cane in damaged areas in the Amazon.

Currently, planting sugar cane in the Amazon is discouraged because of Decree No. 6.961, published by former President Lula in 2009, which prohibits the concession of rural credit (financial lending programs or lines of credit that are focused on impacting a rural population) to that kind of plantation inside the biome.

See the advance of deforestation in the Amazon

For Marcio Astrini, the problem is that the cultivation could increase the “pressure for deforestation”. “The sugar cane will occupy the large areas that today are used for livestock, rice, cotton and soy, and will push those into the forest,” he said. The Greenpeace environmentalist added that there is a “lack of governance” in the region’s zoning, which would undermine the situation even more and also increase the forest’s destruction.

The bill was approved in May 2013 on a “terminative basis” (which means it only needs the approval of the responsible commissions and doesn’t go to plenary voting) by the Commission of Environment, Consumer Advocacy, Surveillance and Control. But senator Cristovam Buarque included an amendment to the voting and asked for the inclusion of two other committees in the discussion for it to be approved. The bill is currently in the hands of the Committee of Economical Affairs, where it met resistance from its rapporteur Rodrigo Rollemberg. Another three committees still need to analyze the bill for it to be approved.

Because the eight-year term of Flexa Ribeiro ends in 2019, the bill hasn’t been filed and is currently following the regular course.

For Aldem Bourscheit from WWF, of all the proposals that could make a comeback this year, one of the most worrying is PL 3.682, de 2012, which would allow mining activities to be carried out in up to 10% of Brazil’s full protection conservation units. Its author is deputy Vinícius Gurgel, who was reelected in 2014.

Currently mining activities are forbidden in fully protected conservation units, but may be allowed in sustainable use units. In defense of the bill, Gurgel argues that a great number of full protection units, especially in the Amazon, were created in areas rich in mineral deposits, and exploiting them is necessary for economic growth.

In return, the bill would require the mining company that exploits those areas to donate land “to the competent environmental agency” that is “double the size of the one granted with the same characteristics.”

“The impact would never be limited to those 10%. Mining activities always cause a lot of impact,” says Bourscheit. “There are conservation areas that could meet those mining demands. Brazil doesn’t need to damage its protected areas to foster those activities.”

Take a look at the map below to see where there is mining in the Amazon, combined with data on protected areas and indigenous lands

The bill, which is being processed on a “conclusive basis”, is in the Mining and Energy Commission, where it still hasn’t been put to a vote, but already has the favorable opinion of its rapporteur, deputy Bernardo Santanda de Vasconcellos. The deputy proposed a substitute to Gurgel’s bill that would move all delimitation of full protection conservation units to the National Congress and wouldn’t establish limits on mining companies in those areas, or require them to compensate in some way any environmental harm they cause. The bill still needs to go through two other commissions to be approved.

Because he was reelected, Gurgel has until July 31 to request that discussion be reopened on the bill. 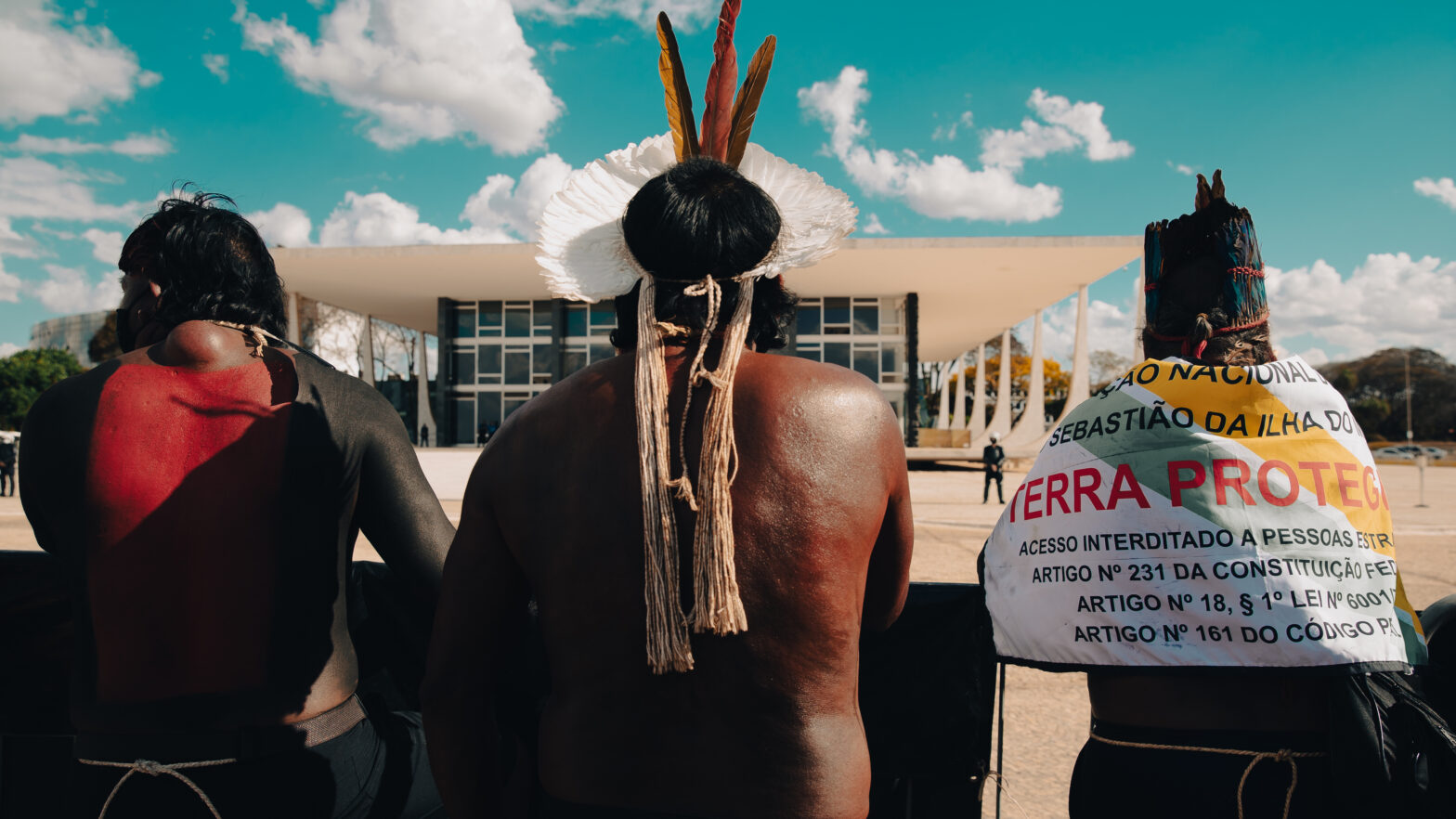