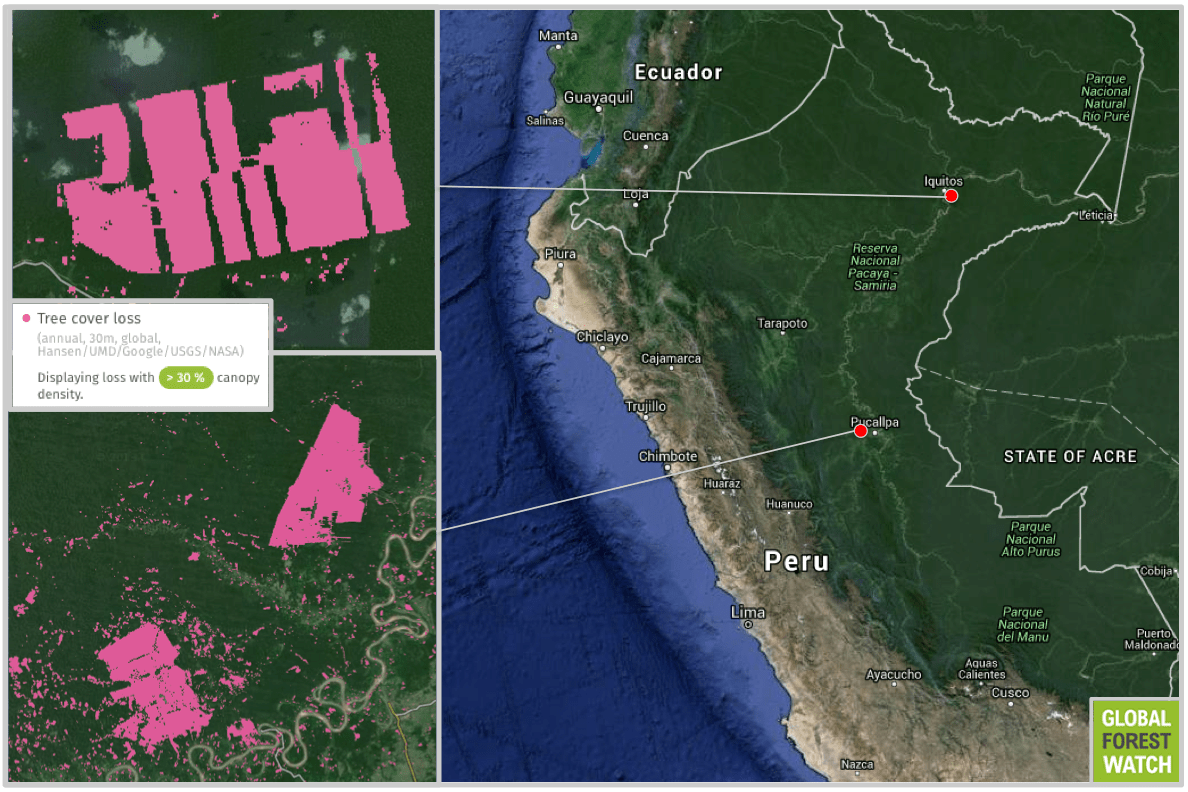 Yesterday, Peru’s forest authority issued a public statement confirming illegal actions on the part of United Cacao and called on the London Stock Exchange to hold the company accountable for its alleged violations. The statement is the latest in a series of escalating exchanges between United Cacao and its critics.United Cacao is a Cayman Islands-based, UK-listed agroindustry company with roots in Southeast Asia and holdings in Peru. Managed by subsidiary companies, its Peruvian palm oil and cacao plantations have attracted significant criticism from conservation and human rights organizations, which say they have displaced indigenous territory and primary forest.The company is listed on the Alternative Investment Market (AIM), a subset of the London Stock Exchange (LSE). On May 4, a letter issued by more than 60 Peruvian and international organizations was sent to the LSE urging that it remove United Cacao from trading on the AIM, citing violations of AIM legality regulations.“The Peruvian government initiated legal action against the United Cacao’s Peruvian subsidiary, Cacao del Peru Norte, as early as 2013, prior to the company’s initial public offering in December 2014,” the letter reads. “United Cacao’s Admission Document misrepresented the extent to which legal rulings in Peru favored the company at that time, as did subsequent statements to investors, in violation of AIM rules.”

On May 5, United Cacao issued a response statement, refuting allegations that its plantation operations in Peru are illegal.

“The Company operates in full compliance with all applicable Peruvian and environmental laws relating to planning, land use, development, operation and plantation standards,” the statement reads. “It operates on freehold land zoned for agricultural purposes by the relevant government authorities of Loreto, Peru.”

In its statement published on the LSE website, United Cacao asserts its documentation that assesses a project’s environmental and community impacts – called a PAMA – had been approved in 2013 by “the relevant authorities,” and that the company is expecting final approval later this year.

But one subset of those “relevant authorities” has come out against the company. On May 24, the Peruvian government’s forest authority (SERFOR) released a statement condemning United Cacao. The statement asserts that it did not have the required environmental approval and has indeed illegally cleared large areas of rainforest to develop its plantations, as verified by Peru’s Ministry of Agriculture (DGAAA).

A translated version of SERFOR’s statement outlines government actions to halt the operations of United Cacao’s subsidiaries in Peru. This includes a 2014 stop work order on a massive cacao plantation the size of more than 3,000 soccer fields carved out of what researchers say was primary rainforest in the country’s northeast. The order came after an evaluation by the DGAAA found the plantation’s development posed a high risk of serious harm to the environment. SERFOR asserts the plantation did not follow legally required procedure and lacked DGAAA environmental certification.

However, satellite imagery and interviews with local community members indicate forest clearing continued on the cacao plantation despite the injunction.

Moreover, SERFOR asserts that the PAMA United Cacao had been using to justify the legality of its operations was not approved by the DGAAA and is not in accordance with proper procedure.

SERFOR’s statement ends by urging the London Stock Exchange to support the position of the Peruvian government by ensuring their listed companies meet trading legality requirements.

The move was lauded by the Environmental Investigation Agency (EIA), a NGO that has been tracking the issues surrounding United Cacao’s plantations in Peru.

“The Peruvian government has made it clear that the London Stock Exchange and other sources of international capital have a role to play in ending abuses and deforestation in Peru.”