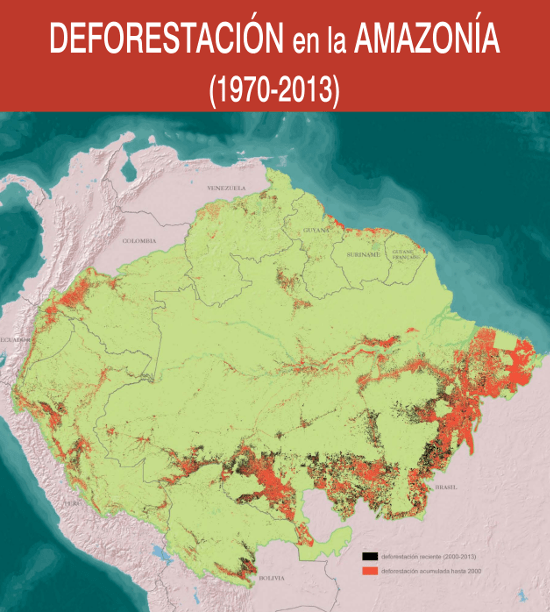 The Amazonian Network of Georeferenced Socio-Environmental Information (RAISG) reveals in a recent publication that the loss of original forest cover of the Amazon rainforest decelerated between 2000 and 2013 relative to the 1970-2000 period.

Despite this deceleration, figures remain high within the entire region for the three periods analyzed (200-2005-2010-2013). The study estimates that 222,248 km 2 were deforested in the region between 2000 y 2013, an expanse equivalent to the territory of the United Kingdom.

The deceleration of deforestation in the thirteen years elapsed between 2000 and 2013 is clearly correlated in Brazil, Bolivia and Ecuador, while Colombia, Peru, Suriname, French Guiana and Guiana either experienced surges in intervening periods or showed evidence of stabilization. The only country that displays the opposite tendency is Venezuela, with evidence of acceleration of forest loss.

Deforestation in the Amazon by country (km 2 )

Moreover, the publication warns about strong pressures to the headwaters of large hydrographic basins –located in Andean countries- as a consequence of land-use changes and water contamination led by economic activities in the area. RAISG intends to further study this situation, which poses a significant threat to forests, to the water that sources rivers and maintains their fauna, and to the human population that rely on them.

Data was obtained by the RAISG network partners through satellite image analysis in combination with SIG geographical analysis. The use of a standard methodology allowed analysis at a regional level, without excluding national differences.