The latest PRODES data, from 2013, is already updated on InfoAmazonia

As part of the Deforestation of the Legal Amazon Monitoring Project (PRODES), Brazil’s National Institute of Spacial Research (INPE) has released its updated figure of the deforestation rate in the Amazon, revealing ties between environmental policy and increased pressure on the rainforest.

The PRODES project previously published an estimated deforestation rate of 5,843 km2/year for the period between August 2012 and July 2013, but this month the organization reported the true figure, which was calculated by analyzing 216 satellite images from the American satellite Landsat 8. To identify deforestation, the researchers looked for areas larger than 6.25 hectares that had been subject to the ‘complete removal of forest cover’.

INPE’s report brings both good and bad news. The true value is 1% higher than the estimate, bringing the total rate of deforestation up to 5,891 km2 per year. This is an area larger than that of 500,000 soccer fields, a 29% increase compared to 2012.

While we are still losing pristine forest at an alarming rate, it could be worse. The good news is that the rate is the second lowest that it has been since PRODES began measuring it in 1988. The lowest was the year before, for 2012. Since 2004, the deforestation rate has dropped by 79%. 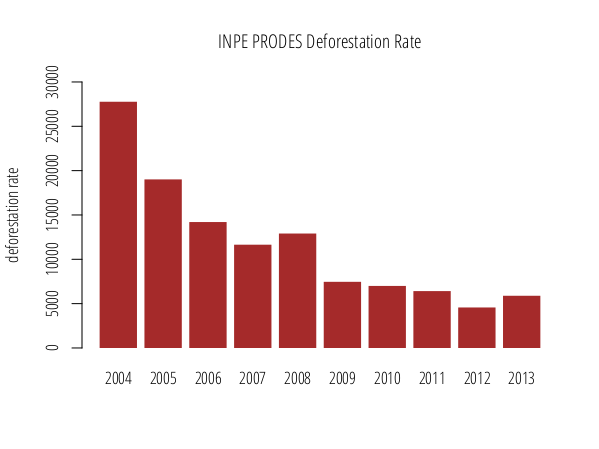 In 2004, Brazil experienced the opposite – the second highest rate ever measured as part of PRODES. The drop from 27,772 km2/year in 2004 to 4,571 km2/year in 2012 has been attributed to Brazil’s adoption of the Action Plan for Prevention and Control of Deforestation in the Legal Amazon (PPCDAm), which has included the creation of protected lands, monitoring efforts, and federal intervention against organized crime.

However, in 2012 Brazil‘s House of Representatives passed a revision to the Forest Code, with the aim of opening up rainforest lands to large-scale agriculture and decreasing the percentage of land that landowners in the Amazon are required to maintain as legal reserves.

President Dilma Rousseff vetoed only portions of the new Forest Code, setting a worrisome precedent for environmental policy in Brazil. Meanwhile the Amazon is feeling the impact of new large scale infrastructure projects like the Belo Monte dam.

This year’s increased rate could be the start of a new upward trend in deforestation if previously effective policies are weakened.

Brazil is at a crossroads, but the world hopes Brazil takes back its role as a leader in environmental protection policies, and that INPE will find a historically low deforestation rate in 2014.