The executive secretary of the BR-319 Observatory, Fernanda Meirelles, tells about how the renovation plans for a stretch of almost 500 km advanced, trampling indigenous rights and ignoring incomplete environmental studies. This highway may aggravate deforestation in southern Amazonas, a region which already breaks records month after month.

Built in the 1970s and abandoned in the following decade, the BR-319 highway is at the center of new controversies involving large constructions works in the Amazon. Its almost 900 kilometers connect the state capitals of Porto Velho (RO) and Manaus (AM). Licensing to recover the pavement in some of its stretches was accelerated by the Jair Bolsonaro administration.

In-person and online public hearings regarding the BR-319 were held by government agencies during the pandemic without the participation of indigenous and traditional populations which may be affected by the project, says Fernanda Meirelles, executive secretary of the BR-319 Observatory, a collective of civil society entities that has been trying to reduce the social and environmental impacts of the recovery and maintenance of the highway since 2017. One of them took place at the end of September when Inpa researcher and Nobel Peace Prize winner Philip Fearnside was verbally attacked by a member of the Conservative Movement of Amazonas. Meirelles, who has a Master’s degree in Ecology, is also the Public Policy Coordinator at Idesam, an NGO that works on conservation and sustainable development in the Amazon.
Below, we have main excerpts from this interview about the historical and political intricacies of the BR-319.

InfoAmazonia – How and when was the highway planned and built? Was its state of decay the trigger for the various construction works being licensed now?

Fernanda Meirelles – The BR-319 was built in the 1970s and inaugurated in 1976. It was completely paved. At the time, environmental licensing was not required by law. By the late 1980s, the highway had been abandoned and became impassable. The pavement on the central stretch is almost completely gone. Other stretches flooded, requiring constant maintenance of numerous bridges, manholes, and other structures. So much damage brought its recovery back to the fore in 2005 when Ibama inspected the entire highway and debates began on the proper environmental impact studies for its paving and maintenance. Near the capitals Manaus and Porto Velho, the pavement has already been recovered. The discussion today is focused on the recovery of the so-called “C” and “do Meio” stretches, totaling almost 500 kilometers in the regions of the Tupana River and the bridge over the Jordão River to the junction with the BR-230 (the Transamazônica highway).

Parallel to the licensing of the paving works, there is an ongoing process for the maintenance of the highway’s use throughout the year, during both the dry and wet seasons. Its licensing formally began in 2008, and Ibama has been asking for corrections and further information since then. The current administration has accelerated the licensing of the BR-319, as well as trying to unlock other works, such as BR-317, stretching from the Peruvian border to Rio Branco (AC), and the Ferrogrão, a railway between Cuiabá (MT) and Itaituba (PA).

Are these renovations really necessary? To what end? Does it have the support of the Amazonian population?

There’s a lot of political appeal behind the renovation of the BR-319, so it was kept as a priority by several governments, including the current one. It was built during the military dictatorship, under its predominant motto of integrating the Amazon with the country’s other regions so as not to yield it to non-Brazilian interests. Currently, I don’t think it would be a great route to transport goods, which already flow through cabotage and other, cheaper alternatives.

The motivation is mostly political and it has a very large popular appeal, as this highway would guarantee the access of populations to other parts of the country, ensuring freedom of movement, a very important point in the region. The view that the Northern Region is neglected by the rest of the country comes from a long time ago and gains momentum during election campaigns. Of course, its reconstruction can also be connected to the consolidation of economic interests such as the flow of exports to the Pacific Ocean through highways connecting Peru and Brazil.

Do we know how much it will cost to renovate the BR-319? Who is going to pay the bill?

In the 1970s, its construction was part of a large government package of infrastructure works in the Amazon. Today, there is also no transparency about the costs and sources of funds for the paving and maintenance of the BR-319, but the works are included in the PPI (Partnership and Incentives Program) as a priority. There are also several problems in bidding, investments, and the quality of works already carried out, which are being identified by the Federal Court of Accounts and other entities.

Why do civil entities criticize the public hearings on the highway’s renovation promoted by the government in late September and early October?

We took a stand against the four public hearings because prior, free and informed consultations with indigenous and traditional populations were not carried out, as required by ILO Convention 169. These populations were not heard. The public hearings dealt with the licensing of stretches to be renovated, but the consultations must look at what will happen along the entire highway. Furthermore, face-to-face meetings are a major risk during the pandemic, especially in a state (Amazonas) that was severely affected by Covid-19 and which still has a low vaccination rate.

Another problem is that the hearings were also broadcast over the internet, while the most affected populations in the area of influence of the BR-319 are not close to the municipal seat, and so did not have access to the event – they could not travel due to COVID, nor do they have internet access. Those who live along the highway did not participate in the meetings. The hearings took place under protests, overturning lawsuits, and with low attendance. They were carried out even before the conclusion of the environmental impact studies and the indigenous licensing studies. All of this is completely ignored by the DNIT (National Transportations Department) and Ibama. For the government, these issues were dealt with during the hearings. All of this makes licensing very fragile and subject to new judicialization processes.

What is the region the BR-319 passes through like? What social and environmental damages are occurring and are projected with the renovation works?

We monitor the highway’s area of influence, which covers 13 municipalities and capitals, 69 indigenous lands, and 41 conservation units. It is a region with a certain amount of territorial organization, but where records for burning, deforestation, and forest degradation are set every month. These are advancing mainly in the south of the state of Amazonas, a trend influenced by the BR-230. We verified that illegal logging roads are coming from the BR-319 into protected areas. All of this amplifies impacts such as hunting, land conflicts, and land speculation, which grow with government announcements about the relaxation of environmental rules.

There is also a worsening of diseases and prostitution, including among indigenous populations. Close to Porto Velho (RO), the Karipuna Indigenous Land is one of the most affected in the entire Amazon by invasions, deforestation, land grabbing, and other aggressions. In May, the Karipuna people sued the Federal Government and Funai (Indigenous Agency) asking for protection for their lands and lives.

The scenario also hinders initiatives and policies for sustainable development in the BR-319 region. This destruction does not bring any improvement to the municipalities, which end up listed as the largest deforesters and have restricted credits.

What can we expect for the BR-319 region in the coming months, considering that we have a highly-anticipated election year ahead of us that is sure to bring political clashes?

The Jair Bolsonaro government has goals to finish the licensing for paving the BR-319 this year, even if the works do not start immediately. This is all anchored in campaign strategies to attract voters for government allies in the north of the country. But we cannot rule out new turnarounds, including new judicial actions regarding the licensing. However, for the time being, the judicial decisions have been favorable to the renovation works. 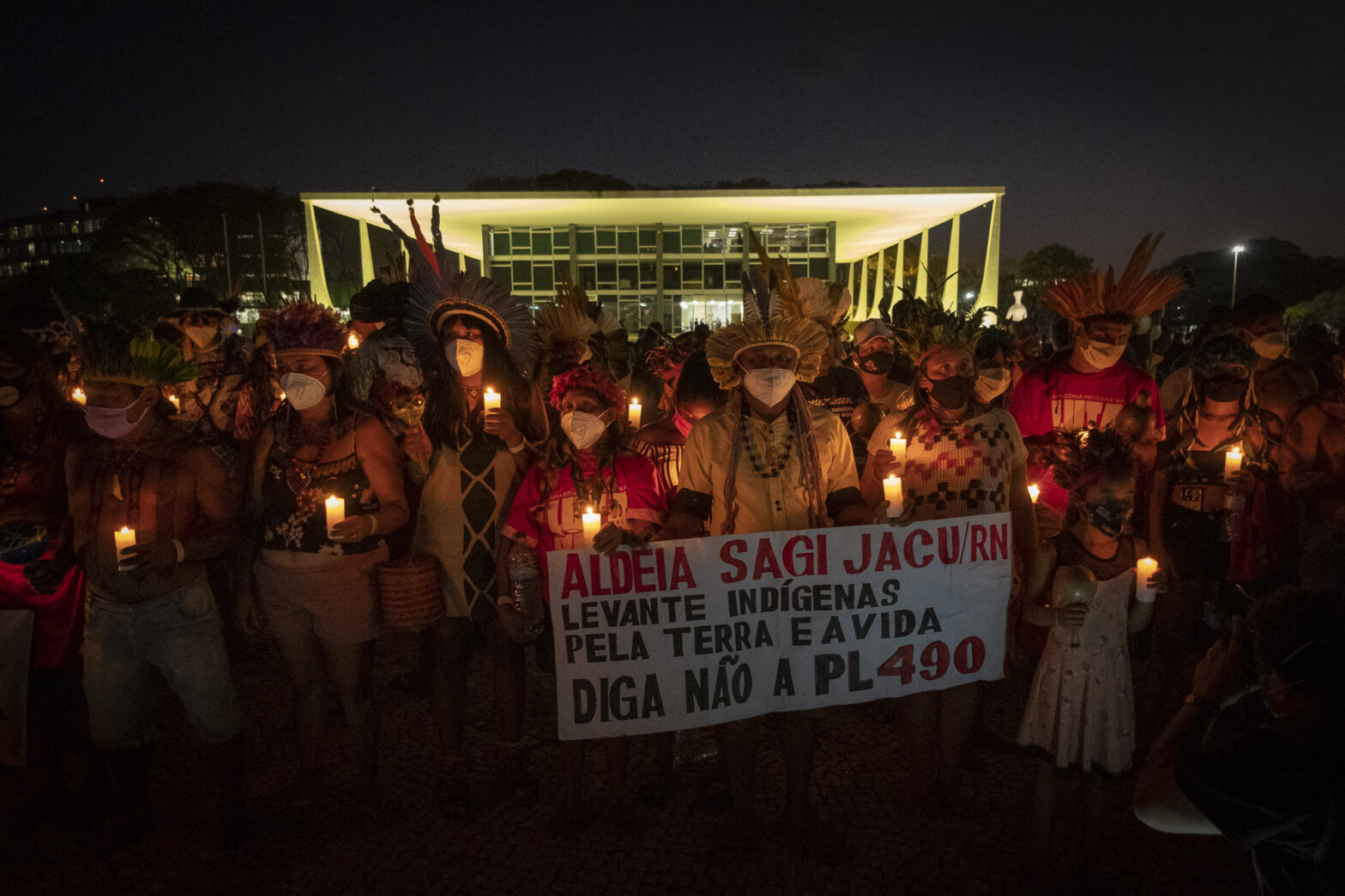 These 4 bills could worsen land tenure chaos in the Amazon

Contrary to the issues debated at COP26, both houses of Congress are discussing bills that increase deforestation, give amnesty to public land grabbers and weaken the protection of indigenous peoples' rights. 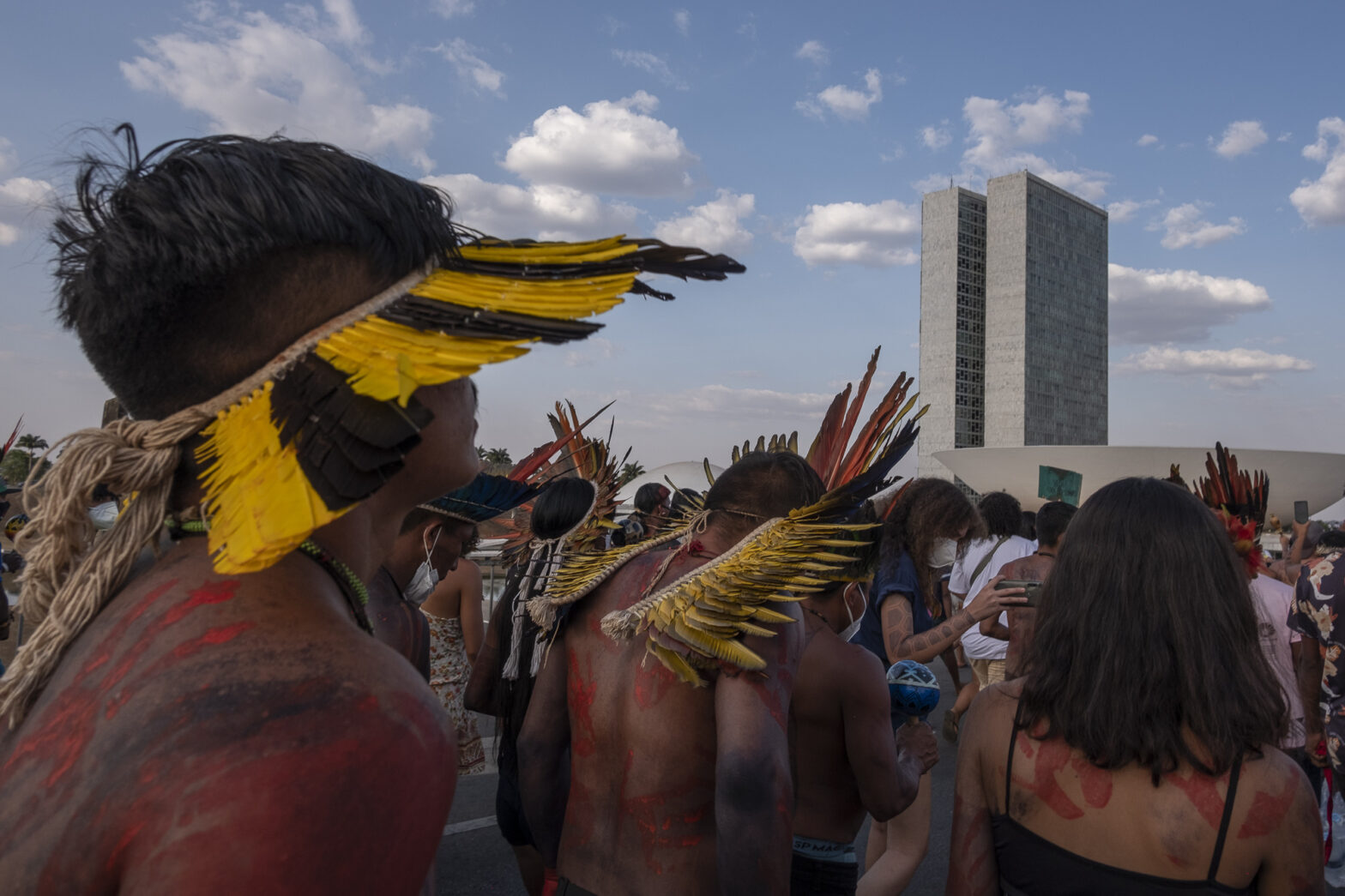 Ending the "Time Limit" Thesis Will Protect the Climate

Lawyer Luiz Eloy Terena, a Representative of the Coalition of Indigenous Peoples of Brazil (Apib) at the Brazilian Supreme Court hearing in question, comments on the importance of demarcating indigenous lands for the protection of the country's natural resources. MapBiomas data shows that only 1.6% of Brazil's deforestation occurred in Indigenous Lands over 36 years.