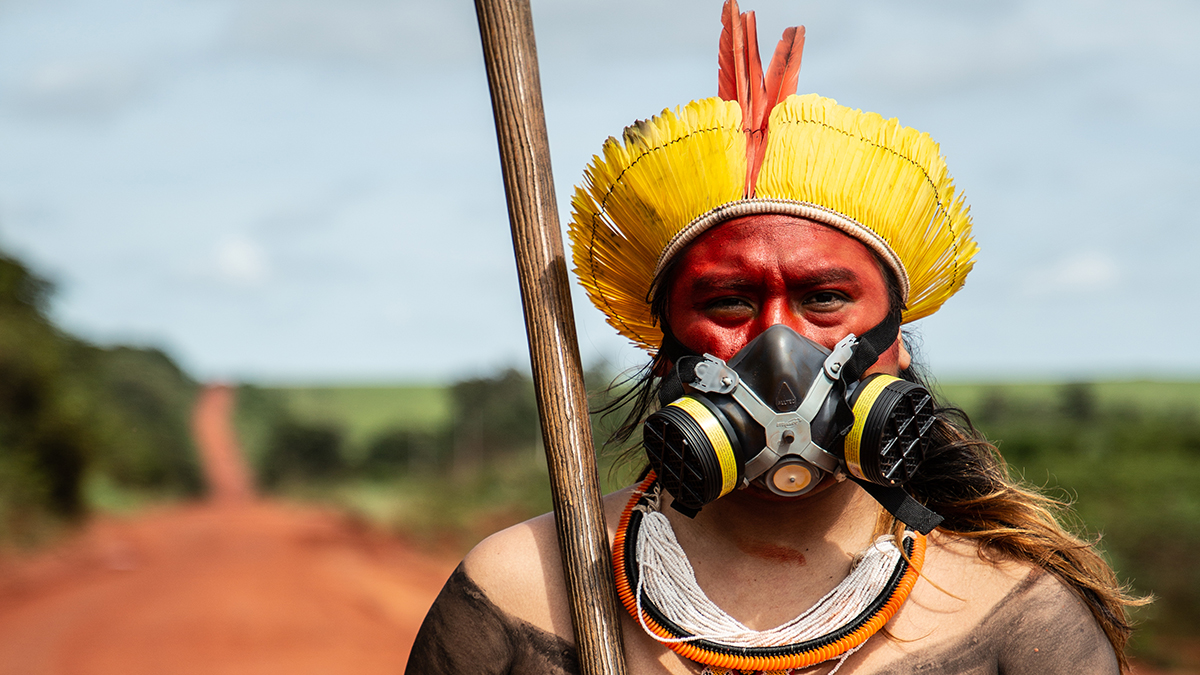 Analysis shows that the distance between villages inland in the Amazon and the nearest ICU bed can exceed 1000 km. There are no pulmonary ventilators in most Amazonian municipalities. Opening photo: young Kayapó Matsi Waura Txucarramãe in the Piaraçu village/Brazilian State of Mato Grosso (andreoliveira.cebola)

To avoid being the protagonists of yet another historical cataclysm, as has happened in past epidemics, the indigenous people of the Amazon are waging war to ensure that social isolation in the villages is as efficient as possible. This is not always easy, because the flow of people between cities and the forest remains high and, what is worse, invasions of their lands by miners, loggers and land grabbers are frequent. Protection against the spread of the new coronavirus is essential because if serious cases start to surface in the villages, access to health care will always be far away, as revealed by an unprecedented analysis performed by InfoAmazonia.

Hover your mouse over the points on the map indicating health care facilities to see the number of ICU beds.

This information was produced crossing data from the National Registry of Health Facilities (Cadastro Nacional de Estabelecimentos de Saúde) of the Brazilian Health Ministry with the location of Amazonian villages available in the Indigenous Village Registry System (Sistema de Cadastro de Aldeias – SisAldeia) of the FUNAI (Fundação Nacional do Índio – National Foundation for Indigenous Peoples). This database is not an official data collection, but a collaborative mapping, and it does not include all Amazonian villages.

“People in remote communities are in a challenging situation. Some will take eight to ten days to get here to the seat [of the municipality] of São Gabriel da Cachoeira”, says Marivelton Barroso, of the Baré people, president of the local federation of indigenous associations, FOIRN (Federação das Organizações do Rio Negro – Federation of Indigenous Associations of Rio Negro).

The situation in São Gabriel da Cachoeira, a city in the northwest of Amazonas with 45 thousand inhabitants, most of them indigenous, is one of the most critical in the region. On Saturday, May 9, the city decreed a lockdown, shutting down all non-essential services until May 19.

The indigenous communities in the municipality of São Gabriel da Cachoeira are located at distances between 700 km and 1,079 km from a SUS ICU bed. Punya village is the most distant from an ICU bed in the whole Amazon, lying 1,079 km away from the General Hospital of Roraima as the crow flies.

This linear distance is only hypothetical because, in the forest, the actual distance to be traveled depends on the access and the means of transportation to be used, as well as on the availability of hospital beds and the organization of the health system throughout the region. In the case of São Gabriel da Cachoeira (AM), all seriously ill patients, both from the city and from distant villages, are being removed to the capital of the state of Amazonas, Manaus, although that city lies a little farther away. The health care infrastructure for indigenous people in Boa Vista, Roraima, is entirely reserved for the Yanomami.

According to data from the Brazilian Ministry of Health, the municipalities in the Legal Amazon had 1,325 Adult ICU and COVID-19-specific ICU beds available for the SUS (in 108 health facilities) in March 2020. As the intensive care units available are mainly located in the state capitals and are already overloaded, especially in Manaus, the chances of a wasted trip, or of having to wait outside high complexity hospitals until a bed becomes available, are high. It is not enough for ICU beds to exist – they must be free for incoming patients.

Serious COVID-19 cases mean patients are feeling short of breath and, therefore, immediately needing a ventilator to help air circulate through the lungs. The data analyzed also reveal a lack of ventilators as one of the major bottlenecks in indigenous people’s access to health care in the Amazon.

The Legal Amazon has 6,157 ventilators and pulmonary ventilators, 4,760 of which are available at the SUS, in 675 different health establishments, including everything from hospitals to ambulances. Of this total, almost 8% were non-functional according to March 2020 data from the Ministry of Health. The analysis by InfoAmazonia included all ventilators available in the SUS.

This vital equipment for lung oxygenation is concentrated in only a few places. Most municipalities in the Amazon (66.5%) do not have a single ventilator, which means no ventilators are available for a total population of more than 8 million inhabitants, including 203 thousand indigenous people, according to IBGE data released in 2020.

Yanomami people from the Maturacá village, located near the Pico da Neblina, on the Brazil-Venezuela border, will have to travel almost three hours by plane to get to Boa Vista if they need an ICU with a ventilator. There are no land or river connections between the village and the capital of Roraima. The second option would be a six-hour flight to São Gabriel da Cachoeira, in Amazonas. But the city with the highest population of indigenous people in Brazil – where even the mayor was infected by the new coronavirus and had to spend five days in a private hospital in Manaus – has no ICU beds whatsoever, and belongs to another sanitary district, DSEI Alto Rio Negro, which is responsible for hundreds of villages of other ethnic groups.

“We fear that the coronavirus will enter the region with illegal gold prospectors. They come and go freely. We are not safe; we need the prospectors to be removed [from our territory]”, says Junior Hekurari Yanomami, president of the Yanomami and Ye’kuana District Council for Indigenous Health (Condisi – Conselho Distrital de Saúde Indígena).

Regarding access to health care, the indigenous leader says that the Yanomami DSEI is working hard to keep the indigenous people effectively isolated. “We have a contingency plan, which follows the protocols of the Ministry of Health and the SESAI for mild, severe and very severe COVID-19 cases”, explains the Yanomami representative. 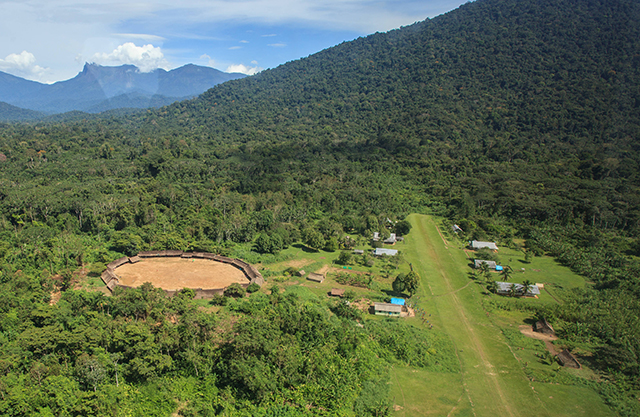 Despite being confident in the plan, the president of Condisi says that, as indigenous areas do not have an appropriate structure to deal with the most severe cases, any patients affected by more severe cases of COVID-19 will have to be taken to the capital of the state, Boa Vista. “The patients will have to be removed to health care units in the capital. We have a temporary army field hospital set up in Boa Vista”, says Junior.

“There is a great concern. There are many communities like Parafuri, Surucucu and Parima, among others, that only have an aerial connection to the capital”.

The report coming from these regions of the Amazon highlights one of the significant problems that indigenous people will face if the protection of rural areas and villages against the new virus does not work flawlessly – the need for rapid travel between great distances. The indigenous health care system has a very peculiar structure. Primary care, under the responsibility of each DSEI, is carried out in a so-called Base Center (Polo Base) and in Indigenous Basic Health Units (UBSI – Unidades Básicas de Saúde Indígena), which operate in or near indigenous villages. The health care teams are the ones that reach out to inland populations. 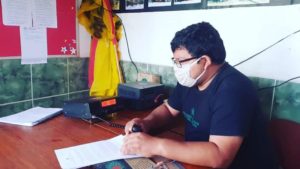 It is on this front that information on the pandemic and about how vulnerable indigenous villages are to the disease is circulating, through word of mouth, radio transmissions, and audio messages for places with an internet connection.

For severe patients, removal will always be necessary. In some cases, such as in the most distant villages in the Rio Negro region, this would mean over a week of travel if the route chosen is the river.

“The Alto Rio Negro DSEI has a single helicopter. The SESAI has been putting off the matter of providing us a small plane for some time,” says Marivelton Barroso. According to the Baré indigenous leader, the situation in São Gabriel da Cachoeira, with almost a hundred confirmed cases of COVID-19, is emblematic. “The structure here is not sufficient to handle COVID-19 cases. We need more ventilators. We have no ICU beds. Patients will have to be moved to Manaus. That is why it is necessary always to have the means for aerial travel available”, says Marivelton. 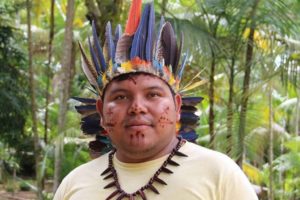 According to him, another problem faced in the region is the low number of rapid tests to identify COVID-19 cases in the villages. “We have about 180 tests so far,” he says. According to him, primary care, which was improving a little, is now being discontinued because of the pandemic. “We are highly vulnerable. For example, we don’t have a field hospital in São Gabriel so far”. The city’s hospital, which is run by the army and has seven pulmonary ventilators, has seen its oxygen supply drop to very low levels in the past few days. An urgent shipment of full oxygen cylinders had to be ordered from Manaus.

The current situation, which shows high vulnerability in indigenous villages, will be put to further test in the coming weeks, when the curve of the disease tends to rise further throughout Brazil, according to the predictions of experts who are monitoring the pandemic in the country. Although indigenous authorities from the federal government say that access to health care is guaranteed, both occasional problems and major bottlenecks in the system can surface very quickly.

During the past few days, indigenous people from Tefé, in the Middle Solimões, have complained that members of the indigenous primary care team visited communities in the region while presenting flu-like symptoms. In the Sapotal village, in Tabatinga (AM), two individuals of the Kokama indigenous people died with suspected COVID-19 in early May. But rumors suggest there would be dozens of more people infected. From now on, problems like this may lead to community transmission of the disease in many villages.

“There is no such thing as an indigenous SAMU (Serviço de Atendimento Móvel de Urgência – Mobile Emergency Health Care Service). You cannot call the emergency hotline and ask for help. Without their means of transportation for emergencies but having resources to rent flight hours and request help from the Air Force, the villages will depend on the availability of these services. The means of transportation available are another vulnerability indeed,” says demographer Marta Azevedo.

According to the researcher from the Elza Berquó Center for Population Studies of the University of Campinas (NEPO/Unicamp), who is also one of the authors of the study Análise de Vulnerabilidade Demográfica e Infraestrutural das Terras Indígenas à COVID-19  (“Demographic and Infrastructure Vulnerability Analysis of Indigenous Lands to COVID-19”; available in Portuguese only), another critical vulnerability occurs mainly in the state of Amazonas, where ICU beds are available only in the capital, Manaus. For Marta, setting up field hospitals with appropriate infrastructure to deal with severe cases inland, such as in São Gabriel da Cachoeira, would be a good solution. She defends that cities inland in the state should have ICU beds with ventilators so that access to health care becomes decentralized.

InfoAmazonia reporters asked the SESAI about these particular issues and about the plans for removing indigenous people with serious COVID-19 cases in villages, but no response from the federal government had been received as of the publication of this report.