Researchers with the University of East Anglia say the full extent of impacts to biodiversity of large hydroelectric dams in lowland tropical forest regions have been “severely overlooked”.

Researchers with the University of East Anglia say the full extent of impacts to biodiversity of large hydroelectric dams in lowland tropical forest regions have been “severely overlooked.”

Mega-dams are being proposed the world over as sustainable development projects, even though there have been plenty of studies calling attention to the fact that the emissions savings from hydroelectric dams are drastically overstated. But this is one of the first times that such an extensive study has been done on the impacts to tropical forest wildlife biodiversity, and the results are stunning.

“Previous studies have shown that large dams result in severe losses in fishery revenues, increases in greenhouse gas emissions, and socioeconomic costs to local communities,” said lead author Dr. Maíra Benchimol in a statement. Benchimol received her PhD from UEA before moving on to the Universidade Estadual de Santa Cruz in Bahia, Brazil.

Benchimol and her team studied the Balbina Dam, a 250-megawatt hydroelectric dam and power station on the Uatumã River in the state of Amazonas, Brazil. When the project was completed in the late 1980s to supply energy to the city of Manaus, it inundated 312,900 hectare (773,193 acres) of forest. 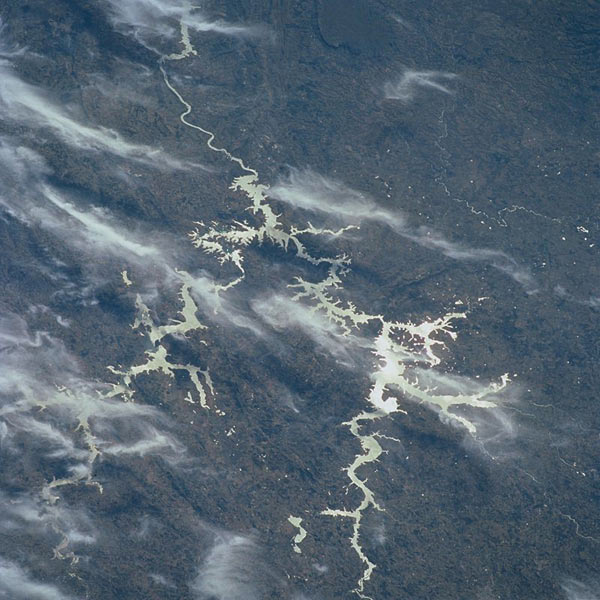 The Furnas Reservoir, the first major hydroelectric project in Brazil was completed in 1963 and flooded 1,473 square kilometers (569 square miles). This satellite image clearly shows how riparian habitat is inundated and ecosystems fragmented by large dams. More than 400 dams have been built, are under construction, or planned for Amazonia. Photo credit: NASA.

The creation of Balbina Lake, one of the world’s largest hydroelectric reservoirs, turned what was once a continuous landscape of pristine forest into an artificial archipelago of 3,546 islands. Aquatic and semi-aquatic species adapted to the river ecosystem were decimated, as were terrestrial populations in the lowlands that were flooded, which is to be expected when submerging that much forest under water.

But according to the study’s results, published in PLOS One this month, tropical dams also affect terrestrial and arboreal species in forest areas well above the maximum reservoir level.

Large vertebrates that live entirely on land or in the forest canopy, including mammals, large gamebirds and tortoises, have all but disappeared from most islands in Balbina Lake. “Approximately 70 percent of all native medium to large vertebrate populations were predicted to have succumbed to local extinctions,” on the islands write the study authors. Of the 3,546 islands, a mere 25 are likely to harbor at least 80 percent of the species surveyed by Benchimol’s team.

When tropical rivers, like this Amazon tributary, are dammed, vast tracts of forest are flooded and untold wildlife and plant diversity is destroyed. Photo credit: Rhett Butler.

Co-author Professor Carlos Peres of UEA told mongabay.com in an email that “the local extinction rates we uncovered are staggering,” all the more so because the Balbina landscape has been strictly protected for over 27 years by the largest biological reserve in Brazil (Reserva Biológica do Uatumã, established in 1990).

That means, according to Peres, that “we can consider our estimates highly conservative, because had this archipelago been created in any unprotected landscape, observed levels of species persistence would be far lower.”

Peres contends that the study’s findings should force mega-dam project planners to vastly increase estimates of aggregate biodiversity impacts. “We also know that dams in tropical forest areas erode forest carbon stocks, not only in inundated areas, but also in forest areas immediately affected by the reservoir,” he added.

“None of these sudden or gradual losses in both biodiversity and forest ecosystem services are properly taken into account in EIAs [Environmental Impact Assessments] of proposed dam infrastructure projects, even if those studies could be defined as impartial and properly conducted.” 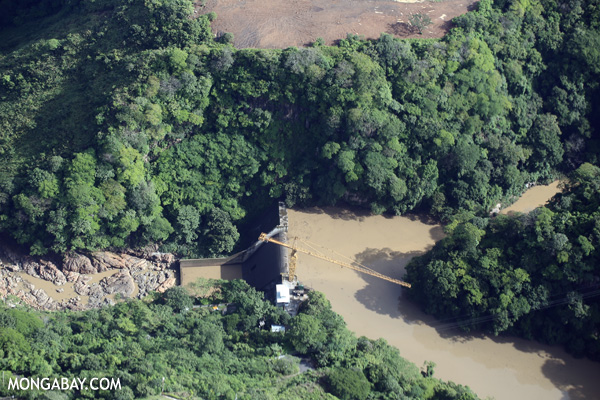 This aerial photo of a Costa Rican dam shows how such projects shatter biological connectivity, preventing migrating fish and other aquatic species from moving either upstream or down, while flooding forests. Photo credit: Rhett Butler.

Over 10 million hectares (24.7 million acres) of Brazilian Amazon forests will be permanently inundated following the planned construction of new dams, potentially leading to a colossal impact on both terrestrial and aquatic biotas at regional scales, say the researchers. That’s doesn’t include the deforestation caused by hundreds of dams proposed or being built in Peru, Ecuador, and other Amazonian countries.

The solution, Peres said, is for licensing and approval of new dam projects to depend on a thorough, multidisciplinary EIA process “that has sufficient teeth to radically modify, mitigate, or block new dam proposals.”

Tropical river basins from the Amazon to the Mekong to the Congo are currently hotspots of dam-building activity. Research Professor Philip Fearnside of Instituto Nacional de Pesquisas da Amazônia in Manaus, Brazil, who was not involved in the PLOS One study but has done extensive research on the impacts of hydroelectric dams, agreed that the present findings are further cause for Brazilian authorities to reassess the push to build mega-dam projects as “green” energy sources.

“Biodiversity impacts are a major cost of Amazonian dams, and these impacts obviously have virtually no weight in decision-making on energy development in Brazil,” Fearnside wrote to mongabay in an email. “The monetary costs for dam construction (materials, labor, etc.) is what determines the choices, aside from the influence of political donations and corruption that are now coming to light.” 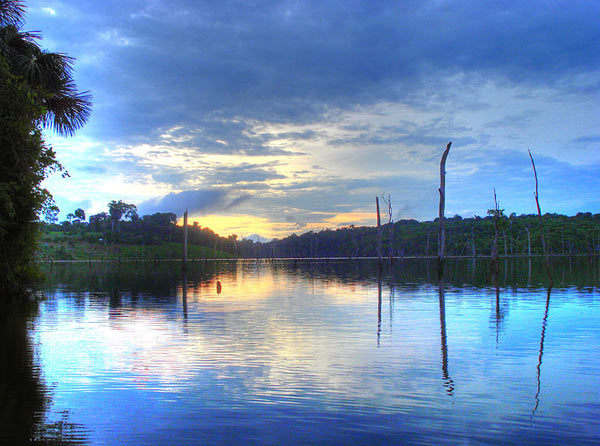 Over 10 million hectares (24.7 million acres) of Brazilian Amazon forests will be inundated by proposed dams, with colossal impacts on terrestrial and aquatic biota. Hundreds more dams are planned for the wider Amazon, Mekong, Congo, and other tropical watersheds. Photo Credit: Horácio Fernandes; licensed under the Creative Commons Attribution 3.0 Unported license.

Fearnside has demonstrated in numerous studies that the carbon emissions savings of hydroelectric dams are wildly overstated, and that the costs of building mega-dams outweigh the benefits. The PLOS One study adds further heft to that argument.

The UAE’s Peres noted that, “The Balbina Dam, for example, flooded an area of well over 3,000 square kilometers [1158 square miles] and now only supplies about 10 percent of the energy demand of a single large city (Manaus).”

In other words, governments looking for sustainable energy solutions to growing their economy and the prosperity of their people should be looking elsewhere.

“The geopolitical strategy to deploy many more large hydropower infrastructure projects in regions like lowland Amazonia should be urgently reassessed,” the authors write in the report, “and we strongly advise that long-term biodiversity impacts should be explicitly included in pre-approval environmental impact assessments.”