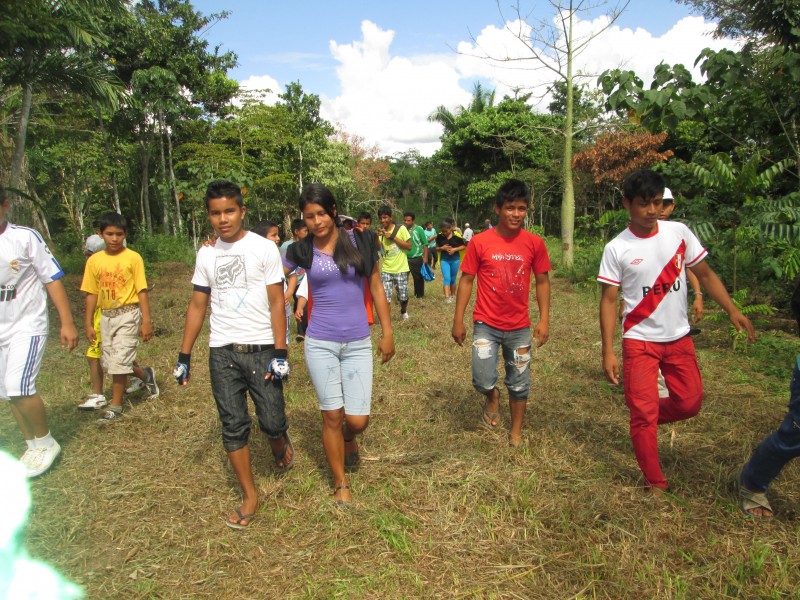 Shipibo youth in the community. Photo provided by the project.

Nonra mato jatibi saludanai, which means “greetings to all of you” in the Shipibo language. We would like to share the progress, experiences, and lessons learned from the second month of the project. The primary task of the Chariboan Joi team has been to organize the program of the cultural festival in a participatory manner. We did so with representatives from the four communities involved, Betania, Palestina, Bethel, and Alva Castro. This way, the communities identify and take ownership of this activity, so that they feel that this is their festival.

To accomplish this, a team from the Indigenous Youth Organization from the Ucayali Region (OJIRU for its initials in Spanish) made a coordinating visit, led by Douglas Tangoa from the community of Betania and who is the primary link among the communities. We met with the chief from Betania and with the educational authorities from the communities. There was a lot of enthusiasm for the proposal, and they suggested that the festival contain songs, dance, and traditional Shipibo theater. There will also be a short sporting tournament.

There were many elements that needed to be coordinated for the festival, such as transport, sound equipment, and electrical generator. In regards to the food, we arrived at an agreement with the community kitchen. In exchange for their services, we will leave them some utensils that they need. It was very nice to meet the elders that will share their stories; one of whom is a traditional medicine man and has experience in front of the cameras, and is also a relative of Douglas. Boat used to travel to the communities. Photo provided by the project.

On the other hand, we were surprised that despite the Shipibo culture is traditionally oral, they asked us for official documents about the project and formal letters of invitation. All of this will be resolved soon. It appears that the institutions created by the State, such as the community board, the chief, or the educational institutions and their boards, follow a more westernized formality.

In earlier times, there was no central figure of chief, but rather there were family clans with their representatives. Now, the chief principally represents, manages, and communicates with agents external to the community, such as businesses, NGOs, and the Peruvian State. In general and in everyday life, our communities are governed by customary laws and a peaceful anarchy, understood in the best sense of the term.

Meanwhile, in the city, we waited for the return of the team scheduled for Monday, November 3, but heavy rains started to fall for many hours per day, and for safety reasons, the boats did not depart. When the rain diminished, there were not enough passengers to depart. So the team had to stay longer, as a sort of forced vacations. The OJIRU youth missed some of their classes, but they took advantage of the time to get to know the community better, as well as to help with some repairs to the house of Douglas’ family.

Finally, they returned on Thursday, November 5. We gathered on Saturday the 8th to make the final arrangements for the festival program:

The activities of the festival itself wil be:

The youth that make the 12 best audio reports will receive a more extensive training in January 2015 to be held in the Arkana Alliance offices. The cultural stories will be recorded for editing and translation to Spanish and English.

At the suggestion of OJIRU, three students from the Intercultural University of the Peruvian Amazon will join the Chariboan team as a way to strengthen the support. In addition, Sydney Morical, Arkana Alliance volunteer will also provide support, especially for the reports. We are also waiting to confirm other offers to film the festival. Sunset in Betania after the rains. Photo provided by the project.

Thank you for reading us, and greetings to all.

Translated from Spanish by Eddie Ávila.