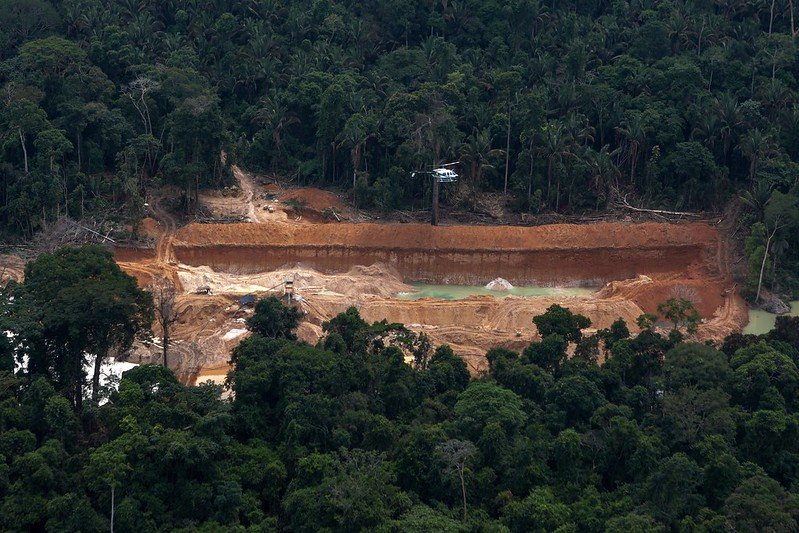 The National Mining Agency of Brazil (ANM) has in its database 436 records of mining applications within federal protected areas in the Amazon rainforest, according to a survey done until November 19th, 2019. According to Brazilian law, these are illegal records and should be rejected. For activists and environmental researchers, these requests generate pressure for a future downsizing of the protected areas.

The records found and showed on the interactive map “Mined Amazon” were obtained with the cross-checking of data from ANM and ICMBio, the Brazilian national parks service. In addition to the map, the data is published in the @amazonia_minada Twitter bot account, which will now release tweets every time a new mining request is registered at ANM. The message informs the process status, the type of mineral ore and the company responsible for the order. “Mined Amazon” is a project sponsored by the International Center for Journalists (ICFJ), in partnership with InfoAmazonia.

The records were found within 31 of the 41 most restrictive federal protected areas located in the Amazon region. These are called “full protection reserves” because of the severe environmental restrictions they bear. Mining is not allowed- according to federal law No. 9,985 / 2000, known as the National System of Protected Areas (SNUC).

Each mining record has an area to be prospected or mined. The sum of the reported areas in the 436 ANM records within the full protection PA in the Amazon is 17,400 km² (about 6,700 sq mi), an area 22 times the size of New York City. Companies are responsible for 352 orders, 89 others were individuals and in three cases there are no registered data. In 71 cases the company or the requester has no involvement with the mining activity.

The Ministry of the Environment did not answer to requests for interviews sent by InfoAmazonia. By force of federal information law, ANM answered that the mining concession processes are “inoperative most since 1985, although they remain active in the data base”. Regarding the small scale mining, ANM reports that only those with an “updated environmental license” are active.

Researcher at Embrapa, a federal agency for agricultural research, and a PhD in Ecology by the Cambridge University, Joice Ferreira has been studying the Amazon region for over 20 years. She emphasizes the importance of protected areas for the preservation of fauna and flora. In 2014 she led a team of researchers in a study on environmental mining patterns in protected areas and on indigenous lands. The result of the work was published on Science magazine in 2014.

“Ore exploration does not affect just the mining place, the environmental damage spreads out and it has numerous consequences. When they set up a mine in these regions they also make roads to get there. These roads are vectors of deforestation and forest burning. The studies point out that the recovery of these areas takes more than 30 years to complete”, explains Ferreira.

Brazil has more than 2.2 million km² of protected areas, about 12.4% of the world’s total protected regions, according to the UN database. The research led by Joice Ferreira reveals that deforestation within parks and reserves is seven to 10 times lower than areas that are not under protection. This helps to understand how these protected areas are important for the preservation of the Amazon.

Recently, the mining industry in Brazil caused the two largest environmental disasters in the country´s history: in Mariana in 2015 and Brumadinho in 2019, when roughly 250 people died after mining dams collapsed. Vale, the company responsible for these tragedies, and other giants with a history of environmental disasters in Brazil, such as Anglo American and Norsk Hydro, are among the authors of mining processes within the Amazon protected areas. There are also requests made by politicians and persons accused by the Federal Prosecutor’s Office (MPF) for environmental crimes and money laundering by selling ore, as shown by a report from The Intercept Brasil made from the Mined Amazon database.

The largest rainforest on the planet, the Amazon is home to over 10,000 species of animals already recognized and 30,000 plants. A world without this environmental sanctuary has already been imagined in recent Princeton University research. If all the rainforest was cleared, the average temperature in the region would increase by 4.5 °C and rainfall would decrease by 25%, which would make it impossible for most animal species to survive.

For the WWF Public Policy expert in Brazil, Jaime Gesisky, who has coordinated a study of mining in protected areas and indigenous lands in the past, there is a clear interest from companies opening mining processes on reducing environmental protection in the Amazon. However, the Brazilian federal government has done little to prevent this advance.

“This job of gathering the databases and finding irregular mining records is the government’s job, but they are not doing that. We realize that there is a poor structure and this helps those who are malicious. In the end, what we see is that who has a mining title within protected areas uses this to politically pressure a future reduction of the reserve”, says Gesisky.

Up to 19h November of 2019 the ANM has already registered 40 mining processes within PAs. So the first year of President Jair Bolsonaro’s government shall have the largest number of applications in the Amazon over the past four years. Bolsonaro publicly defends mining in the Amazon, a speech accompanied by his team, mainly by the Minister of the Environment, Ricardo Salles, who said to Financial Times in August this year that the world’s largest rainforest needs to be “monetized.”

More than 70% of target mining records are for gold exploration. This preference has a negative effect on the health of riverine populations because of the use of mercury in the process of separating the gold from sand. The liquid metal aggregates fine gold grains during the ore extraction.

Doctor Erik Jennings, from the Special Secretariat of Indigenous Health (Sesai) of the Ministry of Health, and Professor Heloísa de Moura Meneses, from Universidade Federal do Oeste do Pará (Ufopa)´s Institute of Collective Health, participated in April this year on a public hearing at the Environment Committee of the Federal Congress, where they explained that high levels of mercury were found in blood tests of residents of the Tapajós River region in western Pará.

Federal Prosecutors in Pará (MPF-PA), which is part of the Amazon task force, inform that “current legislation prohibits mineral exploration is fully protected Conservation Units. Administrative acts that violate this prohibition are illegal.”