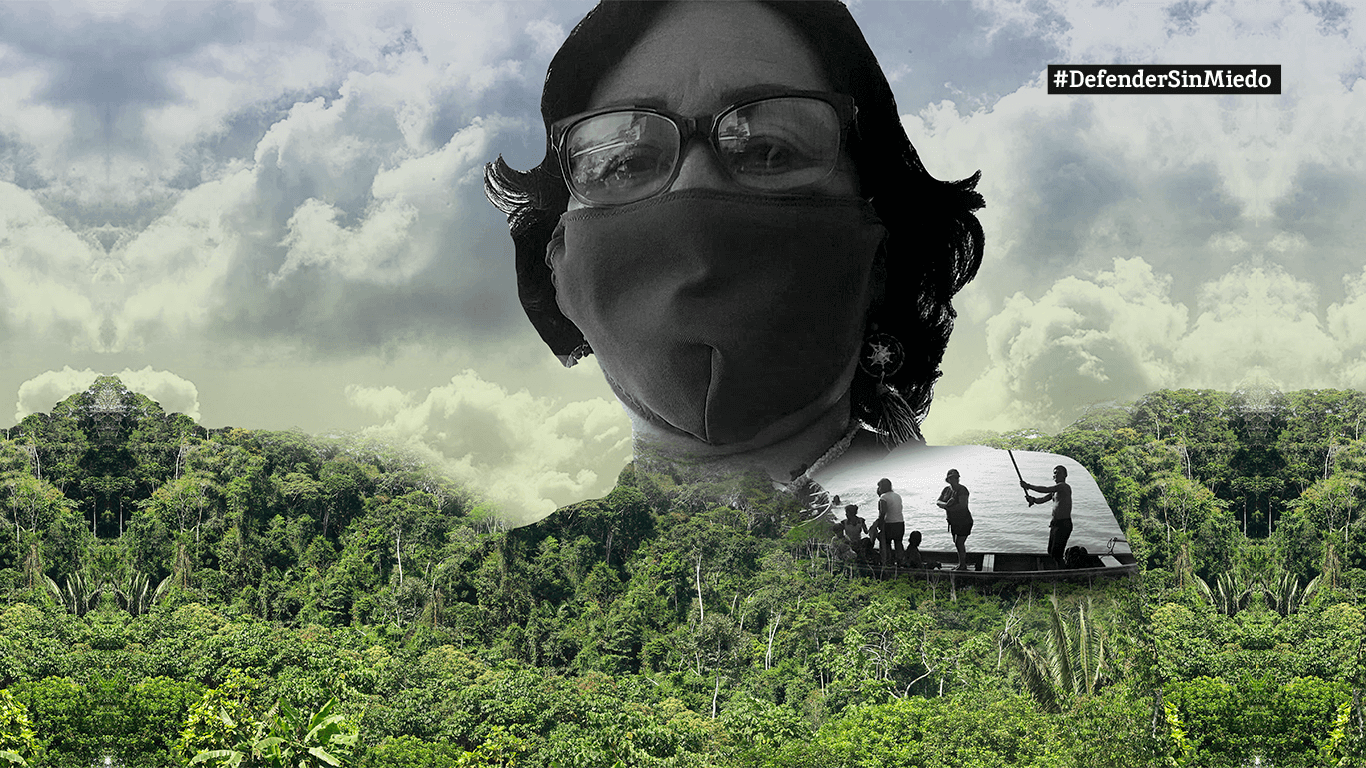 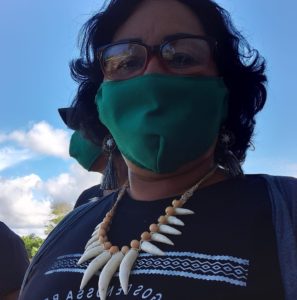 To ensure medical care for the community, Eronilde was not able to self isolate. She tested positive for Covid-19. Photo: Okas

Behind the invisibility that shrouds the Omágua, a people born of rainwater in upper Solimões, in the Brazilian state of Amazonas, there is a history of horror and humiliation. More than two thousand families live on land inhabited by their ancestors, a community the European colonizers called the Kambeba (flat-headed people). According to white people (non-indigenous), they live in the town of São Paulo de Olivença, a thousand kilometers from the capital city of Manaus. The community’s heart is the village of Wakariazal (head of many heads), which the municipal government calls the Santa Terezinha neighborhood, a name reminiscent of the Catholic heritage imposed on the native people of Brazil. Kambeba Eronilde Fermin Omágua is the chief of the Omágua, but in the eyes of municipal authorities and the invaders – loggers, garimpeiros (miners), and illegal fishers – she is a nuisance.

In the lawless Amazon region, a person who demands their rights has but one fate: death. It is a destiny Eronilde has been avoiding for more than a decade in her capacity as head of the fifteen Omágua Kambeba communities. It also explains why there are no photographs of her without a mask in this article because she fears reprisals. During her latest battle with unequal forces, in the second week of September 2020, Eronilde, a linguist and master’s student at the Federal University of Rio de Janeiro, faced off a tractor.

According to Eronilde, a team from the São Paulo de Olivença Department of Public Works arrived with heavy equipment. It plowed across agriculture fields and the jungle area under study for demarcation by the National Indian Foundation (Funai). Omágua call this indigenous territory Castanhal de Ajaratuba. Eronilde says they came in without a court order. The plan was to open a road and divide up plots to construct non-indigenous housing on land claimed by the Omágua Kambeba. “This is the second time they [have] destroyed what we care about. The first was in January,” she says.

When an area is under studies for demarcation, all the parties involved are notified the land is under dispute. “To the extent the municipal government does that, individuals are encouraged to take possession of the land. It is clearly an incentive for third parties, and will create conflict and bring pressure to bear on the indigenous community,” says Eloy Terena, a legal advisor to Coordination of Indigenous People in Brazil (APIB). Both Funai and the Federal Prosecutor’s Office have the lawful means to ensure this project and other infrastructure works will be suspended, adds Terena.

In June, Omágua Kambeba leaders reported another invasion in the region and new threats against those who confront loggers and garimpeiros. “We can no longer withstand the persecution and aggression,” reads an excerpt from a document published by the Kambeba Organization in Upper Solimões (OKAS). There are stories of invaders smashing pottery and coffins. “All my father heard was: ‘your daughter is going to die.’ He would come home and cry,” says Eronilde. According to a study by the Pastoral Land Commission, the number of indigenous leaders killed in Brazil in 2019 was the highest in the last 11 years: seven leaders, in total, compared to two reported in 2018. 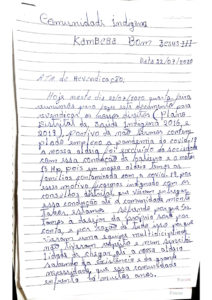 A petition handwrote in July this year after a community meeting.  It gives an account of the uncertain health care provided to the Omágua Kambeba during the Covid-19 pandemic. Photo: Okas

A committee of at least twenty people was organized to accompany Eronilde to town so she could request help from the authorities. According to Rosilene Lucas Bernaldo, age 35, who serves as the district health advisor for the community and is responsible for regional health care monitoring, evaluation, and planning, “Here, you can’t just appear out of nowhere. It has to be something extremely well planned to reduce the risk. And, even then, as soon as we go out, we see people taking pictures of us. It’s as if they are fencing us in from afar.” Who are they? Neither Eronilde nor Rosilene know who their persecutors are.

“I am persecuted and have received countless threats, but it seems I have nowhere else to turn for help,” says Eronilde, seeing as her requests for assistance have already reached the institutions that should protect her, such as the Federal Prosecutor’s Office and Funai, an organization in the service of the Ministry of Justice.

In a statement, the Federal Prosecutor’s Office in Amazonas indicated it had asked the Federal Police to investigate the possible commission of environmental crimes (initially, illegal fishing, hunting, and logging) in Bacaba, one of the fifteen Omágua Kambeba communities. The Office also received information about the highway possibly being opened up and asked municipal authorities in São Paulo de Olivença to clarify the matter.  “The legal department acknowledged having received the information and indicated it would reply shortly.” The statement also says Funai’s local coordinator is aware of the situation and promised to visit the area to report back to the Prosecutor’s Office.

Reginaldo Conceição, a geographer and researcher with the New Social Cartography Project for the Amazon Region – specialized in self-mapping for indigenous peoples and traditional communities in the Amazon – has been associated with Eronilde’s struggle for territorial demarcation for nine years. Her effort remains paralyzed. “This is an emblematic case. Here, we have a community that is prevented from growing, a town that has spread across indigenous land, and an archaeological site they need to be declared [as heritage],” says Reginaldo.

Like other towns deep in the Brazilian Amazon, a lack of urban planning and mapping of indigenous minorities as part of public policy ended up creating cities that sprout up from inside villages, “and the authorities turn a blind eye to the issue,” he adds.

Brazilian law provides for other types of demarcation beyond the traditional ones, such as creating reserves or urban villages in areas the indigenous people recognize as ancestral. In this case, the federal government acquires the land and destines it for indigenous peoples; however, this did not happen in São Paulo de Olivença. 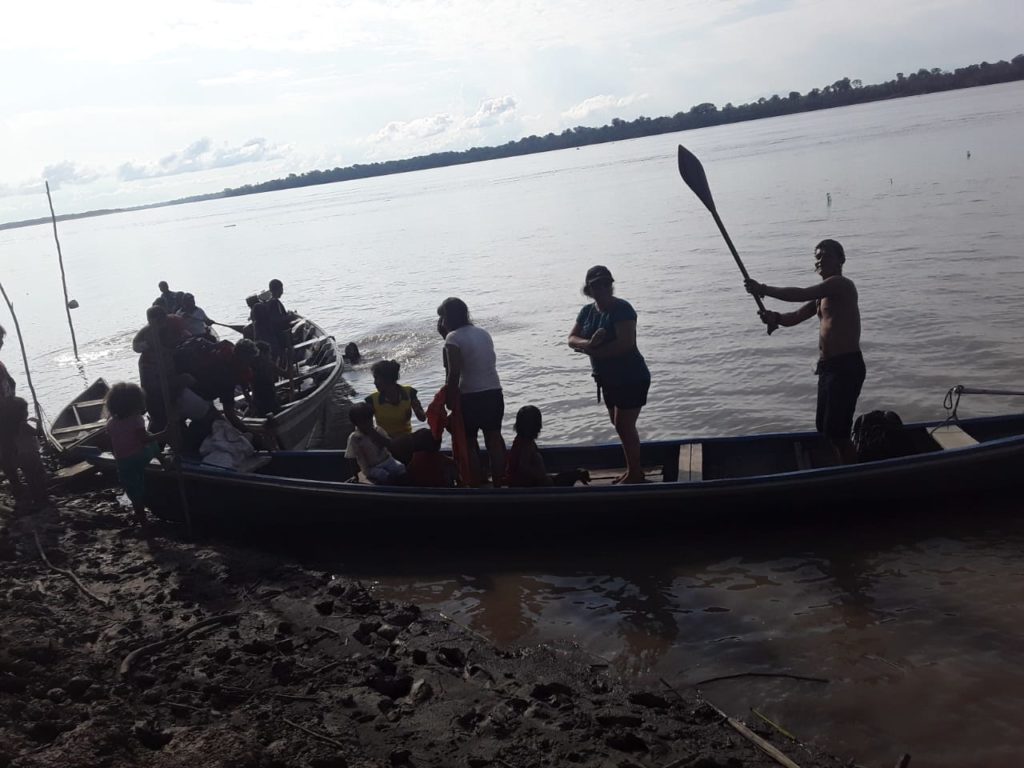 It takes a two-week trip by boat to visit all the Omágua Kambeba communities. Foto: Okas.

According to Reginaldo Conceição, the Amazona’s government shares responsibility for the situation since it has no public policy on the recognition of indigenous status. “We have a mostly indigenous population in a state that represents indigenous peoples of Brazil and the world. But the state of Amazonas either denies this make-up or pretends to deny it. Until that ceases to happen, [environmental] leaders expose themselves to ensure all rights are fulfilled.”

Not Being Indigenous in the Town

São Paulo de Olivença, in Manaus, is one of the nine cities in the upper Solimões micro-region, and more than half the population lives on fifty percent of the minimum wage. For Maria Zenaide Silva da Silva, who is 62 years old and the president of Okas, “São Paulo de Olivença is a town that does not respect indigenous people because, in its opinion, we are not indigenous.” 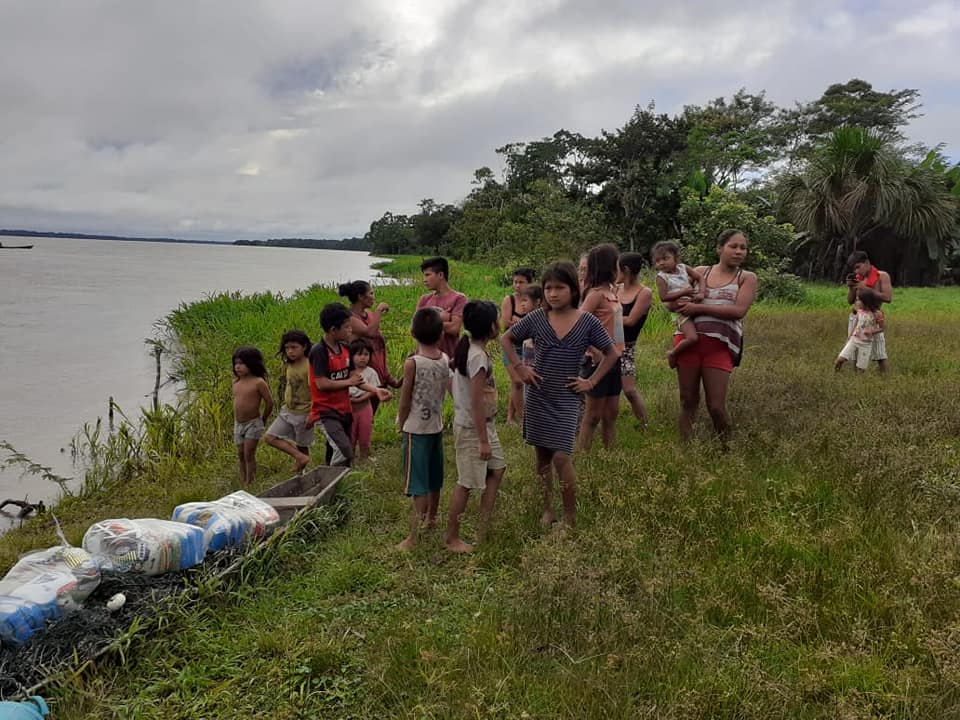 Members of the Omágua Kambeba community waiting for basic supplies to be delivered during the pandemic. Photo: Okas

Although self-identification is a right, the indigenous identity of the Omágua Kambeba in São Paulo de Olivença is being questioned. “No one stops being indigenous because they live in a town. The colonial and racist idea that only those who live in a village are indigenous has already been overcome at the international level and in our constitution, but, there, it still exists,” says Terena, the APIB lawyer.

In the struggle for access to health care, Eronilde and her husband were infected with Covid-19: “Our situation was already weak, and the pandemic made it worse.  Leaving here became even more dangerous,” she says.

In response to an inquiry by the journalist who wrote this article, the Special Department for Indigenous Health (SESAI) at the Ministry of Health reported that “the Indigenous Health Care Information Systems shows more than 36 thousand professional healthcare services were registered for the Kambeba ethnic group in several villages within the municipal area of São Paulo de Olivença.”  However, it did not clarify how many cases were handled during the pandemic. The statement indicates 52 indigenous health agents work in São Paulo de Olivença but does not specify how many, if any, are from the Omágua Kambeba ethnic group.

With little access to the internet and no resources, Eronilde does credit to the description of the Omágua found in A New Discovery of the Great Amazon River, a book by Father Cristobal de Acuña, a Spanish Jesuit. Written after expeditions to the region and published in 1641, it portrays them as a community “with more reason and better government than anywhere along the entire river.” Eronilde’s cry for help reached the Popular University of Social Movements, the National Association of Postgraduate Studies and Research on Education, and social media networks. A campaign for food and hygiene products spread throughout Brazil. It takes two weeks by boat to visit all the Omágua Kambeba communities. “The only way to improve our community is through our own strength and by defending our chief,” adds Rosilene.

In this battle of unequal forces, Eronilde devised a strategy she has used for more than a decade: the idea is to keep the soul alive, with ancestral teachings, at the expense of a wandering body. “Do I deserve to die for speaking on behalf of the people? Invaders enter our territory, threatening us with death. If I were a weaker person, they would have killed me by now, or I would have died of depression.” 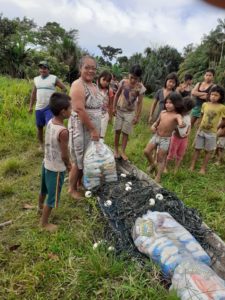 Household staples being delivered during the pandemic to the Omágua Kambeba in Upper Solimões. Photo: Okas

In 2017, Eronilde started another battle with municipal authorities, this time to reinstate the Kambeba Indigenous School Ivan Balieiro Saraiva Teacher. The school, formerly run by the community, was taken over by the municipality. As a result of this change, Omágua Kambeba leaders say the indigenous teachers were fired, and Omágua language instruction was removed from the curriculum. Rosilene claims her son was transferred to another school without an explanation.

“Language teaching is a guarantee that our children will be able to pass on this learning to their heirs and that our identity will remain alive,” says Eronilde.

The right to indigenous schooling is guaranteed in Brazil’s constitution and is the Ministry of Education’s responsibility. It is up to the states and municipalities to make sure it becomes a reality. “Under no circumstances could the municipal government do that because indigenous schooling does not depend on the will of the mayor.  It is a serious violation, and the Prosecutor’s Office must take action,” says APIB lawyer Eloy Terena. The office is already investigating the case. The mayor was contacted by the only phone available – which doesn’t ring – and via social media, but there was no response. The Ministry of Education did not respond to a request for an interview. Funai answered by email, saying it did not have “a source available for an interview at the moment.”

This article is part of #DefendWithoutFear, a journalist series that tells the stories of women and men who struggle to defend the environment in a time of pandemic. Developed by Agenda Propia, in coordination with twenty journalists, editors and allied media in Latin America, the series is made possible thanks to support from the Environmental Investigation Agency (EIA), a global NGO.