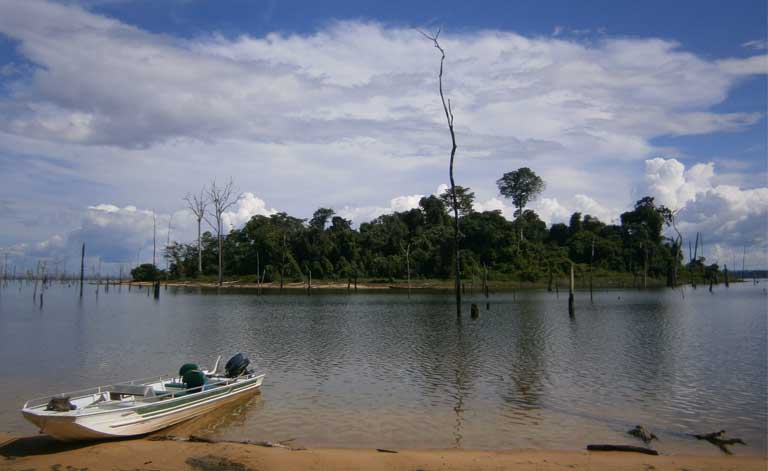 Hydropower development is booming, with controversial projects unfolding across the Americas, Africa, Asia and Europe.

A new study adds another impact to the list, one that is widespread but has so far been overlooked by dam developers: “extinction debt” — the incremental but inexorable loss of species and diminishment of biodiversity over time on islands created by reservoirs.

Hydropower developers have long claimed reservoir islands as quality habitat and as viable conservation areas — both assertions are false, according to the new research.

A global evaluation of reservoir islands

The study, led by Isabel Jones at the UK’s Stirling University, collated biodiversity data from 100 studies of reservoir islands — with time since habitat isolation ranging from 1 to 92 years — at 15 dams in North, Central and South America, Europe, and Asia.

In more than 75 percent of cases studied, dams had an overall negative impact on reservoir island species, affecting factors such as species population density, ecological community composition, and species behavior. 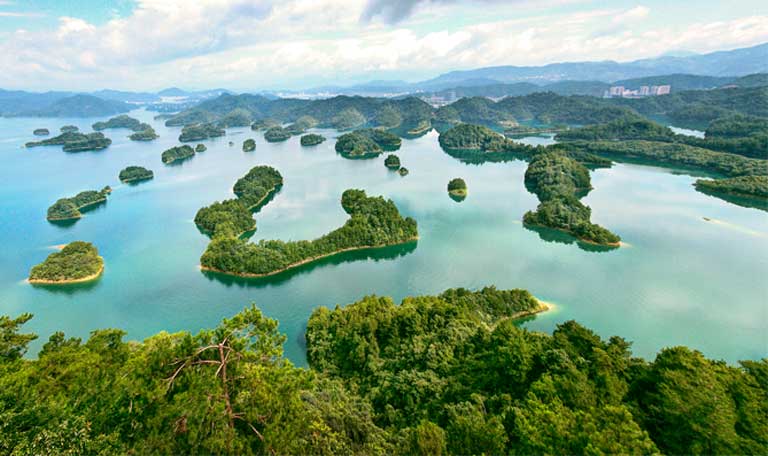 Thousand Island Lake in China, the result of a dam built in the 1950s on the Xin’an River, was one of 15 dams worldwide included in a recent study that concluded that reservoir islands should not be counted as conservation areas by developers. Photo by Bryan Ong on Flickr, under a Creative Commons CC BY-NC-ND 2.0 license

When the scientists looked more closely at a subset of data from 249 reservoir islands, which quantified the effect of dams on island species richness, they found a globally consistent pattern: the number of species declined over time, and smaller islands lost species more quickly than larger islands.

The “sustained and delayed” loss of species indicates that even if biodiversity remains high initially after island creation, there is an “extinction debt” to be paid over the following years as individual species die out.

“We found a devastating reduction in species over time in the majority of reservoir islands we studied,” Jones said. “On average, islands have 35 percent fewer species than nearby mainland sites.”

The same pattern was seen in all taxonomic groups — from birds, mammals and plants, to reptiles, fungi and invertebrates — and across all nine dams for which species richness data was available. These far flung dams were located on three continents, within tropical and subtropical forest, and tropical grassland habitats.

Wildlife sanctuaries vs. islands of extinction

Jones, a PhD. student researching the impacts of Brazilian hydropower dams on biodiversity and carbon storage, wanted to look at what happens to reservoir island species to test the common notion that islands provide safe havens for species otherwise displaced by reservoirs. Groups of reservoir islands have in the past even been designated as protected areas, as in the case of Brazil’s Uatumã Biological Reserve, which encompasses many of the islands created by the Balbina dam, built in the 1980s.

“[D]am developers believe reservoir islands to be ‘wildlife sanctuaries’ useful for conservation, but without any quantitative evidence to back this idea up,” Jones said.

The scientific team’s findings, and reality, stand in stark contrast to the erroneous “wildlife sanctuary” argument.

“These studies call for decisive rethinking by policymakers and energy strategists of future deployment of hydropower infrastructure in regions like Amazonia, given that we are providing clear evidence of widespread defaunation of forest islands,” said Maíra Benchimol, a scientist at the State University of Santa Cruz, Brazil who researched the biodiversity impacts at Balbina, but was not involved with this latest study. 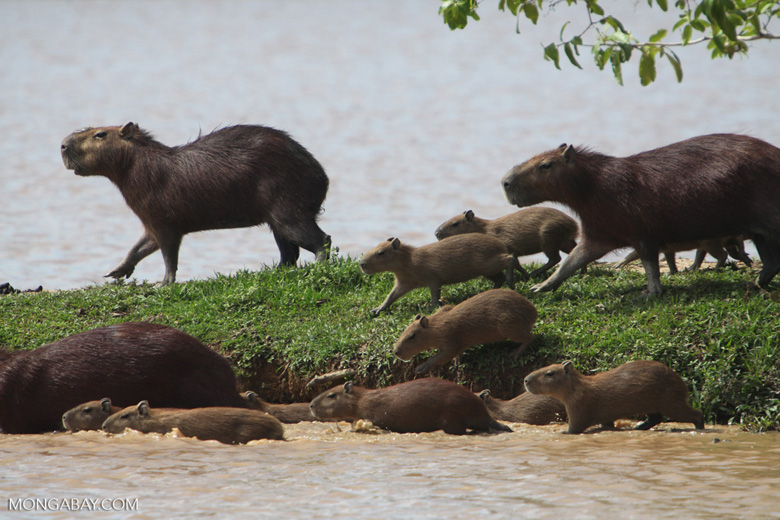 The capybara is the world’s largest rodent. The loss of species from islands also means the loss of species interactions: without predators, capybaras have turned some islands within the Balbina dam reservoir in Brazil into “nothing more than capybara grazing lawns,” lead researcher Isabel Jones told Mongabay. Photo by Rhett A. Butler

Widespread island extinctions have happened “even under a best-case protection scenario ensured by a large biological reserve,” as in the case of the Balbina dam, noted Benchimol. Other dams, without such protections can expect to “experience even higher biodiversity losses, considering the potential effects of hunting and logging.”

“[I]f a mega-dam is completely unavoidable, we suggest that habitat and biodiversity losses should be compensated by environmental offsets in the form of in situ or ex-situ protected areas,” Benchimol said.

The crux of the researchers’ argument: when making habitat loss calculations resulting from a proposed dam and reservoir, islands should be counted as a total loss, rather than tallied as areas for biodiversity conservation.

The trouble with islands

So why aren’t islands any good at conserving species? Because when it comes to sustaining biodiversity and viable populations of plants and animals, area, edges, and isolation matter.

Individual animals need a certain amount of space to survive, and, by extension, healthy and sustainable populations also have minimum space requirements that will depend on the size and ecology of the species.

Islands are often simply too small for viable populations to be maintained, particularly for larger species and those at the top of the food-chain.

An additional problem is that proportionally more of a habitat will be near the edge of an island, effectively reducing the area of forest interior habitat. In tropical forests, so-called “edge-effects” are especially pronounced, as the edges are exposed to brighter sunlight, higher temperatures, and stronger winds than the dark and sheltered understory within the depths of the forest. Edges also can be prone to higher predation, and to invasions by exotics.

The skeletons of trees submerged within the Balbina reservoir. As vegetation decomposes, methane — a potent greenhouse gas — is released into the atmosphere. Hydropower development can cause a litany of negative social and environmental impacts, despite being promoted as a source of green energy. Photo credit: Isabel Jones

With islands separated from “mainland” habitats, it’s harder for species to move across the fragmented landscape and restore populations as they suffer declines. Species adapted to the forest interior, such as understory birds, are particularly averse to crossing the open stretches of water between mainland and island.

These general relationships between species richness, area and isolation form the basis of Island Biogeography Theory (IBT), a classic ecological theory developed by Robert MacArthur and E. O. Wilson in the 1960s.

These ideas were explored further in a conservation context in the long-running Biological Dynamics of Forest Fragments Project (BDFFP) established by researcher Tom Lovejoy in 1978. That experiment in the Brazilian Amazon is monitoring how biodiversity changes in differently-sized forest “islands” over the long-term when surrounded and isolated by a deforested landscape.

However, Jones’ reservoir island findings presented a crucial difference from classic IBT theory, which says that the closer “islands” are to the “mainland” the more species will colonize them. In the case of reservoir islands, this would mean that those closer to the shore and continuous forest would have higher species richness than those farther away, because species from the mainland would re-colonize close islands more readily than distant ones.

But distance wasn’t found to have any influence at all on reservoir island species richness.

“Our results are an example of how we can tweak the IBT to encompass novel [island] environments, such as the artificial [reservoir induced] archipelagos we study, and compliment long-term fragmentation studies such as in the BDFFP,” in Amazonia, Jones said. “The fact that we find distance to be a non-significant predictor of species loss on [reservoir] islands shows that these extreme matrix (land vs. water) systems represent the worst-case scenario in terms of [habitat] fragmentation effects.”

Extinct debt, as it turns out, doesn’t only mean a reduction in the number of species on the islands. It means something even more serious: as species vanish, so do numerous, important biological interactions between species, resulting in ecosystem instability and imbalance, and the weakening of ecological resilience to environmental stressors.

“Alterations in predation levels can [for example] mean that some herbivores become hyper-abundant, which then alters the vegetation; e.g. some islands in the Balbina archipelago [in Brazil] are now nothing more than capybara grazing lawns, as the predation pressure on capybara has been reduced,” Jones explained.

Plant seed dispersal can also suffer, with large-seeded species especially affected by the disappearance of the birds and animals that usually disperse their seeds. The loss of certain tree species can have profound effects on larger-scale processes such as carbon cycling. “Alterations in tree communities in the long-term will then alter the amount of carbon being sequestered by these remnant tree communities, as well as additional degradation from impacts to the genetics of tree communities across this fragmented landscape,” said Jones, who is currently investigating the longer-term consequences of reduced seed-dispersal on Balbina’s island ecosystems.

All these knock-on ecological effects are cause for concern, especially so long as islands continue to be mistakenly valued for their conservation potential by dam developers.

“Ecosystems die by a thousand cuts, and rivers die by a thousand dams,” said Peter Bosshard of International Rivers. “Dams always fragment ecosystems, whether in the form of islands, isolated reserves or truncated rivers. Planners and decision makers need to take these impacts into account when they compare new hydropower projects with solar, wind and other renewable energy solutions.”

Jones agrees: “Dam developers [need] to acknowledge and understand that islands cannot be used for conservation, and that dam licensing needs to explicitly consider the fate of species stranded on islands,” she said. “[F]ully accounting for long-term impacts and designing appropriate biodiversity offsets could be a way to make development work for both energy needs and biodiversity.”

This report was originally published in Mongabay and is republished by an agreement of shared content. Published under Creative Commons BY-NC-ND