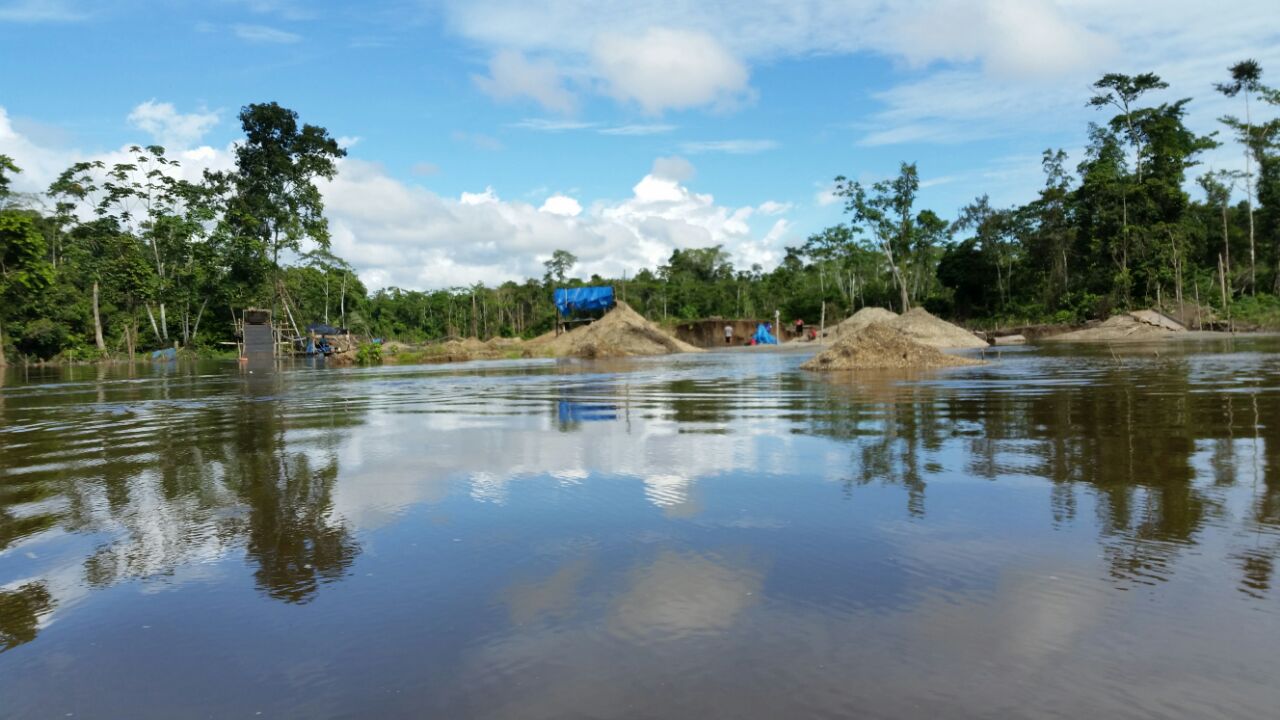 In Condorcanqui, province of the northern Peruvian region of Amazonas, the presence of illegal miners prevails in the margins of Santiago River. Edwin Montenegro, president of the local indigenous organization ORPIAN-P, denounces that illegal mining is endangering 70 thousand natives of the Awajun and Wampis ethnic groups living in Santiago-Comaina reserve.
“Illegal mining is spreading and becoming a growing danger because there is no one controlling this activity,” claims Montenegro. A team of DAR (Derecho, Ambiente y Recursos Naturales) invited by the indigenous organization could observe the machines and tools which indicate the presence of illegal miners, as well as the forest destruction left by their activity in Pastazio stream, near the native community of Yutupis.
Illegal miners are expanding their borders and advancing through Santiago’s river streams. Following the local native community references, miners extract 40 to 100 grams of gold per day, employing mercury in the process. The gold pieces are carried to Bagua and are then sold in the coastal city of Chiclayo.
Despite the legal efforts and police interventions carried out in 2014 and 2015 by the Formalizing Affairs Committee on Mining of the Presidency of Council of Ministers (Comisión en Asuntos de Formalización de la Minería de la Presidencia del Consejo de Ministros) in the province, the activity could not be deterred by the authorities.
“We extended a complaint to the Nation’s Attorney’s Office (Fiscalía de la Nación) and the Ministry of Environment encouraging them to act. This activity is jeopardizing the Amazon,” stated Montenegro. “The local communities and indigenous organizations are developing programs of vigilance and control of their territories. The government must recognize and include these efforts inside the national system of environmental management.”
According to the Ministry of Environment, more than 50 thousand hectares of forests have been logged in the Madre de Dios region because of illegal mining. In the same region, in Puerto Maldonado city, 78% of adults have levels of mercury above the standards allowed by the World Health Organization.