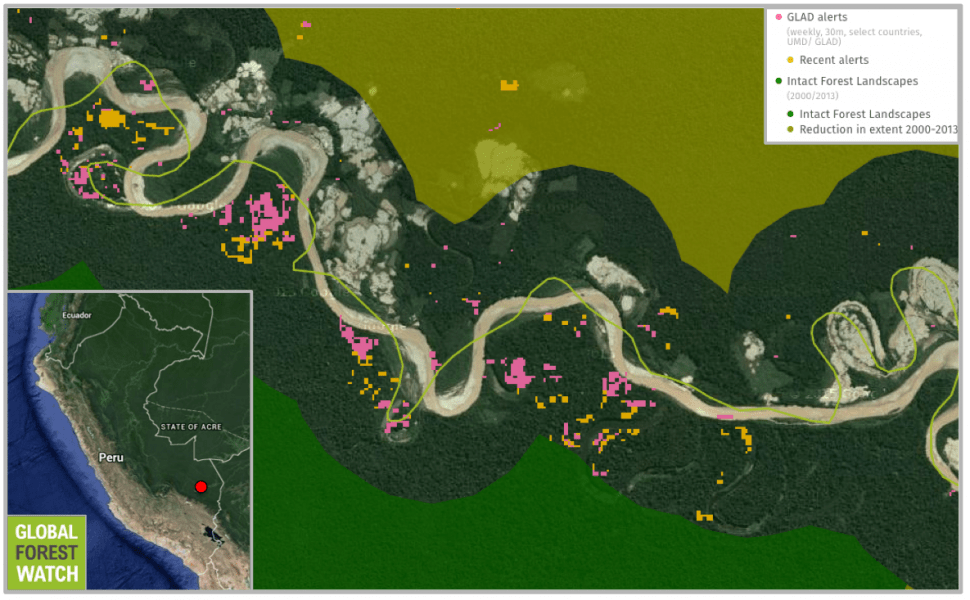 The quest for gold has been stripping rainforest from around rivers in the Amazon Basin, with not even protected areas immune from mining. The situation has gotten so out of hand that the Peruvian government launched an intervention in January, destroying a slew of mining equipment and more than a thousand gallons of fuel in the southern part of the country in effort to stamp out production. But recent satellite and aerial data show this hasn’t had the intended effect, with a big recent uptick in mining-related deforestation along the Upper Malinowski River inside Tambopata National Reserve.Artisanal gold mining is big in the Amazon. In southern Peru’s Madre de Dios Department alone, researchers estimate 30,000 miners are actively trying to glean bits of precious metal from river sediment. To separate the ore, miners commonly use mercury, a heavy metal that gloms gold particles together into a larger, more extractable mass. After it’s used, the mercury often escapes into the air or water, where it can accumulate neurotoxic levels downstream and up the food chain.Forests are also being affected by gold mining, as trees are felled to make way for prospecting and extraction. The Monitoring of the Andean Amazon Project (MAAP), a joint venture of the Amazon Conservation Association and ACCA-Conservación Amazónica, has been tracking the forest impacts of one particular gold mining surge as it edged closer and closer – and finally into – Tambopata National Reserve.

The MAAP team’s most recent report finds a big surge in mining activity along the Upper Malinowski River, which borders the reserve. Since September 2015, 130 hectares of forest has been lost, according to the report. This forest lost was particularly severe in February and March. Perhaps not surprisingly, the price of gold also surged in February, and is currently standing higher than it has been in over a year.

Even more recent data from the University of Maryland indicate tree cover loss in the region isn’t slowing, with a high number of deforestation alerts in early April. Global Forest Watch shows this latest spate of deforestation is moving closer to Tambopata’s Intact Forest Landscapes, which are large, untouched areas of primary forest that still have their original levels of biodiversity. These forests are home to a wide array of wildlife, including tapirs, jaguars, and caiman.