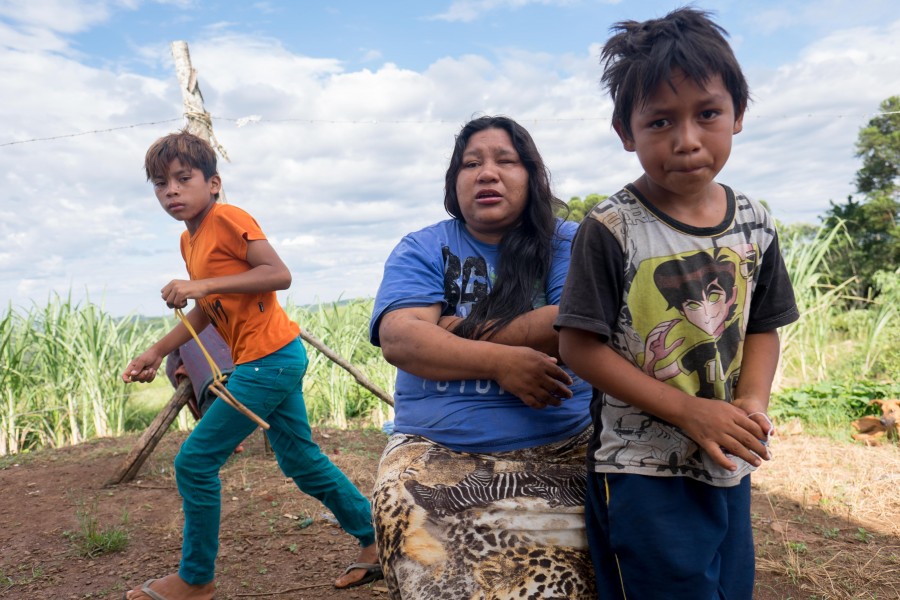 Two cases of prejudice and violence —the murders of Vitor and Dos Santos— are two extremes of a reality that is lived daily by Brazil’s indigenous population.

A small migration wave takes place every year in Brazil’s indigenous community of Condá, on the border between Santa Catarina and Rio Grande do Sul states.

It is there, in a demarcated area of ​​2,300 hectares, where 800 people of the Kaingang tribe live. Every summer, hundreds of families gather the handicrafts they’ve made throughout the year and travel to the country’s coast, where they sell it to the tourists.

Late last year, Sonia and her husband Arcelino chose to do this journey for the very first time. Like so many other indigenous people from Southeastern Brazil, they were looking for better living conditions, away from Rio Grande do Sul. During the off season, Arcelino got to spend three months away from his family, working in farms and factories throughout the region. But last year, he decided to go along with his wife and kids to Imbituba, where they camped at the local bus station.

On the evening of December 30, Sonia sat inside the half-empty bus station with their two-year-old son, Vitor, nursing him. A stranger sitting next to her –someone the family did not know– began to stroke the baby while he was being breastfed. Suddenly, he pulled out a knife and stabbed the baby. The mother sat there in complete shock, until she came to her senses and began to scream, calling for help. Meanwhile, the stranger managed to escape. Sonia ran out and hailed a cab that took her to the nearest hospital, but Vitor died soon after from his injuries.

Details about the horrifying case –and the identity of the murderer– have been difficult to find, but since Vitor was a minor, it’s being handled as a hate crime. The defense is pleading insanity.

For experts following the case, what’s remarkable about it isn’t the violence and cruelty of what happened, but the fact that the murder of an indigenous toddler has generated so little outrage within Brazilian society. According to historian Marcelo Mariano, it also demonstrates the even greater complexity of conflicts that exist in Brazil between its indigenous and urban populations.

“Urbanization, most of the time, has been about invading the lands of indigenous peoples. And this arrival came with conflicts about who is entitled to what,” explains Mariano. “Native peoples, like the Kaingang, were never paid back for their lost territories, at the same time that the urban population, usually white and of European descendent, has claimed to be responsible for the ‘progress’ of that place.”

Mariano adds that for many years in Brazil, a negative construct surrounded indigenous people: they were seen as lazy individuals, who didn’t like to work.

The most notorious hate crime against an indigenous individual took place in 2000, when five young middle-class men from Brasilia, the capital, set fire to Galdino Jesus dos Santos, a 44 year-old Pataxó indigenous man who was in town to celebrate Indigenous Day. Dos Santos died a few days later, with burns in 95% of his body.

The two cases of prejudice and violence —the murders of Vitor and Dos Santos— are two extremes of a reality that is lived daily, on a smaller scale, by Brazil’s indigenous population. In 2014, for example, there were 50 cases of death threats and assassination attempts , especially in Maranhão, Pará, Paraná, Minas Gerais and Bahia states.

In these and in other states there have also been other notorious cases of assaults against these populations, such as beatings, humiliation and intimidation, due to conflicts arising from disputes, territorial invasions and lack of territorial demarcation.

The numbers of deaths caused by hate are increasing in a fast and disturbing way in the South American country. According to the Indigenous Missionary Council (CIMI), an independent institute, in 2014 there were 134 murders of indigenous people, the vast majority in Mato Grosso, where the second largest indigenous population of Brazil shares space with lots of farms. Demarcation of territories, illegal logging, and invasions by miners and loggers are some of the reasons behind the constant conflicts between large farmers and indigenous peoples in the region.

In 2013, there were 90 killings of indigenous peoples, which represent an increase of about 40% in the number of murders. In 2015, experts at CIMI forecast that this number will keep getting even higher.

And small Vitor will become part of the statistics. It’s no wonder, then, that Silvana, her husband Constante, and their three children say they are very frightened. Every weekend they gather in the center of Chapecó to sell crafts. Since Vitor’s murder, they fear for the life of the family’s youngest kid, Laura.

“We’re very afraid. We don’t let her interact with people passing by anymore. As a parent, I am terrified, but we need to work, right? And we need security too. We experience a lot of hostility from people,” says Constante.

The data compiled in the report also indicate an increase in cases of suicides. In 2014, for example, there were 135 suicides, mostly of young indigenous people. Specifically in Mato Grosso do Sul there were 48 of such cases.

The suicide index of indigenous tribes in Brazil is six times higher than the national average, according to the United Nations. Carlos Felipe D’Oliveira, a doctor from the Brazilian Assistance Net for Suicide Prevention, says that a lack of representation, assistance and defense of their basic human rights s is also behind the high suicide rates.

“Usually what we see is that the sites with the highest suicide rate are precisely where those indigenous peoples are most disadvantaged, with high unemployment, alcohol, drugs and conflicts happening,” said D’Oliveira.

The lack of government representation is a problem faced by indigenous peoples also in public institutions. In 2014, the National Indian Foundation (Funai) had its budget and its technical staff considerably reduced. According to Funai data, its 2013 budget of $43 million was reduced to U$ 38 million the next year. The number of permanent employees decreased from 2,396 in 2010 to 2,238 in 2014.

In the meantime, criticism for institutions like Funai has grown. In the case of Vitor’s murder, for example, the infant’s mother accuses Funai of refusing to help her at first. The agency should have paid for the transport of the dead body, and this was not done over a week after the murderer took place, she said, until CIMI filed a judicial review.

“Funai was created to protect us, but I think it would work better if they didn’t intervene. They mess up situations more than help –they actually work much more as a hindrance. Nowadays, it is more of a place to employ people than one that supports indigenous policies,” said Jacson Santana, CIMI’s coordinator in Chapecó. The relation between the two institutions is not the best, with CIMI accusing FUNAI of not defending the tribes’ rights and often “making things even worse, creating obstacles to prevent government funds from getting to the indigenous communities,” says Jacson.

When Mongabay reached out to Funai, an agency spokesman said it would not comment on the case.

Since 1990, when Brazil’s national census started including indigenous peoples in their analyses and surveys, it became possible to have a clearer and more consistent perception of the life conditions of indigenous peoples, not only regarding violence, but also in terms of population, reproduction, and education.

Some critics argue that yet another type of violence faced by indigenous peoples is the failure of the government to act. In particular, the negligence to provide health assistance inside the tribal areas, which makes it impossible for indigenous peoples to access resources, medical procedures, tests and medications that could guarantee them better living conditions.

There are 79 registered cases involving a lack of assistance in health clinics, in addition to 21 deaths, revealing the precariousness of care in the Support Indigenous Health system (Casai), particularly in the states of Pará, Rondônia, Roraima, Maranhão and Bahia.

In the Condá tribe, only a few children speak Portuguese. Although they live in inadequate and precarious conditions, they have access to water, a school and a medical center. Other than that, the only institutions that seem to have more of a presence locally are the churches. A lack of sanitation as there is no garbage removal there, is another big problem faced by the indigenous people in Condá.

According to Jacson Santana, the CIMI regional coordinator in Santa Catarina, the demarcation of the territory in the city of Chapecó can be considered the first act of violence against the native Kaingang population. Indigenous peoples have lived in this area (including other nearby cities, such as Erechim, Xaxim and Goioi-en) since at least the 17th century. Chapecó has been growing as an industrial hub, and the indigenous population was forced to relocate to a more remote area.

In Santa Catarina, they have lost their main means of survival. Currently, farming is not enough to earn a living and the sale of crafts, based on the communities’ interactions with the urban populations, is the main source of income for indigenous peoples.

The dam in the nearby Uruguay River has affected their ability to fish locally. Indigenous peoples fish in small canoes, and since the river is now much deeper, fishing stock is limited. Eighty-five year old shaman José Luiz Nascimento, a spiritual leader of the village, seems to have given up. In his time, he says, integration with the “white man” was avoided because it was also unnecessary.

“There’s no more to hunt, there’s nothing left,” he laments. His niece, Marta Nascimento, no longer believes in a peaceful interaction with the non native population. More nonconformist than angry, she mentions the construction of the city’s bus station on the same site where previously their ancestors where buried. This, she says, is an example of an effort to erase the presence of indigenous peoples in the region.

“At first, this place was ours. They took us out of there, they left us in these conditions and when they built a museum they named the white people as the colonizers. What about us? Where are we in history, where is our story? Not in schools, not in the city,” she explains.