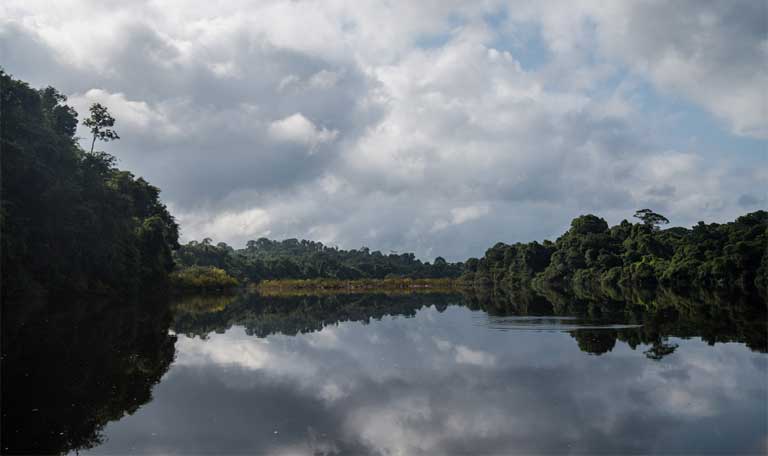 Maribel is a small, pleasant river port, situated in the Indigenous Territory of Cachoeira Seca on the opposite side of the Iriri River from the Terra do Meio Ecological Station (ESEC-TM).

The town consists of a central square, surrounded by bars painted in bright colors: blue, pink, purple, turquoise. green. Each establishment has a palm roof and large veranda, where people gather to eat, talk, drink and sling their hammocks.

As night falls in that sudden tropical way, locals chat easily with our research team about the growing scarcity of fish, caused, they say, by the increasing demand of Altamira — an Amazon basin boom town swollen to over 100,000 with the coming of workers to build the gigantic Belo Monte Dam. More fishermen are moving in all the time, they explain, and encroaching on other people’s fishing areas, something that never happened in the old days.

The early evening talkers move on to another popular topic: the restrictions imposed by the conservation authority, ICMBio (Instituto Chico Mendes de Conservaçāo da Biodiversidade). The authorities don’t go after the real culprits, they say, the illegal loggers, big farmers and commercial fishermen who flout the regulations and clean the river out with their nets.

“It’s only us, who can’t fight back”, the locals complain. “We can’t take a single fish out of the area to take to relatives in Altamira.” Although when pushed, the men do admit that the situation has improved over the last two years — though the constant monitoring still irks them.

The conversation turns next to the nearby Indigenous Territory of Cachoeira Seca and the locals’ land claims there. Some had settled in the past on lands that are now being included within the recently designated 750,000-hectare (2,896-square mile) reserve — not knowing they would one day be asked to move.

But the locals show little resentment toward the Indians, which is very unusual in this type of conflict, and they readily recognise the Indians’ right to the land. The locals even add that they’re prepared to move out. But, not unreasonably, they want the government to respect the law and resettle them on equally good plots of land and to pay them compensation for the house and crops they lose.

The government has just completed the long process of sorting out the genuine early settlers from the grileiros (the land thieves), who moved in after the reserve proposal was made to scam a quick buck. The long process of setting up the reserve is well underway but officials appear reluctant to take the final step — the (almost) irreversible creation of the new indigenous territory.

So no one has been moved out of the indigenous reserve yet, and that is generating a great deal of uncertainty. “It’s so unsettling not knowing what is happening”, complains one settler.

We sling our hammocks on one of the verandas and spend a restful night. The next morning our team heads upriver in our voadeira (canoe with outboard motor). The Iriri is low, for the rains have only just begun — they came very late this year — and our pilot has to pick his way carefully around the rocky patches.

The sun breaks through the clouds and we see storks, red and blue parrots (arara) and the occasional kingfisher winging its way along the bank. Now and again, we spot a jacaré (caiman) sunning on exposed rocks.

Surprisingly, we see few big animals. I ask Ricardo Scoles, one of the biologists, why this is so. He explains that, while this is partly because big animals are hard to see, as most live in the dense forest canopy, there is another factor, which has to do with the tropics: with no clearly defined seasons, there is no sudden explosion of primary growth (grass, pods, fruits), as happens each spring in the temperate zone, so there is no big increase in procreation, and thus no massed animals feasting along the river bank. The Amazon forest pursues a more regular year round dynamic. But, he adds, while we are seeing few vertebrates, the Amazon has a huge number of invertebrates (small animals such as ants and mosquitos), which are evident at all times to all visitors.

Soon we stop off at a mini-factory, situated at the meeting of the Iriri and Novo rivers. Here are people living and working in the Iriri River Extractive Reserve, a conservation territory in which some designated economic activity is permitted. Financial support from two non-governmental organizations — ISA (Instituto Socioa-Ambiental) and Imaflora — has allowed about 20 families to set up a small Brazil nut business.

The families collect the ouriços (nutcases, each the size of a small beach ball) after they’ve fallen from the huge Brazil nut trees. They boil the ouriços in a gigantic pressure cooker to soften the outer casing, then break them open and take out the nuts. Once the skin is removed, the nuts are dried and packaged. It’s a labor intensive process, but easier than it used to be; now, thanks to government help, the workers have some basic equipment that can keep them competitive.

The families manage the whole process, having eliminated their dependence on the regatāo (middleman), which allows them to get about 30 percent more for their nuts, and also pay less for the merchandise they buy.
The locals are starting to process other forest products, producing oil and flour from babassu nuts, for instance. Seeing their success, other family groups in the region are reproducing their scheme. A win-win situation for all involved.

Back aboard our voadeira, we motor upriver and get lashed by heavy tropical rain. We spot a dilapidated wharf, once part of a large cattle ranch called Juvilândia, named for its owner, Julio Vito Pentagna Guimarāes, a textile manufacturer from Sāo Paulo. He established his spread in the late 1970s at a time when the military government was providing generous financial support for industrialists from southern Brazil to set up Amazon cattle operations.

The rationale behind the junta’s Cold War scheme was based on the facetious claim that the Amazon was “a land without men” which needed to be “occupied” in the name of national security. At the time, a few hundred left-wing guerrillas were trying to destabilise the military government with spectacular armed actions — including the kidnapping of the US ambassador. An even smaller group (maybe 70 people or so) had also tried to set up a rural guerrilla foco along the Araguaia River, an Amazon tributary to the east of the Xingu. The effort had barely gotten off the ground, but the ruling Brazilian generals were jittery. They wanted Amazonia taken over by “true Brazilians” — meaning members of the middle class who had supported the 1964 military coup.

Even back then, it was clear to many that the scheme didn’t add up. The Amazon wasn’t empty but contained numerous indigenous groups and thousands of small traditional communities, like the beiradeiros we were heading upriver to visit. The population density was low, but that was what was required to sustain the fragile ecosystem. Environmentalists in the 1970s were already warning that the soil beneath the luxuriant rainforest was largely infertile and that slashed-and-burnt land would not sustain cattle farming for more than a few years.

Robert Goodland, the World Bank’s first full-time ecologist, was so horrified by the Amazon ranches that he wrote a book entitled, “Amazon Jungle: Green Hell to Red Desert?” But it took a long time for attitudes to change: I met Goodland in 2012 shortly before he died. He was ridden with doubts as to whether, by joining the “other side”, as he put it, he had managed to achieve anything.

Visit to an Amazon ghost ranch

Opportunists like Julio Vito — who knew little, and cared less, about sustainability — recognized a good opportunity for making money when they saw it. So he signed up his textile company, Cia. Fiaçāo e Tecidos Santa Rosa, and was given big tax incentives to create an 840,000 hectare (3,243 square mile) ranch beside the Iriri River.

When he arrived in 1979, he found (predictably enough) some 250 people already there, most of them tapping rubber. The older beiradeiros still recall the brutal violence by which he evicted them, including the “massacre of the Morro do Galego” — when the bodies of dead rubber-tappers were burnt.

From the beginning, Julio Vito had legitimate titles to only a fraction of the land he claimed, but his greed seemed to know no bounds. He set about extending his empire, often using falsified titles, and eventually laid claim to an enormous 1,365,667-hectare (5,273-square mile) area. Then in the early 1990s he enjoyed a stroke of luck — demand for mahogany soared on the world market and his ranch had a lot of it. Julio Vito signed an advantageous deal with the largest timber merchant in the region and made a great deal of money.

Unfortunately for him, land-grabbing on such a grand scale was difficult to conceal and maintain under a democratic government. In 1997, his factory went bankrupt and he stopped investing in the ranch. Moreover, when the government announced a flurry of new conservation units in 2005, his ranch happened to lie within the confines of a conservation unit where no economic activity at all was permitted — the Terra do Meio Ecological Station.

The authorities launched an investigation into how Julio Vito had come to obtain such a big chunk of the Amazon. In 2008, the MPF (Ministério Público Federal/ Federal Public Ministry) began legal proceedings against him to reclaim areas he had obtained by fraud. It was, the MPF said, one of the biggest cases of grilagem (land theft) ever recorded in Amazonia. Although Julio Vito is facing charges in both the civil and criminal courts, he is still free and reportedly living in the state of Rio de Janeiro.

I couldn’t resist paying a visit to his deserted house. The pilot warned me to be careful because the cattle Julio Vito abandoned have gone wild and are regularly preyed on by jaguars. Three of us scramble up the riverbank, make our way along an overgrown path and find the ruins. The atmosphere is eerie: in the intense heat, hundreds of white and yellow butterflies hover above the shattered tiles that were once part of the veranda.

It seems to us, another spectacular misuse of the tropical forest, following in the misguided footsteps of Henry Ford in the 1920’s when the automaker sought to establish Fordlândia, a doomed rubber plantation; or when U.S. businessman Daniel K. Ludwig in the 1970s launched the Jari project, an extraordinarily ambitious but failed endeavor to plant non-native tree species. Time and again, Amazon outsiders seek their fortunes, bending the ecosystem to their wills, but time and again they pay for that hubris as the Amazon exerts its own unbending rules.

Back in the voadeira we move on up the Iriri, to the indigenous village of Tukaya, which is holding its annual party. Our research team hopes to meet there some of the beiradeiros with whom we need to talk to complete our assignment.