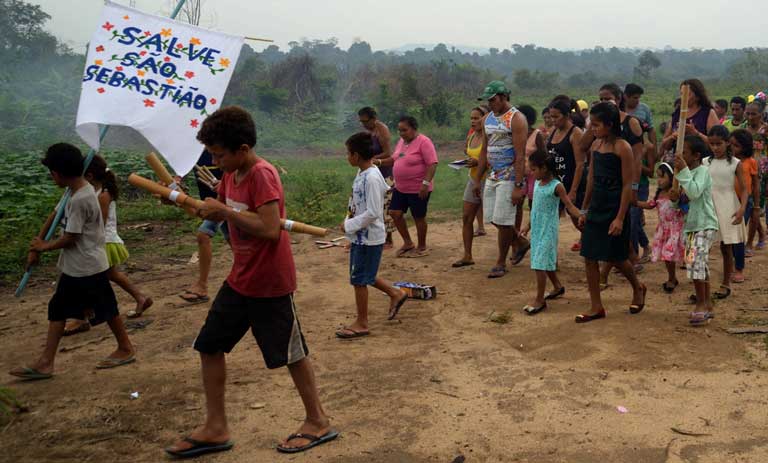 Xipaya Indians and beiradeiros (river people), are finding a life in common in the village of Tukaya on the remote reaches of the Iriri River.

Making our way up the Iriri River, we encountered another voadeira (motorized canoe). Sitting motionless along the river bank, it was packed full of indigenous Xipaya Indians — men, women and children, all on their way, like us, to the festejo (festival) further upstream in the village of Tukaya.

But they weren’t going anywhere for the moment. Their boat had broken down hours earlier. Because there is far less traffic on the river today than there was a few decades ago — before violent land thieves reached the region and drove many families out — we were the first boat to appear.

After some discussion, we towed their voadeira to the first place where help might be available, a village within the Cachoeira Seca Indigenous Territory.

A few of us walked into the village and, as the stranded travelers talked to the cacique (chief) about the best course of action, we chatted with some Arara Indians. The first topic they raised, unprompted, was their concern over how close some illegal loggers were to their village.

We were surprised to see how frightened and vulnerable the Arara appeared to be — a result no doubt of their catastrophic decline in population and many years of violent conflict with outsiders invading their land. The Arara once occupied this region in large numbers, living in relative isolation, until the Transamazon Highway was built in the 1970s. Then they were nearly wiped out by disease.

These fragile people clearly wanted decisive protective action from the government against the illegal loggers and perhaps other threats, though when and whether such action will be forthcoming, no one could say.

The village that Norte Energia built

Most of the village huts were small, built for individual families, and had corrugated roofs, almost certainly made from asbestos. They were very different from the malocas (large communal huts), with palm roofs, found in most Amazon indigenous villages.

An indigenous woman invited me into her house to have a look, and once inside, complained that the huts are hot and unpleasant.

I asked, puzzled: “Where did they come from?”

“Norte Energia [the company that built the Belo Monte dam] gave them to us”, she replied.

It struck me forcibly how hard it must be for the Arara to adjust to the momentous changes that have been imposed upon them. They were traditionally a people on the move: settling in one place, building temporary shelters with thatched roofs, clearing small patches of land and farming, then moving to another part of the forest. The very concept of a fixed village is alien to them. And now Norte Energia has built these ill-conceived, airless huts — a jarring clash of cultures. The company offered the Arara help because their land is considered to be within the area of impact of the newly completed Belo Monte dam.

At that moment, there was a commotion on the far side of the village: a hunter had arrived, carrying a large dead boar.

He shouldered both a shotgun and bow and arrow. So which did he use? Both, was the answer I got — the arrow to injure the boar and the shotgun to finish it off. Sometimes the two cultures do work together harmoniously, I mused, as the hunter expertly cut open the animal and divided the meat between families.

A solution was found for the would-be revellers with the troublesome voadeira, and soon our team continued its journey upstream, in lashing rain.

We spent the night in the house of a beiradeiro (riverside family). The heavy downpour grew into a violent storm, and our pilot was forced repeatedly to scramble down the slippery, rocky bank to bail out the boat — if it gets too water-logged, it will sink, he said.

The next morning we reached the indigenous village of Tukaya, home to the Xipaya Indians. Here, about a 100 people — both indigenous and beiradeiros —had gathered for the Saint Sebastian festejo.

The celebration was in full swing — the party will last three days — but João Carlos de Souza, universally known as Gordo (the Fat One), took time out to proudly show us the village’s new cantina (store).

The Xipaya Indians in Tukaya have eliminated the middleman — just like the families our team met at a mini Brazil nut factory downstream, and others living within the Iriri River Extractive Reserve. This allows local people to now get better prices for the rubber and Brazil nuts they sell, and also to purchase goods more cheaply. In the past, Amazonian middlemen were notorious for taking overly large slices of the profit pie, and of overcharging for vital supplies.

The cantina sells all the normal goods that local families might need — coffee, sugar, powdered milk, salt, spaghetti and more, but also something I didn’t see on earlier Amazon trips: disposable nappies. It seems that, even in very isolated communities, people — particularly women, perhaps — are quick to adopt useful new products that make life with toddlers easier.

The cantina has also introduced a new and more efficient way of collecting rubber so that the tapper, who once had to spend 14 hours in the forest every day, can collect the latex in half the time. While ISA (Instituto Socioambiental) has been the driving force behind the scheme, some funding has also come from Norte Energia, a reminder that, although the Belo Monte dam has uprooted and outraged the indigenous groups living close to it, the company has improved things in some river communities, particularly for those whose lives have not (as yet) been directly impacted by the dam and its reservoir.

As the young men and women took part in high spirited, highly contested football matches, we went into a hut to chat with two old Xipaya sisters.

The Xipaya have a long, painful history of contact with white society that dates back to the 17th century. But for many decades now, their way of life has closely echoed that of the beiradeiros. The Indians, like their white counterparts, have tapped rubber and collected Brazil nuts, and been sometimes attacked by fierce Kayapó Indians. As a result, the Xipaya have long been regarded by the beiradeiros as equals in many things, even back when Indians were widely despised. There has also been considerable contact and intermarriage.

This intermingling has come at a cost to the Xipaya, who have lost much of their indigenous identity, including their language. But in recent decades, Brazilian society has changed too: after much struggle, Indians have won clear rights and considerable access to public services, including health and education — indeed, the country’s indigenous groups are in some ways in a better position today than many other traditional populations, including the beiradeiros.

This has led to a kind of “return journey” by which some indigenous people who had lost their cultural identity, are rediscovering and celebrating their origins. This cultural revival is an intricate and often contradictory process, something that became apparent as we talked to the two sisters.

Rosa Cavalcante de Lima, the older of the two women, said that her mother spoke Xipaya, but that she personally only understood it, and could not speak it. When she was a chid, her family was constantly terrorised by Kayapó Indian raids. Her father, a rubber-tapper who had come originally from Ceará (a state in northeast Brazil) began to tap rubber at night, so fearful was he of meeting the Kayapó in the forest by day.

Once when her father was away and Rosa was about five years old, the Kayapó suddenly appeared outside her hut, menacing the family. Rosa’s mother — a small child tucked under her arm — grabbed the family shotgun and used it for the first time in her life. She shot wildly five times, killing one Kayapó and scaring the others away.

Rosa was taken in by Antônio Meirelles, a seringalista (rubber plantation boss), for whom she probably worked as a servant, even while she was still a child. She eventually married and had 27 children.

Rosa completely rejects her indigenous identity, declaring somewhat indignantly: “I’m not an Indian and I don’t like Indians”. However, some of her children are reclaiming their origins. When the Xipaya were finally given land by the federal government, one of her daughters went to live within the indigenous reserve, and Rosa, who is “not an Indian”, joined her there.

It seems unfair to many beiradeiros that the Indians, who for so long were despised by “white” Brazilians, now receive better treatment from the authorities than they do.

The beiradeiros tell me that it is wrong that the helicopter that flies sick Indians out of the indigenous village to urban medical centers, won’t take beiradeiros, even in an emergency. But, of course, that may say less about indigenous “privileges” than it does about the State’s historic negligence towards isolated, rural communities.

Although the beiradeiros’s views may be tinged with the racism that has permeated Brazilian society for many centuries, their basic demand — and one that seems very reasonable — is for equal fair treatment, with the state respecting their right to education and health, as guaranteed to all citizens in the Brazilian constitution.

The juxtaposing, overlaying and mingling of Amazon cultures and societal norms makes for a complex situation. And as the day progressed, my confusion grew.

The afternoon’s highly competitive football matches were followed by the procession of Saint Sebastian. The adult Indians paraded ceremoniously around the village, carrying an image of the saint decked out in colorful bunting, while they intoned old Catholic hymns. Every time the procession stopped, youngsters set off noisy rockets with great delight.

For many years the festival of Saint Sebastian was held in Catholic communities throughout the Amazon basin specifically to raise spirits and to ward off indigenous attacks. So here we were, in an Indian village, watching indigenous people take part in an anti-indigenous ritual.…

People love forró, a popular dance that originated in northeast Brazil, and almost everyone, indigenous and non-indigenous, danced spectacularly well. I found it hard to take my eyes off the dancers as they swirled and spun in the meeting place at the center of the village.

It started to rain heavily, but no one cared. There was no cachaça (sugar cane rum) but plenty of beer, though few were interested and no one got drunk. Everyone seemed satisfactorily intoxicated with the joy of dancing together — Indians and beiradeiros. It was a great evening.

The next day, soon after sunrise, the families said their farewells, got back in their boats and departed, most going upstream, like us.