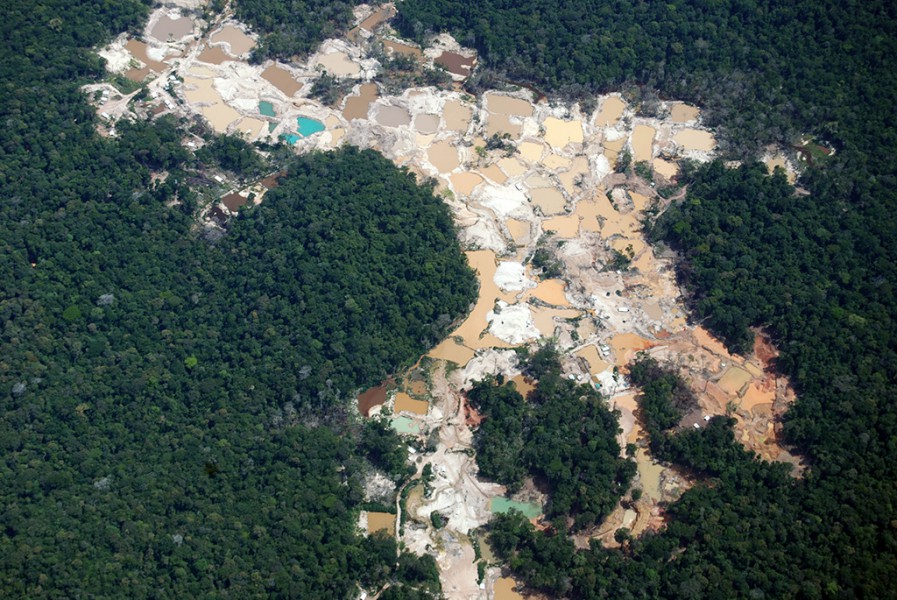 A new report finds gold mining in Suriname increased by 893 percent between 2000 and 2014.

Record high gold prices over much of the past decade have triggered a massive gold rush across much of the Amazon basin, resulting in the destruction of thousands of hectares of pristine rainforest and the contamination of major rivers with toxic heavy metals. A newly released report published by the Amazon Conservation Team titled “Amazon Gold Rush: Gold Mining in Suriname” explores the rapid expansion and impacts of gold mining in Suriname through cartography and digital storytelling.

It finds that from 2000 to 2014, the extent of gold mining in the South American country increased by 893 percent.

While the Amazon rainforests of Brazil and Peru are well-known, Suriname’s vast and ancient rainforests remain one of the world’s best-kept natural secrets, according to the online report. But demand for the age-old elemental metal threatens to destroy them.

“According to our calculations, deforestation caused by gold mining has been growing steadily since the turn of the century and rapidly in the past five years,” GIS and Web Development Coordinator at the Amazon Conservation Team, Rudo Kemper told mongabay.com. The average rate of deforestation since 2000 is close to 3,000 hectares per year, but in 2014 an estimated 5,712 hectares of forest cover was lost to gold mining, he said. The REDD+ for the Guiana Shield regional collaborative study on gold mining shows similar trends, reporting a near-doubling (97 percent increase) of deforestation from 2008 to 2014 and attributing a total of 53,668 hectares of deforestation to gold mining in 2014.

The Guiana Shield, as Kemper puts it, is one of three cratons of the South American tectonic plate. “It is a tropical rainforest region covered with unique table-top mountains called tepuis,” he said. “It has the largest expanse of undisturbed tropical rainforest in the world, and one of the highest rates of biodiversity.” Suriname is among the most forested countries in the world, as the report highlights. In 2012, 95 percent of the country’s entire area was classified as forest. Globally surpassed only by its neighbor French Guiana, Suriname’s pristine rainforest harbors numerous unique species of fauna like the Guianan cock-of-the-rock (Rupicola rupicola), the famous blue poison dart frog (Dendrobates tinctorius), the red-faced spider monkey (Ateles paniscus), and the pale-throated sloth (Bradypus tridactylus). Jaguars, tapirs, and giant anteaters also call the region home. The mineral-rich Greenstone Belt region, where most of the gold mining in Suriname takes place, is primarily composed of the forested highlands of the Guiana Shield. Conservationists worry that deforestation caused by rapidly expanding gold mining activities is negatively impacting the habitat of many unique species.

Since the 1960s, development and resource extraction incursions into the country’s interior have become commonplace. These encroachments have taken the form of dam-building, logging, bauxite mining, and as of the turn of the century, small-scale and industrial gold mining, the report says. Given that it is one of the world’s smallest countries, Suriname’s annual rate of gold production might not compare to that of larger countries like South Africa, China, Russia or Peru. But relative to its land area, Suriname actually ranks tenth in global gold production.

Two different kinds of gold mining are prevalent in Suriname, according to the ACT report: artisanal and small-scale gold mining, and industrial operations. The former refers to a wide variety of activities ranging from the mere use of pans to sift through soil, to the deployment of modern machinery like tractors, hydraulic engines and sluice boxes. Of these, it is the latter mechanized forms that make up the majority of small-scale gold mining and production in Suriname. Since small-scale gold mining is often illegal, statistics (including those from the USGS) do not include estimations on this type of mining because it is more challenging to measure. This means that the actual gold production rate may be much higher than what is portrayed by available data, and much of it may be taking place without adequate health and environmental regulations.

Caught in the middle of the environmental devastation caused by the expansion of gold mining in Suriname are the indigenous and Maroon [contemporary descendants of formerly enslaved Africans] communities, whose livelihoods are increasingly tied to partaking in mining activities within their territories, the report says. It can also have detrimental consequences on human health.

“In addition to being a driver of deforestation, small-scale and industrial gold mining carry significant threats to ecosystem services and human livelihoods, both proximate to the source and further afield,” the authors write.

Mercury is the key component by small-scale mining operations to separate gold from soil. Designated by the World Health Organization as among the top 10 chemicals of major public health concern globally, exposure to mercury can result in severe neurological damage. Across Suriname, standards for mercury dumping are generally lax, with mercury-tainted mud from ore-separating sluice boxes often allowed to freely run into nearby creeks and subsequently downstream to larger waterways. Once it settles out of the water it is far from gone; mercury is a persistent substance, lingering in soil for thousands of years.

It can also linger in the food chain via a process called bioaccumulation. As predatory species eat many smaller, contaminated organisms, mercury levels become magnified higher up in the food chain. That is why, in aquatic ecosystems, large predatory fish are most likely to carry high quantities of mercury. Unfortunately, these species are also typically favored for human consumption, which makes the consumption of fish the primary cause of ingestion-related mercury exposure.

Predatory fish like the Anjumara and piranha are reservoirs for mercury – but they’re also key sources of protein for Surinamese people living in the interiors and are considered delicacies on the coastline. Scientists in the country are now warning people against overconsumption of these species because of the risk of mercury exposure, according to the report.

The threat of mercury isn’t being felt just around gold mining sites. With many of Suriname’s rivers flowing north to the Atlantic, where the larger cities are, much of the country’s populace is at risk of exposure. According to the report, the largest districts of Paramaribo, Wanica and Commewijne together constitute about 400,000 people – nearly 74.5 percent of the country’s total population in 2012. The Surinam, Commewijne and Saramacca Rivers flowing into these heavily populated districts are all significantly affected by high-intensity gold mining further upstream, the report says.

One study referenced by the report calculated that 10,000 to 20,000 kilograms of mercury is released into Suriname’s environment annually, and that the amount of mercury “outgassed” to the atmosphere surpasses the amounts deposited into streams.

“A few scientific studies have examined the mercury levels in human hair, both in areas proximate to gold mining activity and further afield,” Kemper said. “The most recent study on the subject, conducted by a team of Surinamese biologists, looked at mercury levels related to small-scale gold mining in four Matawai villages along the Saramacca River. The team recorded elevated levels far above the norm in all four sites, where fish consumption is a regular part of the diet. While the levels are not yet at a stage where symptoms are abundantly obvious, they certainly indicate high risk.”

Disturbingly, he said, the highest level was recorded in the Pusugrunu village – the most remote site – roughly 40 kilometers upstream from the nearest gold mining site. “This suggests that mining-related contamination can have negative effects on human health far from where the actual mining is taking place. This has serious implications for the entire population of the country…”