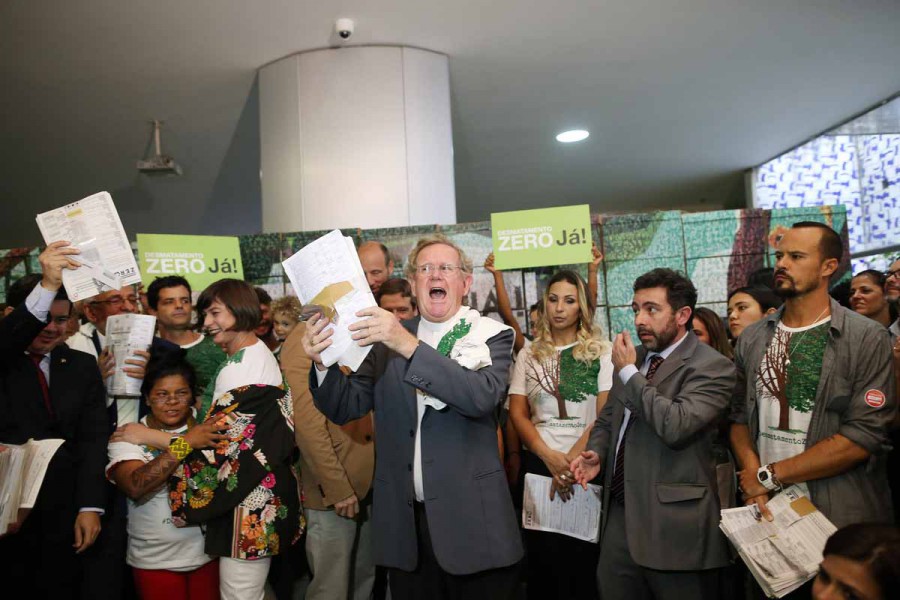 For the past three years, Greenpeace Brazil has been collecting signatures in support of a bill that would establish zero deforestation as the law of the land.

Last Wednesday, accompanied by a crew of religious leaders, celebrities, senators and other supporters of a ban on the felling of Brazil’s forests, the activist group formally presented the draft legislation to the Brazilian Congress — signed by 1.4 million Brazilians.

“We submit this bill to Congress and now it’s time for them to reflect on the will of the people,” Greenpeace’s Cristiane Mazzetti said in a statement.

“There is enough space for development without cutting down more of our forests. Democracy is strengthened by ensuring access to natural resources for everyone, for our generation and future generations. This is why stopping the destruction of our forests is essential.”

The annual rate of Amazon forest loss in Brazil has slowed by 75 percent since the early 2000s, but roughly 5,000 square kilometers (1.2 million acres) of rainforest is still destroyed every year. Greenpeace says that’s the equivalent of 700,000 soccer fields — and even some lawmakers joined the group in saying that it’s time for the country to make it official policy that economic development not be done at the expense of the Amazon.

“I signed the petition in 2012 and I admit that I was anxious to see it completed,” Senator João Capiberibe said in a statement. “This is certainly an important step toward the objective of zero deforestation in Brazil and then beginning a new project for developing the country, one that is not based on environmental destruction.”

A recent analysis by Paulo Moutinho of the Amazon Environmental Research Institute and Steve Schwartzman of the Environmental Defense Fund supports Greenpeace’s assertion that zero deforestation is entirely possible for Brazil to achieve without foregoing economic growth.

“Brazil succeeded in reducing Amazon deforestation by more than 80% since 2005 while maintaining robust growth in beef and soy production,” Moutinho and Schwarzman write. “There are at least about 56,000 km² of degraded cattle pasture in the Amazon that can be reclaimed for agriculture, as well as ample scope for intensifying cattle raising and improving yields, freeing up even more land.”

Brazilian President Dilma Rousseff has pledged to eliminate illegal deforestation and restore 12 million hectares (about 30 million acres) of forest by 2030 as part of broader efforts to combat climate change, itself a major threat to the wellbeing of tropical rainforests the world over.

But zero illegal deforestation by 2030 is a “considerably less ambitious goal” than many Brazilian states have already proposed for themselves, Moutinho and Schwarzman say.

Pará, for example, a major agricultural state, has adopted a target of 80 percent deforestation reduction by 2020 and zero net deforestation thereafter. And Acre state, which still retains nearly 90 percent of its original forest cover, “is already implementing the most ambitious and successful system of payment for environmental services in the tropical world focusing on forest conservation,” Moutinho and Schwarzman write.

Greenpeace and other forest advocates, like Bishop Guilherme Antônio Werlang, want Brazil’s federal government to take those ambitious efforts as examples and commit to swifter action to end deforestation of the Amazon altogether.

“We have to change the economic model and create the Brazil that we want,” Werlang said in Greenpeace’s statement about the delivery of the zero deforestation bill to Congress. “It is an important time for us to continue to press forward, not only for small changes, but to consider a profound change.”