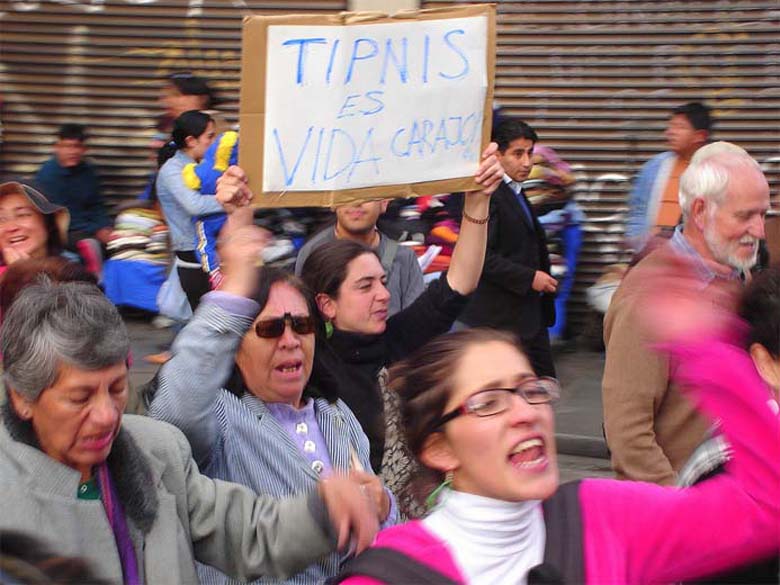 More than four years of sporadic political conflict came to a head in June 2015, when Bolivian President Evo Morales announced plans to resume construction on a controversial highway that would pass directly through a national park and protected indigenous reserve known as TIPNIS. The proposed highway would strike into the heart of 2.5 million acres of highly biodiverse rainforest, home to protected species and ancestral ways of life.

Construction of the road stalled in 2011, when environmental NGOs and indigenous activists launched a two-month, 425-kilometer (264-mile) protest march from the Amazonian city of Trinidad to Bolivia’s capital city of La Paz. The protest, which drew thousands of parading marchers and the attention of global media, forced the government to put the project on hold.

“The road, my friends, will be realized,” Morales declared to a group of supporters at a June 5th rally. Most notably in his statement, the president took the time to specifically denounce the environmental and indigenous rights NGOs that opposed the highway, accusing them of being “financed by the U.S.”

That’s a contention that contains but a kernel of truth. Though some NGOs in Bolivia do receive U.S. financing, many of those most vocally critical of TIPNIS do not, explicitly in order to avoid such attacks from the Bolivian government.

Such accusations by Morales and the ruling party, claiming that critical environmental NGOs are tainted by foreign influence and “eco-imperialism,” have multiplied in recent years, as the government has sought to balance an economy almost entirely reliant on multinational extractive industry rents to fund popular government social programs. This economic model conflicts with the need to protect natural resources and with the demand for more sustainable development and stronger environmental protections, a vision and agenda many NGOs have taken up.

It also comes after a major, government sponsored agricultural conference this April that launched a push for the rapid expansion of soy and other crops at the expense of rainforest. That initiative was justified with an appeal to establish autonomous food sovereignty as a means of throwing off historic colonial shackles and foreign food dependence.

The rhetoric of eco-imperialism

Bolivia’s leftist president, Evo Morales, and his ruling party, the Movement Toward Socialism (MAS), were voted into office in 2005 by a unified left: diverse movements that came together to oppose privatization and free market economic policies. Morales described his victory as an opportunity to throw off the mantle of 500 years of colonialism, with indigenous groups gaining autonomy and significant recognition from their government for the first time.

That drastic political change established a new constitution that enshrined leftist values, laid a foundation for state-led economic development to benefit all Bolivians, and recognized “Mother Earth” as “a collective subject of public interest” – a declaration that gave environmental NGOs hope of a long denied seat at the table.

Although Morales achieved much of his popular mandate, many environmentalists and those hoping for a radical new economic system were left disappointed. NGOs have pushed for a change in direction, as they seek a voice in the government, better oversight and environmental protections.

The MAS rose to prominence fighting entrenched, conservative opponents and neoliberal economic policies pushed by foreign powers. To combat more recent opposition from the left, Morales and his party have refined a form of anti-colonial rhetoric, emphasizing the importance of Bolivian autonomy. The president and his party now put down critics by casting activists and environmental NGOs as unwitting (or sometimes willful) agents of foreign imperialism, jeopardizing Bolivia’s – and the Bolivian people’s – right to chart their own course for development.

The mistrust of some environmental NGOs, and attendant pushback against them, often comes from a frustration over longstanding environmental injustice. Developing countries like Bolivia, for example, bear a greater burden of the impact of climate change, while contributing fewer emissions. Bolivian politicians argue that wealthy countries were able to rapidly industrialize and thoroughly exploit their natural resources before turning around and demanding limits to carbon emissions and economic development in poorer countries.

Other times, however, the Morales administration’s criticism of environmental NGOs or indigenous opposition is a type of scapegoating meant to discredit criticism of large-scale development projects that would wreak havoc on the environment and local communities.

Critics note that the government is willing to embrace foreign influence from multinational oil, dam construction, and mining companies, while slapping international NGOs with an eco-imperialist label.

Building a case against eco-imperialism

Morales’ vice president, Álvaro García Linera – a Mexican-educated intellectual of European descent and a committed socialist who fought alongside indigenous Maoist rebels in the Tupac Katari Guerrilla Army in the early 1990s – in 2013 wrote a Marxist treatise defending and establishing a theoretical justification for the government’s TIPNIS policy, and more generally for its land use and natural resource policies.

In the expansive critique of foreign interests and environmental nonprofits working in the Amazon, Vice President Linera defines NGOs not as “Non-Governmental Organizations” but as “Organizations of Other Governments on Bolivian Territory.”

The document argues that the “pseudo-environmentalism” or “environmentalism for the poor” of the TIPNIS objectors amounts to a subtle manifestation of colonialism, and is a product of the imperial reach of the United States. The Morales administration long maintained that the U.S. was actively trying to exert its will in Bolivia from within, especially through the appropriation of USAID money (until that organization was given the boot in 2013). More recent crackdowns against environmental NGOS have likewise been justified by this perception.

“Are we Bolivians having problems with the protection of Mother Earth?” Linera asks. “Probably. But those are difficulties that we ourselves will know how to resolve; we will never accept the principle of shared sovereignty in any piece of Bolivian territory. Whoever at this point is opposed to the presence of the state [of Bolivia] in the Amazon is in fact defending the presence in it of the United States. There is no in-between position: that is the dilemma in which the fate of control over the Amazon region is being played out in Bolivia, Peru, Ecuador, Colombia and Brazil.”

He makes a case for “Bolivia for the Bolivians,” but in practice, he embraces government supported highway, energy, and mining projects built by multinational corporations home based in China, Brazil, and elsewhere, without giving equal support to international and local environmental NGOs and indigenous protesters.

Linera argues that the developing world should have less of an obligation to enact environmental protections than the European Union or the United States.

“If the European companies and the U.S. government are so concerned about the environment and the conservation of the world’s forests, why do they not stop consuming wood and drastically reduce their auto industry and all types of production that emit [carbon dioxide] into the environment?” he writes. “Why not stop importing minerals whose production contaminates the natural environment? Why not stop importing foods whose production promotes deforestation of millions of hectares of jungle? If they were to close those markets we would drastically reduce deforestation and global warming, and there would be no need to blame the poor countries, as they are now doing, to make them shoulder the burden.”

Some critics argue that Linera is biased against Bolivia’s lowland indigenous people, who have long struggled for autonomy from the state – an issue he largely ignores. The Vice President also brushes aside the very real environmental impacts of unrestricted development – significant long term degradation of natural systems and of the national economy – in order to achieve short term economic gains.

“Evo Morales gained international attention by staking a strong discursive claim that global climate change was the result of the sins of capitalism,” Devin Beaulieu and Nancy Postero write in an essay critical of Linera. “He posed indigenous ‘cosmovision’ as the alternative: he declared that by embracing indigenous notions of reciprocity and communality, societies could learn to ‘live well’ and sustainably instead of trying to live ‘better’ than others through increased consumption.”

Beaulieu and Postero argue that Morales’ promises to the country’s indigenous majority were partially negated by the contradictory imperative to redistribute the nation’s bio-carbon wealth for the good of its citizens. “Indigenous participation in the process of change… has created enduring expectations that go far beyond García Linera’s pragmatic geopolitics,” they write. “These demands for alternatives continue to shape the future, whether García Linera recognizes it or not.”

Linera also criticizes foreign NGOs for politicizing indigenous identity in order to advance environmental goals. He argues that NGOs and environmental activists often haphazardly approach centuries of complex identity issues, and create artificial and simplistic dichotomies by dividing indigenous people into two classes: the “true” indigenous groups: those who are environmentally friendly and live in protected territories; and the “bad,” sub-indigenous people: those who favor development projects. He proves his point by noting that many individuals who support the TIPNIS highway identify themselves as being indigenous, and speak indigenous languages. He asserts that NGOs and activists impose strict definitions on what counts as indigenous, based on their own interests and agendas.

Linera’s arguments raise interesting questions without immediate answers. Has a foreign environmental narrative, promulgated partly by international NGOs, helped define an indigenous identity that is beneficial to those groups’ environmental aims? Have these NGOs unwittingly created a schism between traditional indigenous communities living in protected territories and market-oriented peasants, who also speak indigenous languages and celebrate indigenous customs, but want to improve their economic status? In leftist countries like Bolivia, where governments have nationalized many industries and begun to redistribute hydrocarbon and mining profits to the poor, what impact might ending extractivist practices have on the anti-poverty programs that keep those governments in power?

Political questions aside, there seems to be little doubt that Morales’ hopes to revitalize the moribund TIPNIS highway will meet with strong NGO and indigenous opposition in coming months. As that conflict heats up again, so too might the eco-imperialist rhetoric.

Morales and Linera are not alone in directing strong rhetoric at the international environmental movement. It is becoming a sure fire populist argument for gaining public support around the globe.

Peru has gone so far as to accuse environmentalists, and indigenous people opposed to mega-dams and mega-mining projects of “terrorism.”

Kenya is working to pass legislation that will hamstring international NGOs, cutting off all funding from abroad, and potentially shutting down environmental and social programs in the country. Those policies are defended by Kenyan President Uhuru Kenyatta as a way of protecting the nation’s national security, and preserving its autonomy against terrorists.

South Africa has argued that wealthy international environmentalists opposed to a coal power plant there ignored the country’s development needs. And numerous governments have criticized carbon trading schemes as a way to force poor nations to stay undeveloped, while allowing rich nations to pollute with impunity.

Critics of the United Nations Reducing Emissions from Deforestation and Forest Degradation program, operating in Brazil, Indonesia and elsewhere, have argued that the institution “allows the powerful capitalist countries to maintain their current levels of production, consumption and, therefore, pollution” and “strips ‘traditional’ communities … of their autonomy in the management of their territories.”

Leftist movements have long posed themselves against the forces of imperialism that still run strong in the world. As Bolivia and other leftist countries wrestle with the pragmatic challenges of power and governance – continuing to decide how, and whether, to cash in on their natural resources – NGOs and environmental activists may increasingly find themselves fighting critiques of imperialism that they are more used to levying than facing.