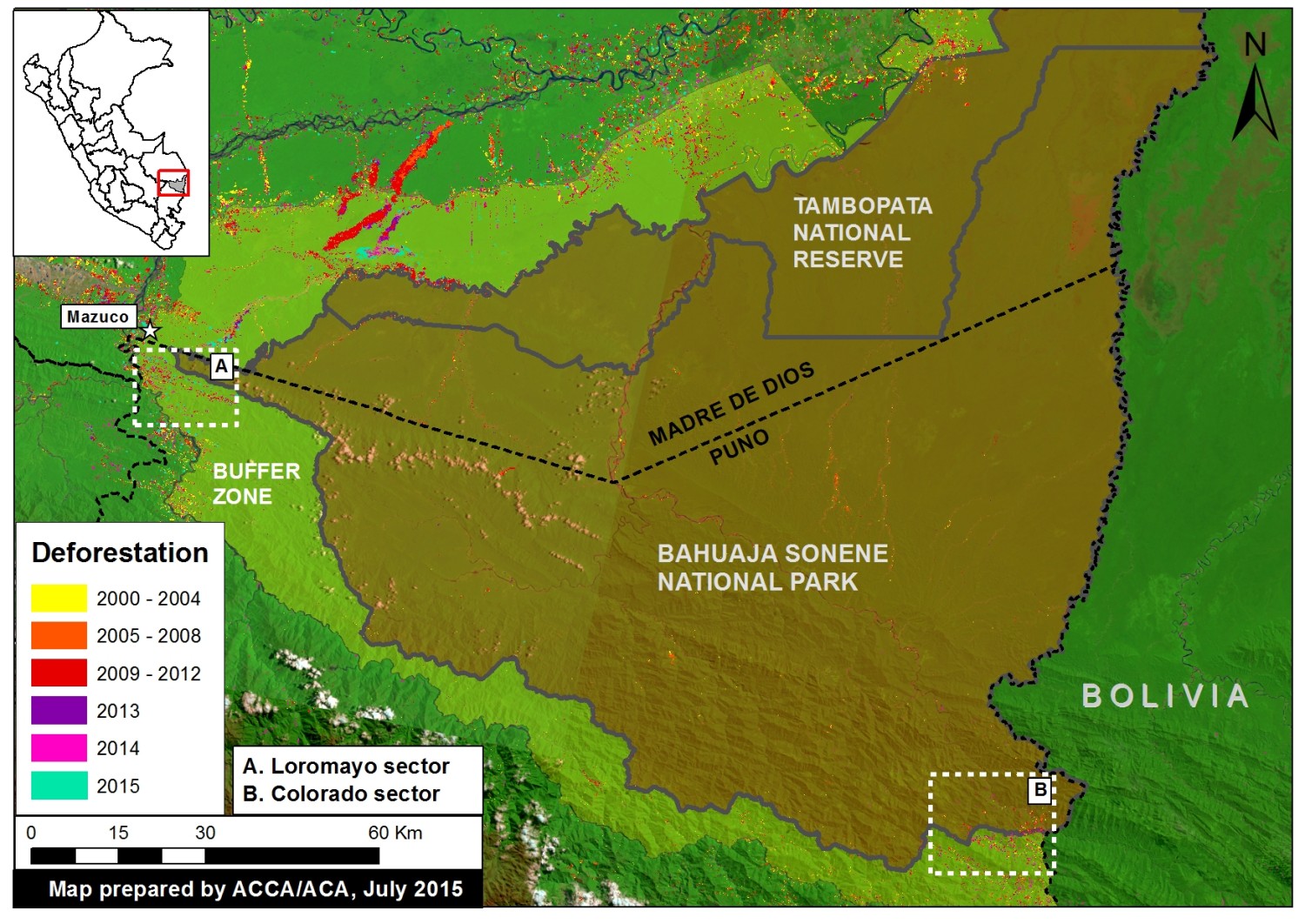 MAAP found increasing deforestation in the buffer zone and inside the Park. Were documented recent deforestation of 538 hectares within the Park and an additional 2,100 hectares in the surrounding buffer zone.

Here, in MAAP #10, we show the results of a deforestation analysis of two sectors of Bahuaja Sonene National Park and its surrounding buffer zone. The Park, which covers an area of more than 1.6 million hectares in the regions of Puno and Madre de Dios in the southern Peruvian Amazon, is an area of high biological diversity.

Image 10a. Deforestation detected in and around Bahuaja Sonene National Park and its buffer zone. Please note that Zooms “A” and “B” are described in more detail below. Data: SERNANP, PNCB, USGS.

We highlight two key areas within and around Bahuaja Sonene National Park where deforestation grew substantially between 2013 and 2015:

1) Sector Loromayo, located in the buffer zone immediately outside the western section of the Park (see Zoom A). We estimate that more than 1,000 hectares (ha) were deforested since 2010, peaking in 2014 (331 ha). This expanding deforestation entered the Park in 2014.

2) Sector Colorado, located in the southeastern section of the Park (see Zoom B). We estimate, between 2001 to 2014, the deforestation of over 530 hectares inside the Park and over 1,170 hectares in the surrounding buffer zone. As in Loromayo, there was a notable increase in deforestation starting in 2010, with the peak occurring in 2014.

In both sectors, Loromayo and Colorado, we identified that one of the main drivers of deforestation is coca cultivation.

In the following maps:

Any variation of green in the satellite imagery indicates areas of forest cover.

The colors pink (2014) and turquoise (2015) indicate areas that were deforested in the last two years based on our analysis of Landsat imagery using CLASlite forest monitoring software.

Image 10b. The expansion of deforestation along the Loromayo river in the buffer zone to the west of Bahuaja Sonene National Park. Data: SERNANP, USGS, IBC, PNCB.

As shown in Figure 10b, we identified a striking pattern of deforestation in the sector Loromayo, locatedbetween the Malinowski and Chaspa rivers in the Park’s western buffer zone in the department of Puno. Note that the deforestation entered the Park in 2014.

In this area, we documented the deforestation of 1,005 hectares since 2010. This deforestation peaked in 2014, with 331 hectares, including 1.8 hectares within the Park. Not much data is yet available for 2015.

Please note that we previously reported on the advance of gold mining deforestation seen in Image 10b along the Malinowski River in MAAP #5.

In the recent UNODC (United Nations Office on Drugs and Crime) report “Monitoreo de Cultivos de Coca 2014” [Coca Crop Monitoring 2014], it was reported that the Loromayo sector (coca zone San Gabán) has a medium to high density of coca cultivation, with a recent increase of 5.9% since 2013. Therefore, we conculde that coca cultivation is one of the major drivers of the observed deforestation.

Image 10c displays the most recent UNODC coca density data (upper panel) in relation to a recent high resolution satellite image of the area (lower panel). Deforestation is rapidly expanding in the vicinity of the Park boundary. Unfortunately, in this image, a few clouds cover the small area where the deforestation recently entered Park.

As seen in Figure 10d, deforestation is well established and increasing in the sector Colorado, located in the southeast section of Bahuaja Sonene National Park, with the Region of Puno. Our analysis in this area extended from the upper Tambopata River to the Azata river.

Sector Colorado: Presence of Coca Cultivation Inside the Park

According to a recent report by the Wildlife Conservation Society (WCS), the deforestation in the Colorado sector was a result of the advance of agriculture and livestock cultivation in the area. Moreover, according to the recent UNODC report noted above, this sector (coca zone Inambari-Tambopata) also has a high density of coca, with 108 ha on the interior of Bahuaja Sonene National Park and 1,610 ha in the buffer zone, likely making it one of the major drivers of the observed deforestation.

In response to this article, SERNANP (the Peruvian protected areas agency) issued this statement:

[The sector named ‘Colorado’ is a sector located within the Bahuaja Sonene National Park, which currently is zoned as a ‘Restoration Zone.’ Said zoning is extended to those zones which have been affected due to anthropic activities and require supplementary studies so as to determine their definitive zoning designation.]

[We should note that severe pests have been detected in this sector which affect the cultivation of fruit such as oranges and coffee; this has lead the population settled in the park’s buffer zone to have no choice but to replace these crops with the cultivation of coca in some cases.]

[The head of the Bahuaja Sonene National Park has identified and issued a warning about this situation in a timely manner to the relevant entities so as to initiate its eradication work; notwithstanding, SERNANP has also undertaken joint work with local authorities and the management committee of the natural protected area to combat this threat, which figures in the 2015-2019 Master Plan of the area in question. The latter contains strategies such as the construction of a checkpoint and guard post for permanently monitoring this situation.]

[Likewise, dialogue roundtables and the development of sustainable economic activities have been promoted that can replace the illicit crops and guarantee quality of life for the population of Colorado.]